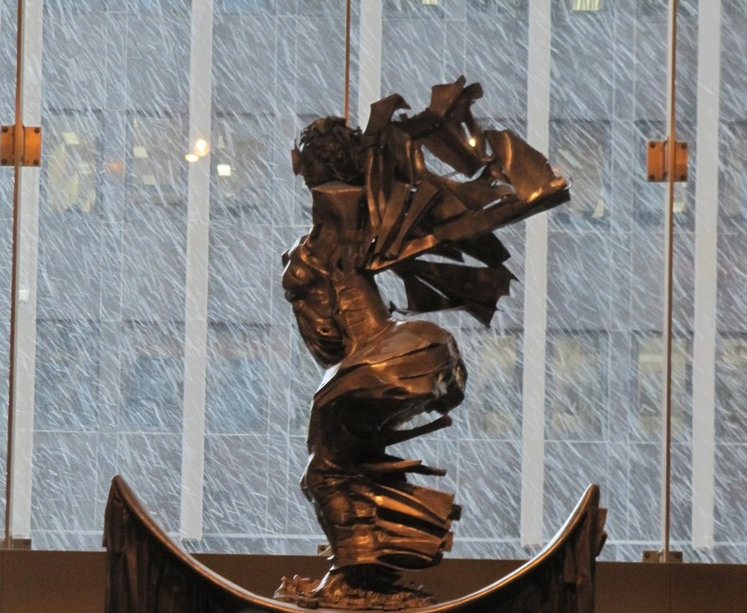 Trigger Warning: Some may find the content in this blog upsetting.

On Feb. 14, 2019, a bill was introduced in the U.S. Senate to name the African Burial Ground in Lower Manhattan “the African Burial Ground International Memorial Museum and Educational Center.” The bill noted that the burial ground is “unlike any other anthropological and symbolic site in the United States or the world”—and it “includes DNA samples from the remarkably well-preserved human remains that will enable researchers to trace the home roots in Africa” of the individuals buried there.  It is New York City’s first below-ground landmark and the United States’ “earliest and largest African American cemetery to be rediscovered.”

In September 1991, demolition and excavation began, without any fanfare, for the erection of a 34-story federal office building in Lower Manhattan in the block bounded by Broadway and Reade, Elk and Duane streets. At the time, I was involved in a project and was working on the fifth floor at 22 Reade St., and excavation was taking place right along the northern foundation of the building. Shortly after excavation work began, human skeletal remains were unearthed from a depth of 25-30 feet below the surface. It was then that things took a dramatic turn which no one had anticipated. As word got out, there was a tremendous outcry to preserve the site. There was something sacred about the place at that time.

More than 16,000 people from far and wide signed a petition, and a daily vigil was held at the excavation site in a determined effort to preserve it. The protest bore fruit; in 1993, the site was designated a National Historic Landmark. On Feb. 27, 2006, about 15,000 square feet of the excavated area was preserved and a National Historic Monument erected.

African Burial Ground National Monument: Forging Ties to the Past

In 1640, the African American population (consisting of both free men and slaves) in New Amsterdam (then owned by the Dutch) represented about 20 percent of the city’s entire population. The Dutch treated slaves better than other slaveholders— the Dutch allowed the slaves to be baptized, learn to read, earn wages, in some cases own property, and marry legally. Because of “mortuary apartheid,” however, they could not be buried in the same cemetery as whites. They were buried in the 6.6 acre African cemetery north of the official graveyard served by Trinity Church.

When the British captured New Amsterdam (part of a much larger area that included Delaware, New Jersey, New York and Pennsylvania) in 1664, they renamed it New York and introduced a rigid justice system on the Africans. Some of the new laws are on display in the museum. The rights and privileges enjoyed under Dutch rule were revoked.  Although the Dutch recaptured the area  in 1673, it was ceded back to the British in 1674 by the Treaty of Westminster, which renewed the 1667 Treaty of Breda. The Dutch gained Surinam in South America.

The cemetery was in operation from the 1630s to 1795. There were no laws to protect and preserve African burial grounds; under the British, the city expanded and the burial ground was covered over by a concrete jungle of buildings and streets.

Advocates and protesters for preservation of the sacred site were able to successfully use a 1966 law that required  “a cultural resources survey that includes field testing on a site” when construction using public funds was to be undertaken.

Meanwhile, scientists and scholars from institutions such as Howard University became involved in monitoring the excavation and recording the process through meticulous measurements, photographing and documenting each discovery at the exact site during the 1991-92 excavation period. They then removed  the remains, catalogued, studied and stored them.

The analysis of the 419 exhumed skeletal remains and artifacts  revealed that 9 percent of the children were under age 2, while 32 percent were below the age of puberty. The analysis also determined that of the 59 percent of adult burials, nearly two-thirds were males and that the death rate among men and women ages 15-25 was higher compared with the European population. This would hardly be surprising given the hard physical labor Africans had to endure. The photographs of all the remains, with annotations showing age and sex are displayed prominently in the museum and interpretative center.

All 419 exhumed remains were reburied in 2003 in a Rites of Ancestral Return Ceremony in the 15,000-square foot national monument. The actual burial sites are easily recognized by mounds at the site. The estimated number of burials in the entire cemetery is approximately 15,000. In some cases, coffins were buried in layers, which I was able to see firsthand when I was allowed privileged (but restricted) access down in the active excavation site.

The displays provide interesting insights into the lives and deaths of the people who were buried there. Found on one of the coffin lids is a heart-shaped design made from 93 nails. It proved to be a Sankofa—an Ashanti symbol meaning “return to the past to build the future.” The origin was traced to Ghana and Ivory Coast.

The African Burial Ground National Monument and Interpretive Center (opened Feb. 27, 2010) at 290 Broadway, is administered by the National Park Service and is free to the public. A visit includes access to three areas: first to the visitor center and viewing of a 20-minute video (optional) and then the interactive centers; then explore the building’s rotunda with artifacts and a history of the cemetery posted on large print panels, and an informative circular inlaid design, the New Ring Shout, on the marble floor; finish with a walk through  the 0.34 acre outdoor grounds of the National Monument (made up of the Ancestral Chamber, Circle of the Diaspora, and Ancestral Reinterment Ground).

Chaitram Aklu
Chaitram Aklu is a retired NYC veteran teacher and writer. He writes on a variety of topics ranging from education, environment and labor and current events. He currently serves on the Executive Board of the United Federation of Teachers. ...

Chaitram Aklu is a retired NYC veteran teacher and writer. He writes on a variety of topics ranging from education, environment and labor and current events. He currently serves on the Executive Board of the United Federation of Teachers.