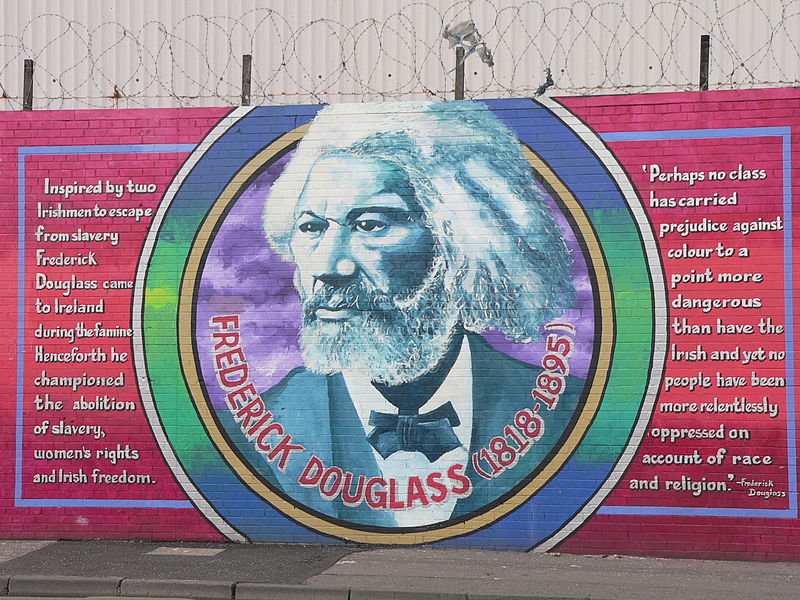 A mural of Frederick Douglass in Belfast, Ireland. Photo by Laurence.

Black History Month for Kids: Exploring the Power of Storytelling

Use this month to deepen cultural responsiveness in both your content and practice. We support your efforts with these thoughtful lesson ideas that you can use to discuss black history and the relevance to current events, and to think critically about how you can embed underrepresented groups into your teaching all year round. Read more about the history of Black History Month, and review the lessons and resources below that you can use in your classes this month.

Check Out These Listenwise Resources

Listening to stories helps connect students to specific moments in time in an authentic way, and helps create empathy. One teacher used an audio story about the Civil Rights Movement, describing the desegregation of a Central High School in Little Rock Arkansas, and said,

“The violence and struggle to gain voting rights became real after listening to the emotions of the speakers and sounds from the event. It really helped students develop empathy, which is harder to do through traditional texts.”

Explore the stories below and consider implementing them in your lesson planning this year.

Angie Thomas: ‘The Hate U Give’ and the Call to Activism
The novel is closely modeled after Thomas’ experiences as a student, and on the stories of several of the young men who have been victims of racialized police violence in recent years. In this audio story, the author talks about what inspired her to write this groundbreaking novel.

Langston Hughes: Letters From Langston Hughes
Listen to this interview with one of the editors of this collection to learn what Hughes’s letters reveal about who he was as a man, an African American, and a writer.

Ernest J. Gaines: Fighting Illiteracy with ‘A Lesson Before Dying’
In Ernest J. Gaines’s 1993 novel “A Lesson Before Dying,” the central character, Jefferson—a young black man living in the segregated South in 1948—is accused of murder and faces the possibility of the death penalty. Listen to the audio story to learn how Gaines’s character develops “pride through learning.”

Zora Neale Hurston: A Guide To Florida From Zora Neale Hurston
Listen to learn more about Hurston’s experience working for the WPA and how specific areas in Florida have or have not changed over the past 70 years.

Listen to learn about the first African-American woman to be published in the United States.

Boxer Muhammad Ali is being remembered as a great athlete and humanitarian. He became a conscientious objector to the Vietnam War, converted to Islam, and he became an ambassador for his religion. He never apologized for his beliefs, even at great personal cost.

Maya Angelou was an author, poet and icon. She grew up during segregation and used her work to empower and give voice to the African American community.

Listen to learn about the racial segregation that existed when Marian Anderson was not allowed to sing in a segregated venue 1939.

Environmentalist and human rights activist Wangari Maathai led the fight against mismanagement of Kenya’s natural resources. Listen to hear about her work for peace and democracy.

Malcolm X was both charismatic and feared, and he advocated black power and pride as a response to white racism. Listen to hear about the life and legacy of this influential black leader.

Harriet Tubman escaped slavery and then used her freedom and the Underground Railroad to free more than 70 slaves. Tubman lived a purposeful life fighting slavery and also fought for women’s suffrage after the Civil War.

Frederick Douglass was born into slavery in the early 1800s, escaped, and went on to become a famous abolitionist. A renowned author, speaker, and activist. Listen to hear how Douglass’s use of photography furthered the abolitionist cause.

Achebe on the ‘Heart of Darkness’

Nigerian novelist Chinua Achebe’s 1958 novel “Things Fall Apart” provides a contrast to Conrad’s “Heart of Darkness,” describing the British colonization of Africa from the perspective of Africans. In this audio story, Achebe talks about how his understanding of “Heart of Darkness” changed over time.

Nelson Mandela, former South African President and leader of the anti-apartheid movement, was also labeled a “terrorist.” As protests against the government grew from peaceful to violent, learn more about why Mandela was forced to call for armed struggle by listening to this story.

In 1947 Jackie Robinson was the first African American baseball player to play in Major League Baseball. He was an older player and was not seen as the best player but had a strong character that helped to successfully integrate baseball.

This story remembers a time when basketball was not integrated. Listen to learn about the climate in the 1960s and how Perry Wallace, the first black varsity athlete in the Southeastern Conference, survived and thrived. Warning: Quotes in this story contain strong language.

Lorraine Hansberry: Motivation for Writing ‘A Raisin in the Sun’

The play “A Raisin in the Sun,” which reveals the struggles black families faced as they attempted to achieve the American dream in the 1950s. Listen to this story to learn Lorraine Hansberry’s motivation for writing this iconic story.

Listen to this story about the American space program and group of African American women who played a key role in the program’s success.

James Baldwin’s writing on race, class, and the Civil Rights era in America urges audiences to consider how racial tensions and attitudes continue to influence us.

Author Richard Wright is well known for his novel “Native Son” and autobiography “Black Boy.” Listen to learn more about the impact Richard’s Wright’s experiences and writing had on his reader.

This artist made it his life’s goal to make black culture indispensable and undeniable to the art world. Marshall has dedicated his career to combating the historical under-representation of black culture in history.

Experience the Life of a Slave

Listen to hear how this museum aims to tell the true story of slavery, and what we as a nation can learn from it.

In 1741, New York City was shaken by an uprising led by African slaves. Listen to hear about the history of the revolt and what the revolt of 1741 can tell us about society today.

The Nubian Pharaohs came from the area of modern-day Sudan and ruled Ancient Egypt for a half century. Listen to learn more about the “Black Pharaohs” and their remarkable history.

The Power of Slave Narratives

First-person slave narratives were the first honest account of the experience and were used by the abolitionist movements to show the reality of slavery. Listen to learn more about the first-person account of freed slave Olaudah Equiano, shared in his autobiography.

Slaves and the American Revolution

National Museum of African-American History and Culture opened in Washington D.C. in September 2016. Listen to hear more about this museum displaying 3,000 artifacts that recently opened to the public. 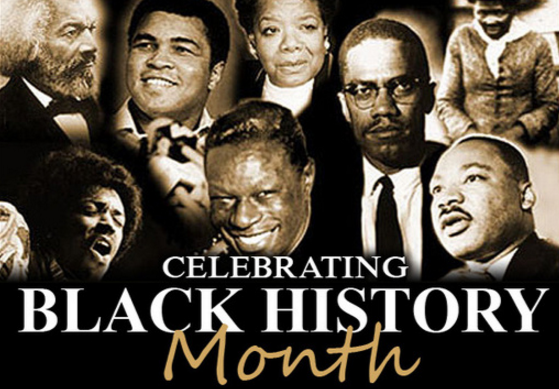 George Wallace at the School Door

African Americans faced strong, often violent, opposition to equal rights. At the University of Alabama, the state’s Governor, George Wallace stood at the door to protest desegregation. Listen to hear more about his contentious views and his lasting impact on politics.

In 1960, four black teenagers demanded service at an all-white lunch counter. Listen to remember one of those protesters and reflection on his life and impact.

Listen to hear the research of conflicts and resistance movements over time and the effectiveness of fighting back without violence. Have students use this analysis to better understand the two sides of the Civil Rights Movement – Martin Luther King Jr’s message of nonviolent resistance and Malcolm X’s Black Power philosophy.

Listen to the parallels between the race struggles of Martin Luther King half a century ago and the Black Lives Matter movement of today.

A Pivotal Moment in the Civil Rights Movement

This audio story describes the attempt by nine black students to integrate Central High School in 1957 after the U.S. Supreme Court decision in Brown v. Board of Education that racial segregation in public schools was unconstitutional.

The 1965 voting rights march in Selma, Alabama exposed police brutality to the world and set the stage for the passage of the Voting Rights Act. The movie ‘Selma’ tells the story of Dr. Martin Luther King, Jr. and the movement in Selma in a new and authentic way. Listen to learn more about traditional Hollywood depictions of civil rights and how this movie has broken that mold. WARNING: THIS AUDIO STORY CONTAINS STRONG LANGUAGE

Martin Luther King: I Have A Dream

Martin Luther King’s famous “I Have a Dream” speech was delivered at the March on Washington on August 28, 1963. In this public radio story you will hear from activists who were present that day and heard the speech.

Nearly six decades after schools were ordered to desegregate, students at a Little Rock High School still believe today there is work to be done to feel fully integrated. Listen to this story to learn how Arkansas high school students feel about race at their school.

Fifty years ago, protest at the Edmund Pettus Bridge in Selma, Alabama exposed the nation to the racial injustice and led to the Voting Rights Act of 1965, forcing all municipalities to allow black residents to register to vote. Listen to learn more about this historic event in the Civil Rights Movement from people who participated in Bloody Sunday.

Listenwise
Listenwise is an award-winning listening skills platform. We harness the power of listening to advance literacy and learning in all students. Our collection of podcasts and public radio keeps teaching connected to the real world and builds student listening skills at the same time. We believe in...