Life Choices: Learning from Anne Frank and My English Teacher 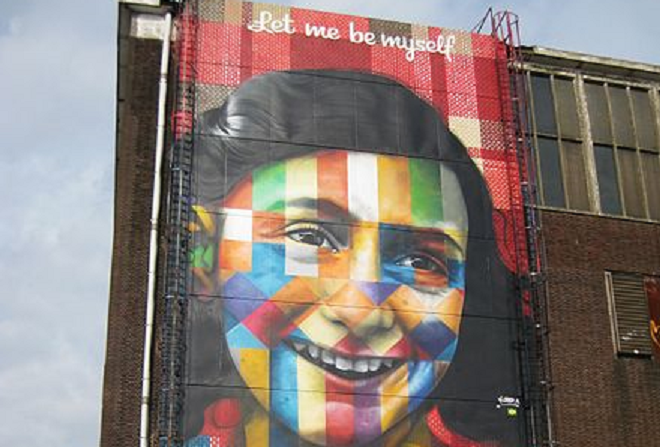 Turning sixty-five can be a time to think back on one’s career while also considering whether it might not be time to retire and get to that mountain of books that have been gathering on the nightstand and spend more time with the grandchildren. For me, receiving my Medicare card has also been a time to reflect on the choices and important people and who have shaped my journey as an educator and as a person. There are many, of course, but two are at the heart of my story. One, Anne Frank, I met only through her Diary; the other Ms. Riley, was the English teacher who introduced me to Anne’s Diary, and who was instrumental in my becoming an educator.

Ms. Riley introduced me and my 7th grade classmates to The Diary of a Young Girl in 1964, the year that was to become known as “the year that changed America.” I remember vividly the race riots in major US cities; three Civil Rights workers being murdered in Mississippi; President Johnson declaring a “war on poverty”; the Civil Rights Act of 1964 being signed into law; the US contemplating entering a war that a year later one of my brothers would be drafted to fight in; and the murder of Kitty Genovese prompting inquiries into what became known as the “bystander effect.”  All of this was taking place to the soundtrack from a new group out of England—The Beatles. In her Diary, Anne writes, “I live in a crazy time.” Looking back, I guess I could say I did too. It was with this backdrop that I read the Diary of a Young Girl and began to think about many of the questions that would follow me into adulthood.

I can’t say that I remember reading Anne’s Diary and thinking very deeply (if at all) about her being Jewish or that the terrible events that caused her to go into hiding were the result of a systematic assault against Jews. I didn’t know anything about Jews, or Judaism, or antisemitism. The Diary certainly wasn’t presented in the historical context of Nazi ideology, the Holocaust, or WWII. It was taught as a diary written by a young girl who was facing a very difficult situation and chronicling her thoughts and feelings.  This is not a criticism of Ms. Riley’s teaching; in fact, as Professor Jessica Landfried writes, “When the Diary was published in 1952, there seemed to be a response that universalized Anne into a non-Jewish person that could represent all victims of racism. However, in the 1990s Anne reemerged as a Jewish victim and became the symbol of the Holocaust” (Landfried, 2002).

I remember the classroom discussions about Anne Frank and her Diary even though they were over fifty years ago. Ms. Riley, a young teacher, sitting on the edge of her desk, encouraged us to think about difficult topics like fear, and loneliness, and fairness. Perhaps it was the times in which we were having these discussion that has made them all the more memorable; perhaps it was just the fact that middle school students are often trying to make sense of the world in which they live and have a strong, if not idealistic, sense of fairness in human relationships. The most memorable discussions were the ones that focused on those who helped the Franks and the others in hiding. Ms. Riley asked us to think about what makes a person help another even at great risk. On January 28, 1944, Anne writes, “The best example of this is our own helpers, who have managed to pull us through so far and will hopefully bring us safely to shore, because otherwise they'll find themselves sharing the fate of those they're trying to protect. Never have they uttered a single word about the burden we must be, never have they complained that we're too much trouble. ..That's something we should never forget: while others display their heroism in battle or against the Germans, our helpers prove theirs every day by their good spirits and affection.”

These discussions had a great impact on me in two ways. One, I wanted to be just like Ms. Riley and teach great pieces of literature and have students discuss complex themes and grapple with questions like the ones Anne’s Diary posed. My journey to becoming an educator began in 1964. The second is more complicated. At the end of reading The Diary of Anne Frank, Ms. Riley challenged us to ask ourselves if we would have helped Anne Frank. A sound pedagogy for teaching about the Holocaust does not ask students to imagine what they might have done, as no one can ever truly answer such a question from the comfort of the present, but this was 1964, and there was no “pedagogy for teaching about the Holocaust.” There was just a young, idealistic teacher asking soon-to-be teenagers to think about the kind of people they wanted to be. I carried that question with me throughout my life. At various stages I thought I knew the answer but then something in my life would change and I would have to admit to myself that I was back to not knowing. The most memorable was when I had my own children and realized that my answer was “No, I would not help Anne Frank if it meant putting my daughters at risk.” And then my daughters became adults and I thought, “Yes, I would help Anne Frank.” And, round and round for over 50 years I struggled with the question Ms. Riley had posed to us.

Not long ago, I came across a quote that is attributed to Anne Frank, and even though I am unable to verify she was the author, I like to believe she was. The following quote helped me understand what Ms. Riley had been asking us:

I believe the question she asked was not meant to be literal, but symbolic; it was an opportunity to begin to explore what it means to be a good person, a fair person, a person who takes risks, and a person who refuses to be a bystander. She was also impressing upon us that the choices we make as young people begin to guide our lives, as one good (or bad) choice leads to another and another until they have simply become who we are.

My choice to become an educator resulted in working with thousands of students and hopefully helping them love literature, to think deeply about what they were reading and the human relationships that literature helps readers explore. Working with students led me to other choices in the education field including working closely with teachers and developing curricula, including Echoes and Reflections.  My choice to keep the story of the Holocaust relevant for generations to come and to keep Anne Frank’s story alive was a choice that was borne out of a deep respect for a young girl who, in one of her last diary entries before being arrested by the Nazis, wrote, “I still believe, in spite of everything, that people are truly good at heart.” At every juncture of my personal and professional journey, I have made choices and over time those choices have made me.

As for teaching about the Holocaust, I have been in big cities and small towns in every region of the country. In some places teaching the history is mandated and in other places teachers are taking a risk to teach this content—some of their students are hearing that the Holocaust never happened from social media or even in their own homes. These teachers have made a choice and over time that choice has made them.

Your students live in their own “crazy time,” and are trying to make sense of their world. Let’s do all that we can to help them make brave and caring choices—choices that will eventually make them brave and caring people.

Join the conversation! We invite you to share about a teacher or book that had an impact on your life, or specifically, share what Anne Frank has meant to you.

This article was originally published on June 12, 2017, on the Echoes & Reflections website and can be found here.

Deborah A. Batiste was one of the lead authors of Echoes & Reflections and now serves as ADL's Echoes & Reflections Project Director, responsible for the day-to-day operations of the program, including working closely with USC Shoah Foundation, Yad Vashem, ADL regional offices, and consultants to the project; conducting national training programs; presenting at regional and national conferences; developing support materials; and for much of the recordkeeping and reporting associated with the project. Since the launch of the program in 2005, Deborah has conducted professional development programs to effectively use Echoes & Reflections in the classroom in 40 states and the District of Columbia, reaching thousands of educators and community leaders.

Except for a short period when she was with Annenberg/CPB, Deborah has been with ADL since 1991. Prior to 1991, she taught high school English and supervised student teachers in Prince George’s County, Maryland. She holds a BS in Secondary Education and a Master’s degree in Psychology.