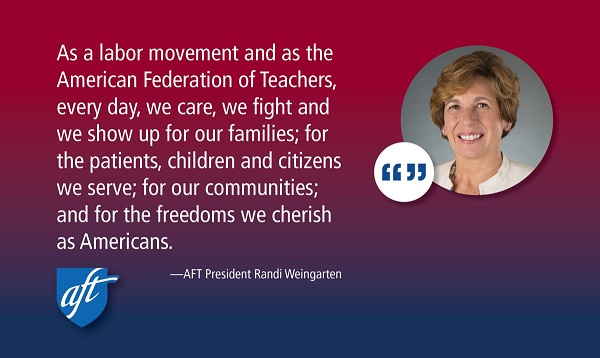 A growing and enduring middle class, great public schools, a living wage, affordable healthcare and college, a decent retirement, a voice at work and in our democracy, communities that are safe and welcoming — these are American aspirations, and they are what the American labor movement has fought for, for generations. We have fought to ensure these aspirations are attainable for everyone, no matter your ZIP code, race, religion, ethnicity, sex or gender identity.

That’s who we are as a labor movement and as the American Federation of Teachers. And what further binds AFT members together, whether you started working just this week or 30 years ago, is that we make a difference in the lives of others. Every day, we care, we fight and we show up for our families; for the patients, children and citizens we serve; for our communities; and for the freedoms we cherish as Americans.

This is the 10th year I’ve penned a Labor Day message. It allows me to honor the work of the 1.7 million educators, nurses and health professionals, and public service workers who constitute our union. But this Labor Day can’t just be a day to honor working people, or to march or picnic or go shopping or take those last deep breaths of summer.

Everything we’ve fought for and have attained is on the line right now — labor rights, civil rights, voting rights, educational opportunities and our democracy itself. Just as it fell to our founders who forged our unions long ago, it falls to our generations, millennials and baby boomers alike, to be the ones who stop the march toward a new Gilded Age and ensure everyone who calls America home has the freedom to secure a better life.

That’s what the labor movement does: We fight for voice and freedom at work and at the ballot box, just as striking teachers did this past winter and spring. Unions are the best vehicle for working people to secure a better life. Together, we make possible what would be impossible for individuals acting alone. We are the best hope for a fair and decent America.

The other side — Betsy DeVos, the Koch brothers — they know this. That’s why they’ve spent so much of their time and money trying to take unions out. They call it freedom, but, in reality, they want people to fend for themselves. Alone. They like the current system of winners and losers, and will use their money and power in our economic and political system to keep their power. What they didn’t expect is that working people would see through their facade and overwhelmingly rejected right-wing efforts to divide us and destroy unions.

Despite the Janus case and other court cases (there are now more than 40) designed to strip workers of their freedoms, despite the glossy mailings trying to convince people to drop their union, despite the TV ads and press campaigns to smear unions, the vast majority of educators, nurses, firefighters and other public workers have told DeVos, the Kochs and the other billionaires funding these campaigns: We’re sticking with our union.

This is truly a “which side are you on?” moment.

Today — as corporate profits skyrocket and the wealthy find new ways to use their power to enrich themselves and strip workers of their economic and political freedoms — working people are working longer and harder than ever. While pockets exist where unions still have real power, wages have stagnated over the past four decades yet the cost of everything from healthcare and college to adequate housing and groceries has skyrocketed. Working families have suffered, and the ways we enable opportunity in the United States have been weakened. In 25 states, for example, public K-12 education has been stripped of $19 billion over the last decade. In state after state, right-wing politicians have decimated investments in education, healthcare and communities in favor of tax cuts for corporations. The top 25 hedge fund managers make more than all the nation’s kindergarten teachers combined.

And while President Trump campaigned as a populist and pledged that the “American worker will finally have a president who will protect them and fight for them,” he has governed for the rich at the expense of working people. Look at his tax cut for corporations and the wealthy. Companies aren’t using their tax windfall to raise workers’ wages or create more well-paying jobs; they’re rewarding investors and executives though billions in stock buybacks and other maneuvers. Trump cheered the Janus decision moments after it was issued, and his administration has tried to destroy federal workers’ rights and their unions. He just canceled the wage increases that Congress approved for federal workers. His education secretary, Betsy DeVos, continues her effort to defund and dismantle public education while doing everything in her power to prioritize for-profits and student loan companies over students. Imagine an education secretary starting this school year not by finding money for books and supplies for our students, but by proposing that the money that goes for guidance counselors and mental health services for poor kids instead go for arming teachers. And this administration continues to sow division and hatred among Americans.

All of this makes the November elections a moment of urgency and opportunity — a moment to reject the politics of division; an opportunity to level the playing field, to create economic policies that help all, not just the wealthy. It’s our opportunity to turn the tide nationally by electing a new Congress and by putting a real focus on the states. There are 36 states with governor’s races this year, and more than 90 percent of our members live in these states. We have a good shot at making real change by electing new pro-worker, pro-public education and pro-labor governors in states like Florida, Illinois, Kansas, Michigan, New Mexico, Ohio and Wisconsin, and by holding on to governor’s offices in places like California, Colorado, Connecticut, Maryland, Minnesota, New York, Oregon and Pennsylvania.

These states can serve as a check on the dangerous and reckless policies of this administration. And they’re where we’ll be able to move an agenda of investment in public education instead of austerity and privatization, to strengthen unions, to make healthcare and college more affordable, and to rebuild the middle class.

It’s the union movement, our movement, that can and must be the catalyst for change, for fairness and for justice in this moment. We need to be all-in, together. And as teachers in Oklahoma chanted during their walkout, we must “remember in November.”

Thank you for all that you do to care, fight, show up and, now, vote.