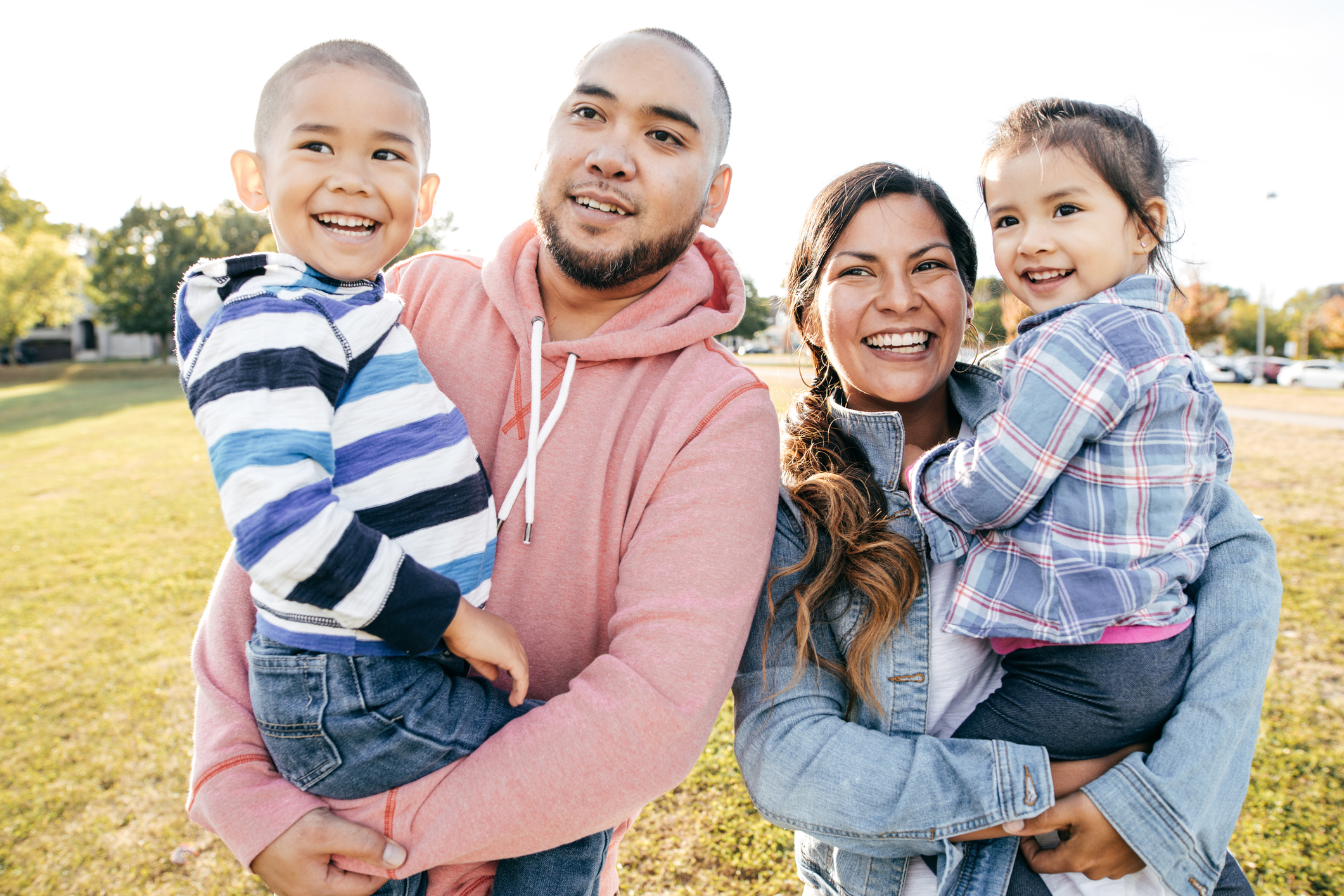 In April, millions of Americans began receiving Economic Impact Payments—stimulus checks—as part of the bipartisan Coronavirus Aid, Relief and Economic Security Act that provides direct financial relief to taxpayers in light of the coronavirus health crisis. By the second week of May, more than 130 million stimulus checks were delivered to American workers. Unfortunately, most immigrant families—especially undocumented individuals—will not receive a check. The C.A.R.E.S. Act excludes millions of tax-paying immigrant workers who don’t have legal status. It also blocks U.S. citizens who file a joint return with a spouse who does not have a Social Security number and excludes some six million U.S.-born children in families with mixed immigration status. A number of civil rights groups—including the Mexican American Legal Defense and Educational Fund and the Institute for Constitutional Advocacy and Protection are challenging the denial of federal relief to mixed-status married couples and children.

“When the news came out that the stimulus checks would not include undocumented families, we realized we needed to do something,” says Susan Solomon, president of United Educators of San Francisco. “We know that a lot of these families were already struggling to make it in this expensive city. We also know that they are disproportionately affected by COVID, since many of them are essential workers.”

Through an online pledge campaign, UESF members are helping to fill the financial gap for some of the city’s immigrant families.

“We saw this lack of inclusion as a failure of our government, so we decided to step in and help our own,” says Solomon, who believes immigrant families are an integral part of the local school community. “Most immigrant and undocumented families send their children to public schools. These are the people who provide childcare and work in essential jobs in our communities.” 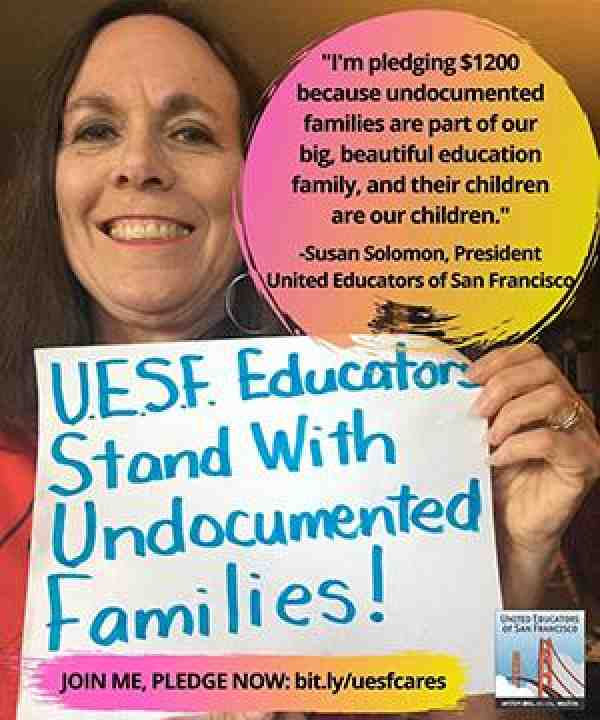 Even before the current crisis, Solomon says, a lot of families in the city faced financial challenges. “We know that, some of our own teachers are struggling in this crisis. It made us wonder what it must be like for undocumented and immigrant families, especially those who are low-wage earners or those who might not be able to work right now.”

In addition to being a union leader and member, Frank Lara—the fifth-grade bilingual teacher who created UESF’s pledge campaign—is a community activist who has worked for years with immigrants’ rights groups. The union launched its pledge campaign and set up a fund in mid-March, Lara says, with a resolution passed by the UESF executive board, which donated $1,000. Two weeks after the union established the fund, some 200 UESF members had pledged $50,000. Now, more than 450 members have pledged $130,000, he says.

Working collaboratively with city officials and several community groups, Lara says the union’s pledges will go to UndocuFundSF—a nonprofit organization that was formed in March in response to the COVID-19 pandemic. The platform is modeled after the UndocuFund Sonoma County which provided financial aid to families affected by wildfires in 2017. UndocuFundSF provides direct assistance to undocumented workers and families affected by the health crisis and resulting shelter-in-place orders. Lara says UndocuFundSF has raised $780,000, and some 600 families have applied for assistance. 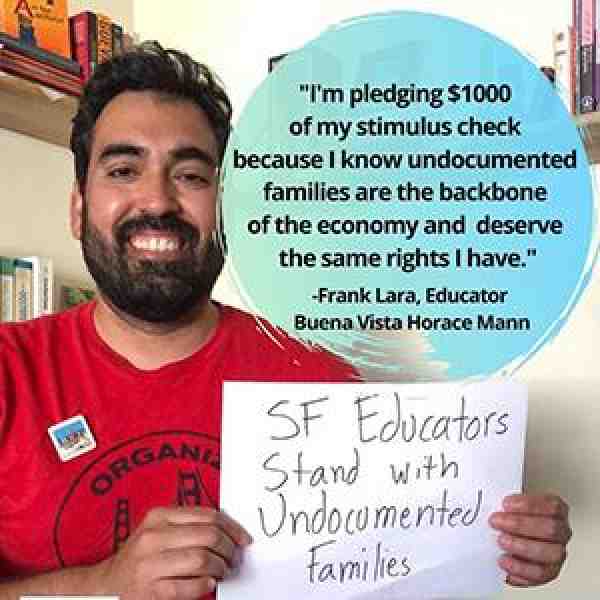 “A lot of the issues with undocumented workers is that the only thing they have is their labor, and without that labor, they don’t have wages,” says Lara, who is pledging $1,000 of his expected stimulus check. “Our union has fought very hard to maintain our wages during this crisis, but millions of workers don’t have that.

“For us [union members], the stimulus money is extra,” he says. “Of course, many of us could use that money, but we wanted to share it and stand in solidarity with the marginalized members of our community.”

“Close to one-third of our students are undocumented, so this is a big concern to us,” says Juan Ramirez, a UTLA vice president and elementary school bilingual teacher. “We know that our undocumented students and parents are suffering the most.”In Los Angeles, members of United Teachers Los Angeles are standing with members of the local immigrant community through #ShareMyCheck, a union initiative to support the Immigrant Workers Safety Net Fund established by the National Day Laborers Organizing Network. UTLA is encouraging members to share their stimulus checks with undocumented workers and families on the union’s website, which says undocumented workers paid more than $30 billion in state and federal taxes.

During the 2019 Los Angeles teachers’ strike that resulted in major gains for the city’s students, schools and educators, Ramirez says the union built critical relationships with the community—including immigrant parents and families. 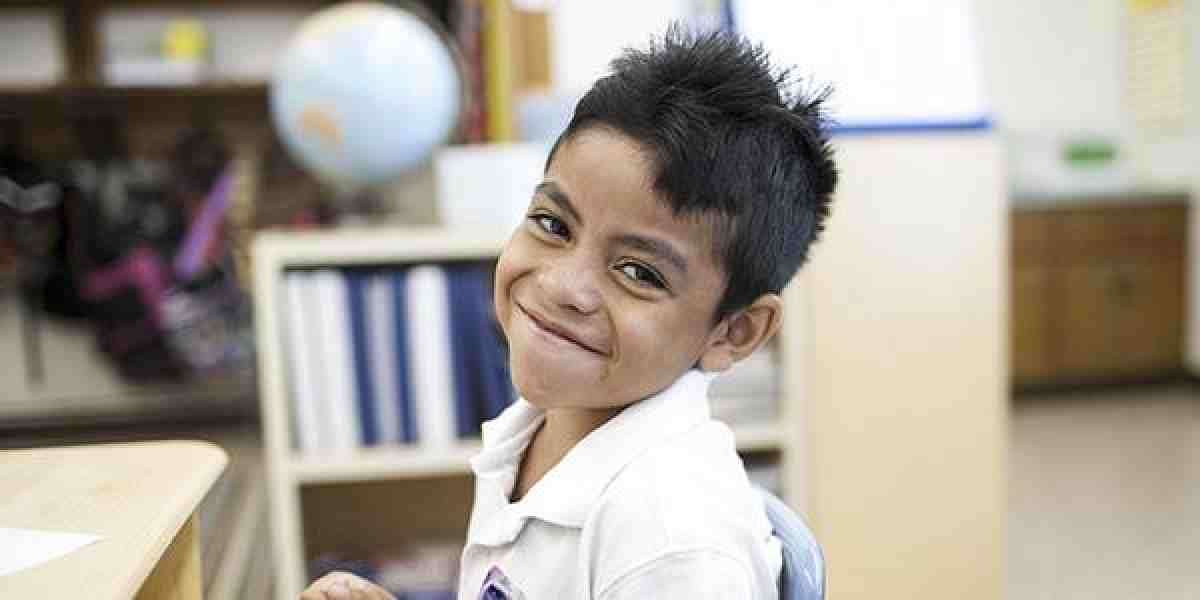 “When we were starting to bargain with the district, we thought the one thing we had to do was to work with our community,” Ramirez says. “During the strike, we had a lot of support from the community, which was the direct result of the outreach work we had done with parents,” through the Reclaim Our Schools LA coalition.

“When this crisis happened, we started to see that a lot of the parents in our community aren’t able to work, since a lot of the jobs that immigrant and undocumented workers can get are in restaurants and hotels,” he says. “As a union, we are continuing to build on the relationships we established during the strike by standing up and asking our local government to help protect immigrants and to extend healthcare and unemployment insurance to these workers.

“We need to speak up for the people who can’t speak for themselves,” Ramirez says.

On May 12, Democratic members of the U.S. House of Representatives filed the Health and Economic Recovery Omnibus Emergency Solutions Act, known as the Heroes Act. The bill provides a $3 trillion coronavirus relief package that includes a new one-time payment of $1,200 per adult and child that would be extended to tax filers with Individual Tax Identification Numbers. The ITIN is a tax processing number created by the IRS in 1996 so that foreign nationals and other individuals who are ineligible for a Social Security number can pay the taxes they are legally required to pay. The Heroes Act also would modify the C.A.R.E.S. Act to ensure that ITIN filers receive funds from the initial stimulus. The bill makes an effort to close the gap in relief for immigrant communities, but it faces opposition.

You Are Welcome Here: Supporting the Social and Emotional Needs of Newcomer Students 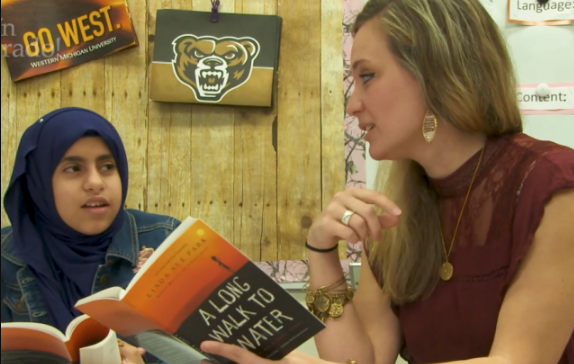 Protecting Immigrant Families: What States and Cities Are Doing

Though most immigrant and undocumented workers aren’t eligible for the current federal stimulus assistance, some states and cities are creating special funds to help these workers and their families.

In California, Gov. Gavin Newsom established a disaster relief fund with an investment of $75 million from the state and $50 million in private funding organized through Grantmakers Concerned with Immigrants and Refugees. The program provides a one-time cash payment of $500 per adult, with a cap of $1,000 per household. The Oregon Worker Relief Fund is seeking to replace up to 60 percent of lost wages for Oregonians who, due to their or a family member’s immigration status, are disqualified from receiving unemployment insurance or stimulus benefits.

At the local level, a $5 million emergency response fund in Minneapolis provides relief for city residents, regardless of immigration status through a number of supports. It includes a program that provides emergency rental assistance and utility payments, and forgivable loans for small businesses, including self-employed people, to cover payroll and other expenses. In Boston, a $3 million fund was established to assist city residents, regardless of their immigration status, who are at risk of losing rental housing due to COVID-19. And the local government in Austin, Texas, passed a resolution that allocates $15 million to a city emergency fund that will distribute money to residents who are ineligible for federal assistance.

Members of the Providence Teachers Union in Rhode Island are donating funds from their stimulus checks to a Stimulus Redistribution Campaign, a solidarity effort by the Alliance to Mobilize Our Resistance. AMOR, which is an organization providing a wide range of assistance around the state, is accepting and distributing donations to undocumented workers.

“Everyone is in crisis mode around the city, and we have a pretty significant population of undocumented students and families,” says Maribeth K. Calabro, PTU president. “A few weeks ago, one of our members, Jennifer Walker, reached out and said she would rather do something helpful with her stimulus check instead of spending it on something ridiculous. I thought it was a great idea.”

“When I realized that, as a single parent, head-of-household tax filer, I would be receiving a stimulus check for $1,700, even though my income hasn’t been interrupted, while other people either aren’t receiving anything or just not enough, I felt like maybe that maybe those resources were misdirected,” says Walker, a literacy coach at a Providence elementary school. “I just wanted to redistribute some of those funds to where it would be more useful.”

Walker says she was sure other teachers and school employees would feel the same; and she was right.

Members were quick to respond. Calabro says, “Even before we could get a fund set up, we had members contacting us wanting to give to undocumented students and families.” The funds also are available to other families who need assistance, Walker says.

“As educators, we’re always thinking about what our kids and their families need,” says UESF President Solomon. “We felt that linking our efforts to the stimulus checks makes a powerful, symbolic statement about the unfairness of the government failing to care for these families.”

Share your story about how your local has been helping & protecting immigrant families.