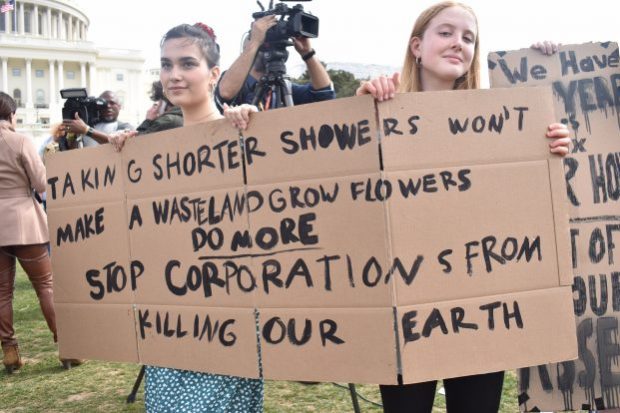 Student Actvism for Climate Change Driving Action Across the Globe

On Friday, March 15th, hundreds of high schoolers protested for climate change in front of the Capitol building in Washington, D.C., joining a global effort of young people from more than 100 countries.

“The rest of the world is suffering, but because it has not been happening on our own land, we have chosen to stay quiet,” said Alyssa Weissman, a speaker at the climate strike driven by student activism. “It is time for us to stop watching.”

The goal of protests like the climate strike is to raise awareness and increase civic activism among youth. Organizers are also hoping to persuade young people to vote. Although 18 to 29-year-olds did vote in greater numbers in the 2018 midterm elections, it still remained on the low side at 31 percent. Overall voter turnout in the U.S. trails behind other developed countries, according to a study from Pew Research.

The U.S. ranks #2 in the world in countries with the largest amounts of carbon dioxide emissions from oil, natural gas coal and other fuels; China is number one. According to a report by the United Nations, the next five years will increase pollution, fossil fuel use and inefficient energy consumption levels so significantly that “it will become impossible to hold global warming to safe levels.”

“This whole movement is not about power or money,” explained Warren. “When the wind starts blowing and the water starts rising…it will not be about SnapChat or Instagram or your car. It will be about climate change impacting your life.”

Student Activism and Aspirations for a Better World

While many teens believe in calling Congresspeople and local leaders to voice their concern for climate change, others are skeptical of the government’s ability to take action to reduce the impact of global warming.

“The government can’t solve everything,” said Hunter Langley, a sophomore at T.C. Williams in Virginia, who did not attend the protest. “When people are left to decide things on their own, they generally do a much better job than the government.”

“Our politicians and our leaders are not doing their jobs,” said Adria Ivkovic, a senior at Walter Johnson High School in Bethesda, Maryland, who attended the climate protest.

Warren says striking and advocating for government action builds accountability as young people challenge politicians’ inaction with a vote out of office.

“When we protest, we gain equality for all,” said Warren.