Student Voice: How Campaigning Gives Me A Sense of A Community 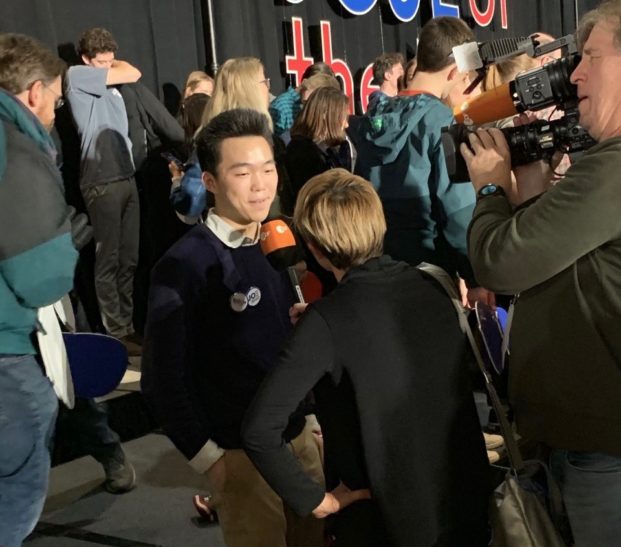 Victor Shi attending a rally in Iowa ahead of the state’s caucuses. Photo: Victor Shi

Four years ago, right before the 2016 Iowa caucus, I sat in Ms. Nudelman’s eighth grade social studies class where she gave a lesson about the democratic process. Listening to Ms. Nudelman discuss American politics inspired me to want to immerse myself in the political arena. I ended up interning for political campaigns and advocating for the issues that matter to me.

Now, four years later, as a senior at Adlai E. Stevenson High School in Illinois and a fellow for one of the presidential campaigns, I had the possibility to experience the 2020 Iowa caucus in person. I knew that what happens in Iowa could make or break the various presidential bids. Traveling to Iowa for the weekend to make one final sprint in an already demanding marathon thrilled me.

Student Voice: Canvassing for the Candidates

My weekend began by waking up at 7:00 in the morning on Saturday, February 1st, to catch the candidate’s ride-in from Chicago to Iowa. Driving past cornfields and witnessing the Iowa foliage, we arrived at our first destination in Davenport, Iowa, three hours later.

With a group of four other volunteers, we discussed simple but essential canvassing strategies to ensure that Iowans caucus for our candidate: stand confidently, be personable, and have fun (we were even surprised by a visit from Texas Congressman Filemon Vela Jr.). Having each of those strategies in mind for the rest of the afternoon, I ventured onto the Davenport streets to knock on my 95 assigned doors. For each of my doors, I maintained steady eye contact, held faith in the democratic process, believed in the value of each individual voice and carried my passion for politics with me.

"Traveling to Iowa for the weekend to make one final sprint in an already demanding marathon thrilled me.”

Although not everyone opened their door, I finished my canvassing packet knowing that I helped make a difference, no matter how small. After a restful night’s sleep, I woke up Sunday morning to continue fighting for an America that values hard work and kindness towards one another. I made my way on the second part of the trip from Davenport to Des Moines to knock on more doors (while also weaving in Super Bowl Sunday references throughout my pitch). The more doors I knocked on, the more people I met from an array of races, political ideologies and backgrounds. Despite our potential differences, I refused to stop believing in the importance of civil discourse.

Completing my Sunday assignments, which included meeting Joe Biden in Des Moines for a campaign event (check-off one selfie with the candidate!), it became clear to me that being part of a campaign is really an opportunity to be part of a community bigger than myself. I made my way back to the hotel to charge up for the day everyone had been long awaiting for: the Iowa caucus.

As soon as my alarm rang, I woke up, grabbed breakfast and like Saturday and Sunday, I knocked on more doors. This time, though, my spirit was at its peak; with high hopes, I tried to convince as many last-minute Iowa caucus-goers as possible to stand with Joe.

It became clear to me that being part of a campaign is really an opportunity to be part of a community bigger than myself.”

Soon after finishing my campaign assignments, I met up with my peers and teachers from school as Stevenson also made their way to experience the Iowa caucus for a club-sponsored trip. We situated ourselves in Urbandale High School, one of the Iowa precincts, where we witnessed the process of Iowa caucus-goers sitting with their candidate, realigning themselves after the first round and the final announcement of how the delegates were split among the candidates.

However, little did my peers or I know that our first Iowa caucus experience would be unprecedented on all fronts. For the next hours, there were still no results from the Iowa Democratic party—highlighting the more problematic aspects of a caucus.

While the Iowa caucuses might not exist four years from now or at least not be the first state to kickoff the primaries anymore, never did that feeling of exhilaration that I helped to effect positive change leave me.

There will be primaries and caucuses taking place in the weeks and months to come. Like Iowa, I can’t predict what will transpire in each state, but what I do know is that I will continue to make phone calls, attend community events and make my voice heard (even through excruciatingly cold midwest winters) to take part in our democracy.

PBS NewsHour Extra
PBS NewsHour Extra helps teachers and students identify the who, what, where and why-it-matters of the major national and international news stories. The site combines the best of NewsHour's reliable, trustworthy news program with lesson plans developed specifically for students. Standards-...