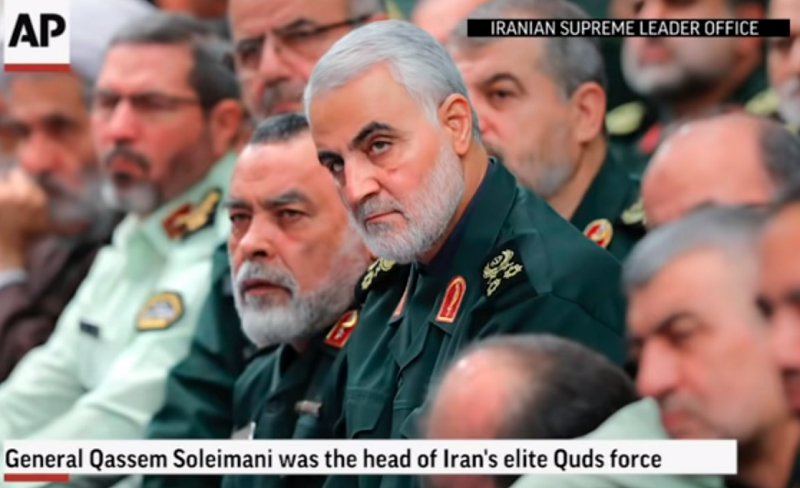 Qassem Soleimani: What's Next for A Region in Turmoil?

Earlier last week, supporters of the Iran-backed militia Kataib Hezbollah staged a 24-hour sit-in, scaled the U.S. embassy walls in Baghdad, Iraq and broke the reception area’s windows. They demanded the U.S. close the embassy and withdraw its more than 5,000 troops from Iraq.

Protestors were responding to U.S. airstrikes on Dec. 29th against members of the same militia. The U.S. blames the group for killing an American military contractor and attacking U.S. bases in Iraq 11 times in the last two months.

On Saturday, hundreds of U.S. troops were deployed from Fort Bragg, North Carolina, to Kuwait to serve as reinforcements in the Middle East amid rising tensions following the U.S. killing of a top Iranian general.

Demonstrators in dozens of cities around the U.S. gathered Saturday to protest the Trump administration’s killing of an Iranian general and decision to send thousands of additional soldiers to the Middle East.

On Sunday, Iran said Sunday it would no longer follow any of the limits of the 2015 nuclear deal with other countries after Soleimani’s death. In May 2018, Trump unilaterally withdrew from the agreement. Iran’s announcement meant it will no longer abide by the deal’s key provisions that blocked it from gathering enough material to build a nuclear weapon.

Trump tweeted Saturday that if Iran attacks any American assets in response to Soleimani’s death, the U.S. has 52 targets across the Islamic Republic that “WILL BE HIT VERY FAST AND VERY HARD.” Some are “important to Iran & Iranian culture,” Trump wrote on Twitter.

Iran has vowed swift retaliation. “I am telling Americans, especially Trump, we will take a revenge that will change their daylight into to a nighttime darkness,” said the cleric, Ayatollah Ahmad Khatami.

On Monday, Tehran’s streets were packed with thousands of mourners following the funeral of Soleimani. Mourners pointed out that Soleimani helped defeat ISIS and others shouted “Down with the USA” and “Death to the USA.”

Members of Hezbollah (Iranian-backed armed Islamist group based in Lebanon) and their supporters gathered on Sunday in Beirut, Lebanon, to mourn the death of Suleimani.

If time allows, read the article that best suits your class:

Use this lesson to explain the escalating conflict in the Middle East after the Iran missile attack seen as retaliation for the death of Qassem Soleimani.

Children of Heaven is a contemporary Iranian film about families, compassion, moral responsibilities and issues of limited resources. This film, shot in and around Tehran, follows the lives of two...

On November 15, 2011, Mohammad Javad Ardashir Larijani spoke at Carnegie Council for Ethics in International Affairs on a variety of topics concerning Iranian politics. At the time of the talk, he...

This resource was designed to provide a critical analysis of the graphic Persepolis. This includes a PowerPoint presentation, a handout on graphic novel/comic terms and a reading quiz. Persepolis...

There has been a lot of talk lately about “fake news” because it has been particularly prevalent during the recent 2016 Presidential election campaign. According to a recent Pew Research Center...