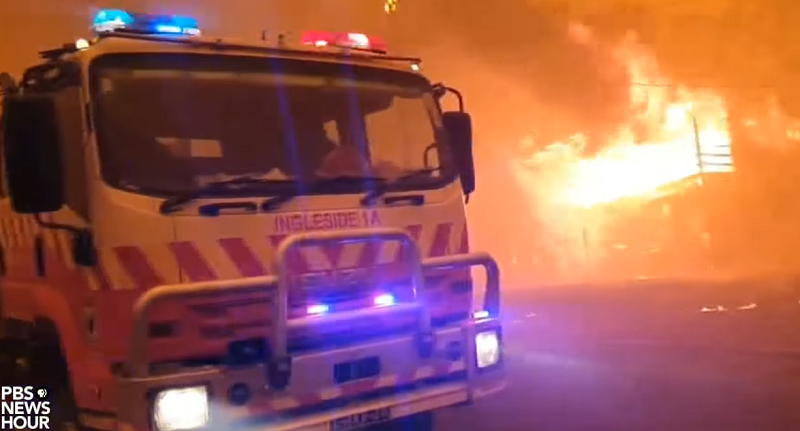 A firetruck arrives at the scene of one of the wildifires.

Vast swaths of Australia are burning with thousands of people under evacuation orders since the fires began in November. A record summer fire season has charred 15 million acres, destroyed 2,000 homes and killed at least 25 people. The states of New South Wales and Victoria are hardest hit, but fires are also burning across the rest of the country in an area twice the size of the U.S. state of Maryland. Watch the video and answer the questions. You can turn on the “CC” (closed-captions) function and read along with the transcript here. To learn “How to help the victims of Australia’s wildfires,” click here. If short on time, read the summary, answer the questions and take a look at these photographs.

A three-year drought preceded the crisis raising concerns about the effects of climate change. In addition, police have arrested and charged 24 people since early November who they say purposely started fires.

Prime Minister Scott Morrison said the government was committing an extra 2 billion Australian dollars ($1.4 billion) toward the recovery effort in addition to the tens of millions of dollars that have already been promised. Morrison has been criticized for not acting swiftly enough to fend off the crisis. Australians in the coastal town of Cobargo blamed Morrison for ignoring them because they are lower-income and therefore have few resources, including firetrucks.

Australian cyclists stop to offer water to thirsty Koalas fleeing the wildfires in this video from DW News.

Related: Over a billion animals perish in Australian Fires

Check out this story via Buzzfeed: If You’re Going To Share A Map Of The Australian Bushfires, Please Make Sure It’s Correct and this one via ABC News: Using US map to examine scale of massive Australia wildfires.

Wildfires can burn thousands of acres, devastate communities, and sometimes even claim lives. Janice Coen at the National Center for Atmospheric Research is studying...

A week of activities about climate change for ages 9 – 11. Ideal for a week in the summer, or you can pick and choose from the resources available, tailoring the work to your particular needs....