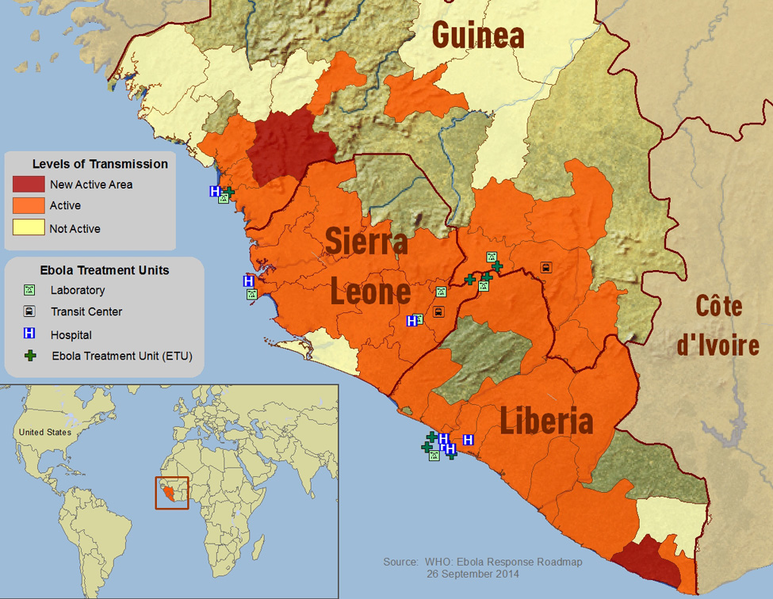 Map illustrating the reach of the Ebola outbreak.

With the recent Ebola outbreak in Western Africa and the confirmed cases of Ebola in the United States, students are bound to have some questions. The following answers have been fact-checked with the information currently being provided to the public from the Center for Disease Control and Prevention (CDC). The “student” questions are in bold and the “teacher” answers are written below.

Last night I heard that someone in Texas got Ebola and is in the hospital. And isn’t it really bad if you get Ebola?
Yes, Ebola is a very serious disease, but you can only get it by having direct contact with someone who is infected or with their body fluids (see question 5). And yes, a person who was in Liberia (where the outbreak is) travelled back to the United States died from the disease. As a result, several nurses have gotten the disease and have recovered. They are now free from Ebola.

Ebola Outbreak: Can the U.S. Handle It?
We have an organization called the Center for Disease Control and Prevention, or the CDC. Their whole job is to be the experts on public health issues, which could mean everything from Ebola to diabetes. They are among the best at what they do in the whole world. You can find more information about Ebola on their website and social media platforms.

The United States is very prepared for responding to an infectious disease like Ebola. The government, health care facilities and others already have in place steps of what to do if an infectious disease got out into the population. This means that everyone who would be involved in helping to keep the virus from spreading and taking care of patients knows the difference steps to take. If you would like to see the plans yourself you can visit the CDC Ebola webpage at http://www.cdc.gov/vhf/ebola/index.html.

The U.S.also has an extremely good health care system, whereas areas of Western Africa have less resources and organization within their health care system. What that means is that our hospitals, other health care facilities like doctor’s offices and public places are well-equipped to provide excellent care to patients. Here are a few examples of how they are able to treat patients who get sick:

But it doesn’t seem like it is going very well in Western Africa where the outbreak started.
Unfortunately, the situation in Western Africa is very dire and people are dying. Where the outbreak has occurred there is a less organized health care system and government infrastructure in place so handling an infectious disease like Ebola can be very challenging. Another factor that complicates trying to stop the spread of Ebola in Western Africa is that traditionally during a funeral, the families and friends of the deceased often touch the body as they say goodbye. This is less of a common practice in the United States.

Ebola Outbreak: Am I Susceptible?
You would have to be in direct contact with someone who is sick with Ebola, meaning they are currently showing symptoms. Direct contactmeans touching someone, touching the bodily fluids of a sick person or being exposed to objects, such as needles, that have been contaminated.
Also, people are not contagious (able to spread the disease to another person) after exposure unless they develop symptoms. So, unless the person was sick at the time when you touched them, they were not able to give it to you.

Ebola Outbreak: What are the Symptoms?
Signs and symptoms of Ebola include:

If someone becomes infected with Ebola, the symptoms may appear anywhere from 2 to 21 days after exposure to the virus, but the average is 8 to 10 days.

Ebola Outbreak: Is There a Cure?
There is not a cure or vaccine yet, but doctors and researchers all over the world are working on it and a few have had good results

Is there anything I should be doing now so I don’t get Ebola? Should I stay home from school or stop hanging out with my friends?
No, you don’t need to change anything that you are doing right now. You can still go to school, travel and hang out with friends and family. Plus, know that if there was a time that you did need to stay home or change your usual schedule, there is already a well-organized plan in place. Also, you definitely would know if the situation changed because you would see it on TV, the Internet and on social media platforms. If you want updates you know you can always trust you can always check the CDC’s website at www.cdc.gov, or follow them on Twitter or Facebook.