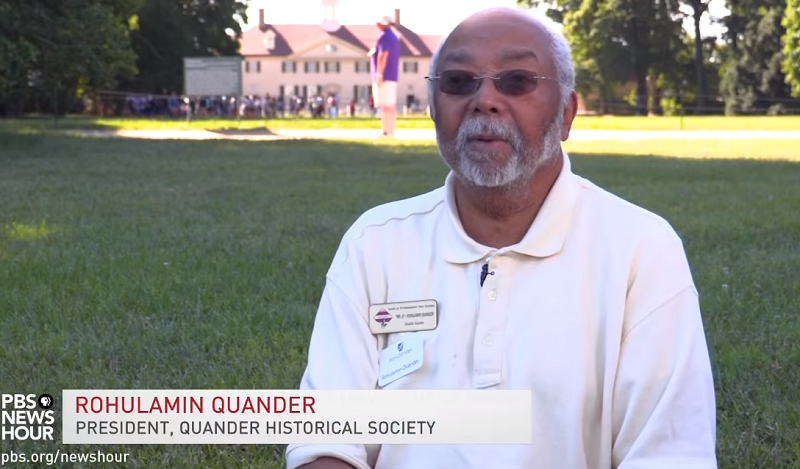 Directions: Read the summary, watch the video and answer the discussion questions. You may want to read along using the transcript here or turn on “CC” closed-captions. The story was filmed, edited and produced by middle and high school students who are part of the NewsHour’s Student Reporting Labs program.

Summary: Presidents Day is observed on George Washington’s birthday, Feb. 18th. A tour guide at Washington’s Mount Vernon estate, who is also a distant relation of an enslaved person at the Virginia estate, offers his perspective about American history, slavery and the founding fathers. Rohulamin Quander is a descendent of the Quander family, one of the oldest, if not the oldest, documented African American families in the country. “We need people in the African American diaspora to understand it; we have always been a part of what constitutes America,” said Quander.

Kenneth C. Davis, author of “In the Shadow of Liberty: The Hidden History of Slavery, Four President and Five Black Lives, refers to slavery as America’s “great contradiction.” “Washington also was a slaveholder, was one of the largest slaveholders at the time. In fact, in 1776, he was already beginning to wrestle with that problem. This contradiction. How do we fight for liberty, yet keep people in chains,” Davis told CBS News. On Monday, he tweeted, “History must balance the scales. On #washingtonsbirthday the job is difficult but critical. ‘How is it that we hear the loudest yelps for liberty among the drivers of Negroes?'” Davis was quoting English writer Samuel Johnson, who was loyal to King George III, and a critic of the protests by American colonists like Washington; Johnson derided the founders defense of slavery.

1) Essential question: How might learning the history of slavery and the lives of enslaved people at Mount Vernon give a more complete picture of American history and George Washington’s life?

4) Media literacy: What do you know about the history of Presidents Day? On Presidents Day, which presidents do you hear about? How many U.S. presidents enslaved people? (10 of the first 15 U.S. presidents owned or grew up in slave-holding households, according to Davis’s “In the Shadow of Liberty.”) Why have more and more historians and members of the public started to use the term “enslaved person” instead of “slave”?

Explore these free lesson plans, educational resources and classroom materials on the accomplishments of U.S. presidents, first ladies and the role and responsibilities of the president in...

This four class period lesson on the first presidency is intended for elementary or perhaps middle school students for the purpose of teaching them about George...