House Impeachment: After the Vote, What Happens in the Senate? 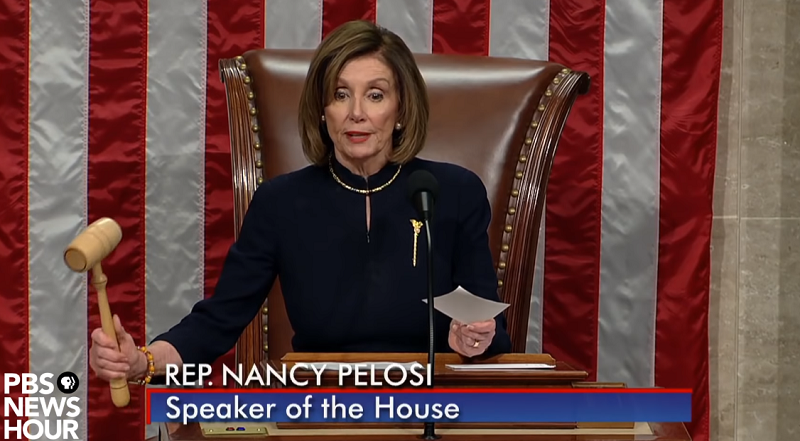 Speaker Pelosi presides overs the House during the vote.

President Donald Trump became the third president in U.S. history Wednesday to be impeached by the House of Representatives under the Constitution for high crimes and misdemeanors. The vote split along party lines over the charges of abuse of power that involved Trump enlisting a foreign government to investigate a political opponent ahead of the 2020 election. The House also voted to impeach on a charge that the president then obstructed Congress in its investigation. The articles of impeachment head now to the Senate for trial. Trump is expected to be acquitted by the Republican-led chamber, however, rules for the trial including if any new witnesses will be allowed to testify are underway. Watch the video and answer the questions. You can turn on the “CC” (closed-captions) function and read along with the transcript here. Watch the very start of the video when the first article of impeachment vote is announced, and then go to 26m:00s to watch Speaker Nancy Pelosi announce the article's adoption.

You can read the full articles of impeachment against Trump here.

[Background: House Speaker Nancy Pelosi, D-Calif., announced an inquiry in September following a whistleblower complaint about a phone call between Trump and the new president of Ukraine. The House voted on conducting a formal inquiry on Oct. 28. Specifically, Trump asked for an investigation into the 2016 election, and into the son of potential  2020 political opponent, former Vice President Joe Biden. The Trump administration is accused of withholding military aid to Ukraine for Trump’s personal political advantage. Trump says he has done nothing wrong.]

Wednesday’s House proceedings represent only the third time in U.S. history that the body has debated impeaching a president. What has changed in the decades since previous impeachment processes — and what hasn’t? Yale University professor Beverly Gage joins John Yang to discuss the role of the modern media, varying reliance on the courts and whether impeachment has become a partisan tool.

What legislative steps are required for the impeachment of a President? Understand this idea and more with Share My Lesson's free impeachment lesson plans.