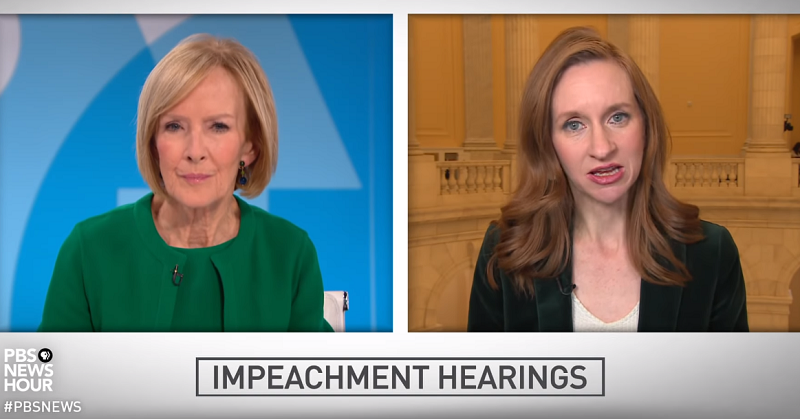 Summary: In the final day of public impeachment hearings on November 21, Dr. Fiona Hill, the former National Security Council senior director for Europe and Russia, and David Holmes, the political affairs counselor at the U.S. embassy in Ukraine, testified in front of a House committee. Gordon Sondland, U.S. ambassador to the European Union, testified to the committee that there was a quid pro quo with Ukraine and that he followed President Donald Trump’s orders to work with Rudy Giuliani. Sondland also implicated Secretary of State Mike Pompeo and Vice President Mike Pence in a pressure campaign. Watch a few minutes of Sondland’s testimony here in which he is questioned by committee chair Rep. Adam Schiff, D-Calif., and a few minutes by Rep. Jim Jordan, R-Ohio. Watch the video and answer the questions. You can turn on the “CC” (closed-captions) function and read along with the transcript here. For the sake of time, stop the video at 8m:54s.

Some background: House Speaker Nancy Pelosi, D-Calif., announced an inquiry in September following a whistleblower complaint about a phone call between the White House and Ukraine. The House voted on conducting a formal inquiry on Oct. 28. Specifically, the phone call occurred between Ukrainian President Volodymyr Zelenskiy and Trump who asked for an investigation into a conspiracy theory related to the 2016 election, and into potential  2020 political opponent former Vice President Joe Biden. The Trump administration is accused of withholding military aid to Ukraine for Trump’s personal political advantage. Trump says he has done nothing wrong.

Catch up on current events with NewsHour Extra:

Day 3 of the impeachment hearings: Role of witnesses

Day 1 of impeachment hearings: Short activity for your students

This article was originally published by PBS NewHour Extra and can be found here.

What legislative steps are required for the impeachment of a President? Understand this idea and more with Share My Lesson's free impeachment lesson plans.

PBS NewsHour Extra analyzes day three of impeachment hearings and examines the role of witnesses during the impeachment process.