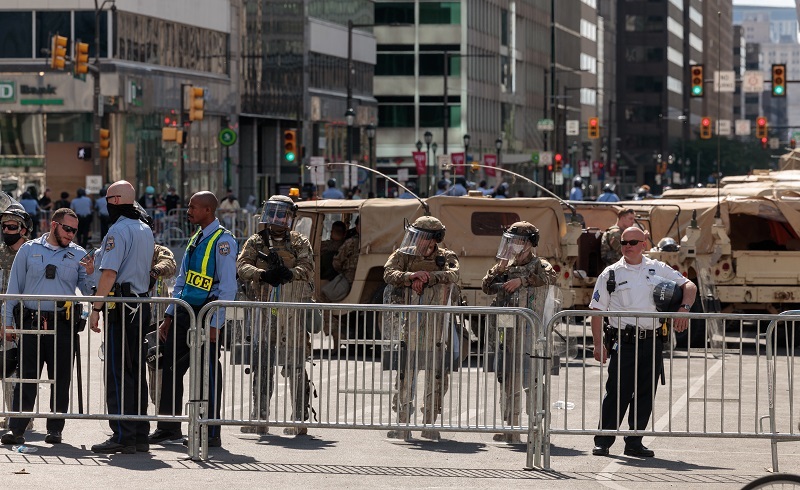 Trigger warning: The video has been edited for length and to remove disturbing footage. To watch the full video or read the transcript, click here. If short on time, read this AP News summary of protests through May 31, and discuss the response by government and law enforcement officials.

Read the news summary, watch the video and answer the discussion questions.

Twenty-three states have mobilized the National Guard in response to ongoing protests in cities across the country. Though many protests have been peaceful, some protesters, along with other groups and individuals taking advantage of the protests, have vandalized, burned, looted and destroyed businesses. Violent confrontations between police and protesters have also been documented in dozens of cities. The first state to mobilize the National Guard was Minnesota, which continues to see demonstrations despite the presence of the Guard and imposition of curfews.

1. Trump’s response: President Donald Trump has tweeted about the protests, but has not yet addressed the nation.

Watch this video or read the transcript of this interview and then ask your students: During moments of destructive civil unrest, what power do national leaders have to reduce tension or otherwise bring about peace? What words, if any, might be helpful in a moment such as this?

2. If there is time, watch “What the 1960s can teach us about modern-day protests“(video): Have students watch this interview with Princeton history professor Omar Wasow on the ways protest (whether peaceful or violent) can change the political landscape. Ask your students: How do these protests compare to some of the civil rights protests of the 1960s? Do you think these protests will lead to some of the same sorts of change? Why or why not?

Engage with this free news lesson on the death of George Floyd and examine critical issues of police brutality and structural racism in America.