Shields and Brooks on the Politicization of American Institutions 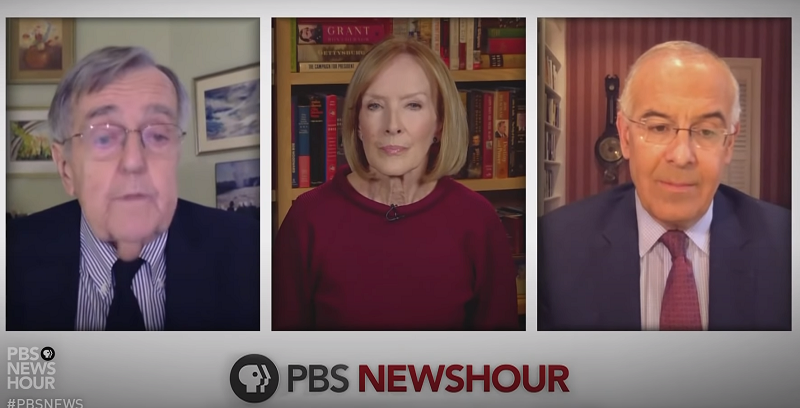 Shields and Brooks on the Latest Political News

In the Friday NewsHour segment “Shields and Brooks”, syndicated columnist Mark Shields and New York Times columnist David Brooks discuss the latest political news, including the Department of Justice’s request to throw out the case against Michael Flynn, the president’s former national security adviser. Flynn had pleaded guilty to lying about his contacts with Russian diplomats. President Donald Trump has praised the decision to throw out the case and said the FBI is full of people acting in bad faith. Watch the video below and answer the discussion questions. Follow along with the transcript here.

Shields and Brooks also discussed the politicization of American government institutions and how President Trump’s reelection ambition is driving his response to the COVID-19 pandemic. “Someday, we will get to the point where opening up seems to me a smart strategy. But I personally don’t see the evidence of that, looking at the data,” said Brooks, adding, “…Trump seems to be wildly premature in doing this. And, frankly, the American people seem to me a little premature. Over the last week, even as the health data continues to be terrible, people are loosening. The travel is up. Gathering is up.” More than 79,000 Americans have died of COVID-19 with more than 1.3 million confirmed cases of infection.

“Politicization is the last refuge of the scoundrel. To ‘politicize’ something — hurricanes, intelligence, science, football, gun violence — is to render it political in a way that distorts its true meaning. That, at least, seems to be the reasoning of those who use the term as an insult: We adhere to pristine, unadulterated facts and call for unity; they politicize those facts for partisan gain and divide us even more.”

3. How does the Michael Flynn case reflect growing politicization?

4. Why does David Brooks wish more of his fellow citizens would “try to hang in there a little longer” when it comes to loosening quarantine restrictions and getting back to normal?

5. How significant a role will the coronavirus pandemic play in the 2020 presidential election?

5. Media literacy: The “Shields and Brooks” segment has been running on NewsHour for many years. David Brooks takes a more conservative view while Mark Shields provides a more liberal view. How did their political perspectives play out during this conversation? Some people do not like ideological labels, such as liberalism or conservatism. How do you feel about using political labels such as these?