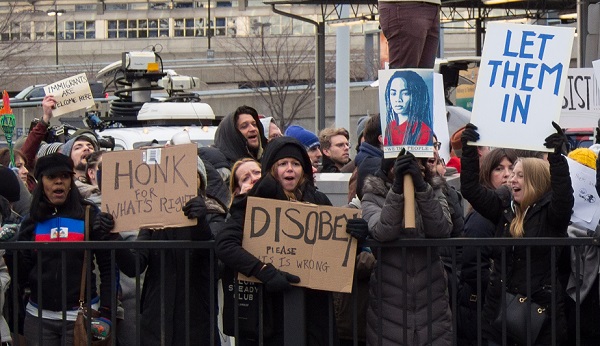 By the Anti-Defamation League

On January 27, President Trump signed an executive order called “Protecting the Nation from Foreign Terrorist Entry into the United States” which is intended to screen out “radical Islamic terrorists.” The Executive Order includes the following:  (1) suspend admission of all refugees for 120 days while a new system is put in place to tighten vetting, (2) ban the entry of foreign nationals for 90 days from seven majority Muslim countries: Syria, Iran, Sudan, Libya, Somalia, Yemen and Iran and (3) halt the flow of refugees from Syria until further notice.  At first, the order was interpreted to mean that even lawful permanent residents (also known as green card holders) who were from those seven countries could not enter the United States. A few days after signing the executive order, the White House adjusted the ban somewhat, saying that the temporary ban on visitors did not apply to those with green cards.

The next day on the morning after the executive order was issued, immigration agents detained two Iraqis at JFK Airport in New York City. Two New York Congress people, Nydia Velazquez and Jerrold Nadler, went to the airport and, with attorneys, tried to assist the Iraqi detainees. Word spread throughout social media about their plight and people came to JFK Airport to protest the executive order and bring attention to the ban. The Department of Homeland Security reported that there were 109 people denied entry into the United States, and 173 people who had been abroad and were trying to get back to the United States were not allowed to board their flights. Protestors gathered at airports across the country to demand the detainees’ release and the rescinding of the ban, including: Chicago, Seattle, Newark, Fairfax, Denver, Chicago, Dallas, Portland, OR, Los Angeles, San Francisco, San Diego and others.  Demonstrations continued on Sunday at airports and other locations around the country, including Washington, D.C.

Hundreds of attorneys showed up at U.S. airports all over the country to offer free legal help to the travelers and family members of loved ones detained under President Trump’s executive order. The American Civil Liberties Union (ACLU), along with other organizations, immediately challenged Trump’s executive order in court as violating the Due Process and Equal Protection Clauses of the U.S. Constitution. They got a hearing at a Federal Court in Brooklyn, NY on January 28 and the judge issued a stay, which blocked President Trump’s policy from taking effect and preventing refugees and immigrants from being deported.  In addition, a handful of other federal judges have temporarily blocked parts of the order.

On January 29, Trump issued a statement claiming that the executive order is not a ‘Muslim ban.’ The statement read: "To be clear, this is not a Muslim ban, as the media is falsely reporting. This is not about religion - this is about terror and keeping our country safe.” However, on FOX News over the weekend of the executive order, Rudy Giuliani, an early Trump supporter and current White House cyber security adviser, said that President Trump talked with him about wanting a “Muslim ban” and requested he assemble a commission to show him “the right way to do it legally.” The order explicitly says that they will prioritize people who are part of the country’s minority religion and who are facing persecution as a result of their religion.

For the full lesson, including a printable version of the text above, please visit this page.

The Anti-Defamation League (ADL) was founded in 1913 "to stop the defamation of the Jewish people and to secure justice and fair treatment to all." As a leading provider of anti-bias education, the ADL's A WORLD OF DIFFERENCE® Institute provides customizable, interactive training programs and curriculum materials that incorporate the latest research from the education field. We offer a variety of training programs for pre-K through 12th grade school communities - educators, administrators, youth and families - which focus on the development of an inclusive culture and respectful school climate by addressing issues of bias and bullying. Our programs and resources help students (1) recognize bias and the harm it inflicts on individuals and society, (2) build understanding of the value and benefits of diversity, (3) improve intergroup relations and (4) confront racism, anti-Semitism and all other forms of bigotry. www.adl.org/education-outreach/

On January 27, 2017, President Trump signed an executive order called “Protecting the Nation from Foreign Terrorist Entry into the United States,” which he says is to screen out “radical Islamic...

ADL is a leading anti-hate organization. Founded in 1913 in response to an escalating climate of anti-Semitism and...

Essential question: What does it mean to be a refugee?