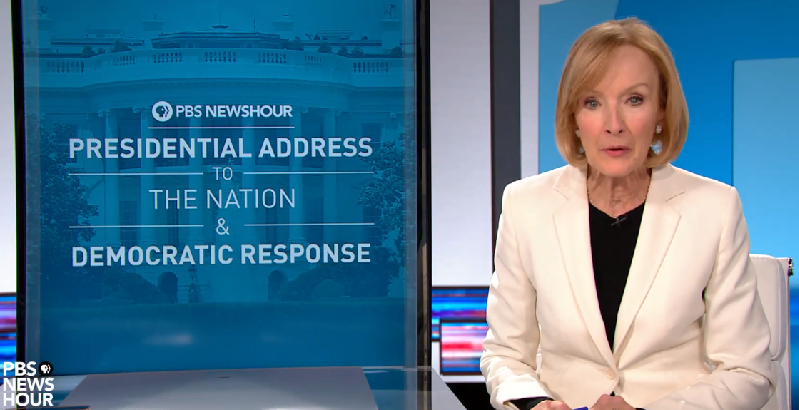 Directions: Read the summary, watch the video and then answer the discussion questions.

Summary: On Tuesday night, President Donald Trump delivered a prime-time address from the Oval Office on the government shutdown and what he called the “humanitarian and national security crisis” at the border. Trump said that all Americans are hurt by uncontrolled illegal migration, adding that it “strains public resources and drives down jobs and wages.” Trump is demanding a taxpayer-funded $5 billion in border wall — an issue at the heart of a partial government shutdown that is now into its third week. Democratic lawmakers have been unwilling to pass budgets that include a border barrier. With both sides still at a stalemate, the partial government shutdown, at 18 days and counting, is already one of the longest shutdowns in modern history.

Dig deeper: When he was running for president, Trump campaigned on Mexico paying for the wall. Republican legislators previously proposing $25 billion for construction. To learn more, read NewsHour’s “How Trump is trying to shift the shutdown debate” here, and this piece, “Trump says there’s a ‘crisis’ at the border. Here’s what the data says,” here.

1) Essential question: Why did President Trump decide to give a prime-time speech on the government shutdown and the border wall?

2) How effective was President Trump’s primetime speech? Explain your response.

4) Media literacy: Check out the main news story on Trump’s speech as covered by each of the following news outlets:

Fox: Trump, in first-ever prime time Oval Office address, laments ‘crisis of the heart and a crisis of the soul’ at border

a. What do you notice about the headlines? Now click on the stories: Whose voices are featured in the news stories? Who do we not hear from? What other news stories appear next to Trump’s speech story? What might the topics of these stories say about the amount of attention the news outlets wanted to give Trump’s speech?

b. Find two more news stories from two other news outlets. What do you notice about these stories? Do they feature quotes from Trump’s speech or reactions to his speech?

c. How could different types of guests affect what people take away from the President’s speech? Do any news outlets feature ‘regular, everyday voters’? Why do you think this is the case?

1. Senator Chuck Schumer and House Speaker Nancy Pelosi appeared together to respond to the primetime immigration address from President Donald Trump. “We can re-open the government and continue to work through disagreements about policy” was their main message.

Discussion questions: How effective was the Democratic response?

Do you agree with Schumer and Pelosi that the government should reopen? Explain.

2. Read these additional NewsHour articles to help you further understand the effects of the government shutdown:

How this shutdown compares to every other since 1976

5 reasons why this shutdown is worse for federal workers

The many ways the shutdown is stopping vital services and research

Essential question:  What role does the federal government play in your life?

Available on demand for free

What are some qualities of citizenship essential for sustaining democracy in troubled times? I can’t think of a better question to ask at this moment in history. It challenges us to consider how...

The U.S. National Parks system began in the late 19th century. Over time, the rationale for National Parks has expanded from simply maintaining scenery for tourists to restoring original...