What Should Be Done About Deferred Action on Childhood Arrivals (DACA)? 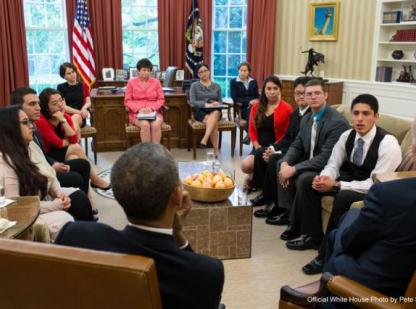 Note to Teacher: It is important to reflect on and consider that you may have students in your classroom who are immigrants, undocumented immigrants, and/or have family members who are undocumented immigrants or DACA recipients. Be prepared and sensitive to those students, taking into consideration the extent to which they are a minority or majority of your classroom and plan accordingly. Further, it is possible that if the students have not shared this previously, they may disclose it during the course of the lesson. That information should only come from the student directly and young people do not always feel comfortable sharing this information with other people. If you have students in your class who fit into either of these categories and actually want to discuss their situations, talk with them in advance and determine the best way for them to discuss this topic while feeling comfortable and safe.

Do you know what DACA (Deferred Action on Childhood Arrivals) is? Can you guess based on the words? Do you know who “DREAMers” are and why they are called that?

On September 5, 2017, President Trump ordered an end to the Deferred Action on Childhood Arrivals (DACA) program. This program shields some young undocumented immigrants —who often arrived at a very young age in circumstances beyond their control—from deportation. The President also urged Congress to pass a replacement before the administration begins phasing out DACA’s protections in six months. This means that as early as March 2018, some of the 800,000 young adults brought to the U.S. as children who qualify for the program, will become eligible for deportation and lose access to education and work visas.

• The DREAM Act was a bill introduced in Congress before 2010 that was meant to address the needs of undocumented young people who grew up in the United States and came to this country from other countries as children—often in circumstances beyond their control. These young people have grown up as Americans, identify themselves as Americans, and many speak only English and have no memory of or connection with the country where they were born. Under current immigration law, most of these young people had no way to gain legal residency even though they have lived in the U.S. most of their lives, many graduating from high school. The DREAM Act would have provided a pathway to U.S. citizenship to certain undocumented youth who go to college and/or join the armed services as well as remained in good standing with the law. There have been a few versions of the DREAM Act introduced in Congress (the first one in 2001) but none have passed.

• Many DREAMers say they didn’t know they were unauthorized immigrants until they were teenagers—often when they discovered they couldn’t join their peers in getting a driver’s license or filling out financial aid forms for college because they didn’t have Social Security numbers.
• Because the DREAM Act didn’t pass in Congress, in 2012 President Obama issued an executive order, “Deferred Action for Childhood Arrivals,” also known as DACA. It enables certain people who came to the U.S. as children and meet several key guidelines to request consideration for deferred action. The directive instructs the Department of Homeland Security (DHS) to allow non-U.S. citizens who qualify to remain in the country for two years, subject to renewal. Recipients are eligible for work authorization and other benefits, and are shielded from deportation.
• Since the Obama Administration began DACA in 2012, 787,580 people have been approved for the program, according to the latest government figures. To be eligible, applicants had to have arrived in the U.S. before age 16 and lived here since June 15, 2007. They could not have been older than 30 when the Department of Homeland Security enacted the policy in 2012. DACA applicants have to provide evidence they were living in the U.S. at the prescribed times, proof of education and confirmation of their identities. They also had to pass background, fingerprint and other biometric checks that record identifying biological features. The fee to request DACA is $495. Among the accepted applicants, Mexico is by far the biggest country of origin, followed by El Salvador, Guatemala and Honduras.
• DACA has been instrumental in improving DREAMers’ lives in a variety of ways. A 2017 national study revealed that 91% of DACA respondents are currently employed. Their average hourly wage was $17.46 an hour, up from $10.29 before receiving DACA. Forty-five percent of respondents are currently in school and among those currently in school, 72% are pursuing a bachelor’s degree or higher. Nearly 80% of respondents said they obtained driver's licenses, which is also a public safety improvement for all people.
• Voters overwhelmingly support allowing undocumented immigrants brought to the U.S. as children to stay in the country, according to a new Politico/Morning Consult poll. Fifty-eight percent of voters think DREAMers should be allowed to stay and become citizens if they meet certain requirements. Another 18% think they should be allowed to stay and become legal residents, not citizens. Only 15% think they should be removed or deported. Support for allowing them to remain the U.S. spans across party lines: 84% of Democrats, 74% of Independents and 69% of Republicans think they should stay.
• On September 5, 2017, Attorney General Jeff Sessions announced that the Trump Administration was ending the Deferred Action on Childhood Arrivals (DACA) program. He asserted that “the executive branch, through DACA, deliberately sought to achieve what the legislative branch specifically refused to authorize on multiple occasions. Such an open-ended circumvention of immigration laws was an unconstitutional exercise of authority by the Executive Branch.” He urged Congress to pass a replacement before the administration begins phasing out its protections in six months.

Compelling Question: Should DACA be saved?

The content of this TNTL has been used with permission from the ADL. You can access the full lesson and all accompanying resources here.

On September 5, 2017, President Trump ordered an end to the Deferred Action on Childhood Arrivals (DACA) program. This program shields some young undocumented immigrants —who often arrived at a...