Women's Soccer: How the U.S. Winning the World Cup is the Perfect Civics Lesson 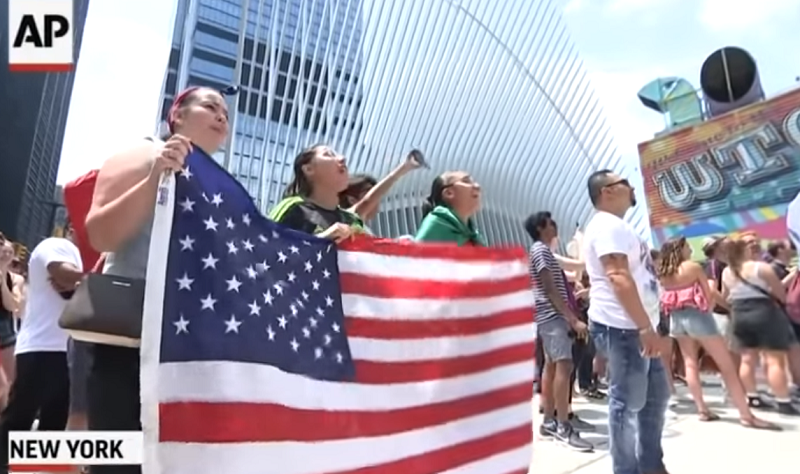 The U.S. women’s soccer team won its fourth FIFA World Cup on Sunday against the Netherlands in a 2-0 victory in Lyon, France. Megan Rapinoe scored in a penalty kick and Rose Lavelle added a goal. Rapinoe took home the Golden Ball award as top player in women's soccer and the Golden Boot as top scorer in women's soccer. “It’s surreal. I don’t know how to feel like now,” Rapinoe said, adding, “We’re crazy and that’s what makes us so special. We just have no quit in us. We’re so tight, and we’ll do anything to win.”

After the win, thousands of fans in the Lyon stadium began chanting “equal pay, equal pay” in reaction to the issue of just how much less the U.S. women’s soccer team makes compared to the men’s, despite the former dominating the game. In response to the equal pay debate, Rapinoe said “‘we’re done with’ asking whether female athletes are ‘worth it.’” Rapinoe has stood up publicly for gender equity and LGBTQ rights as well as on the issue of policy brutality and racism. She took a knee back in the fall, in solidarity with football player Colin Kaepernick. President Donald Trump took to Twitter in response to Rapinoe’s explicit statement that she would not go to the White House nor would the team likely be invited, if they won the World Cup. However, after Sunday’s victory, Trump congratulated the team on their win. A ticker-tape parade is planned in New York City for the team on Wednesday.

Watch the video below, read the Associated Press article, “U.S. wins 4th World Cup title, 2nd in a row, beats Dutch 2-0,” and answer the discussion questions below about the U.S. women's soccer team and their victory.

1) Essential question: What do you think the U.S. Women's Soccer Team World Cup win means to women and girls in the U.S. and across the world? You may want to watch this short AP video for reactions.

2) Why were the crowds in France chanting “equal pay” after the U.S. women’s soccer team won in the World Cup finals?

[Equal pay definition: According to the EEOC’s website, “The Equal Pay Act requires that men and women be given equal pay for equal work in the same establishment.”]

3) In March, every member of the U.S. Women’s National Team as well as former players sued the U.S. Soccer Federation, arguing for equal pay and work conditions as the U.S. men’s team. In 2015, the pay structure was so skewed that the men’s national team earned $9 million for losing in round 16, while the women earned only $2 million for wining the entire tournament.

*Do you think U.S. women's soccer players should be allowed to see a breakdown of how much money they make?

*Why do you think the players decided to sue the soccer federation a few months before the World Cup?

4) Take a look at the photos below. What expressions do you see on the players’ faces? What about the crowd’s faces?

*Can you think of an example in your life that made you smile and feel proud?

*In addition to sheer joy that having a big win brings, why is the World Cup connected to a feeling of patriotism? Check out the U.S. Women's Soccer team celebrating their victory below:

5. For decades, athletes have used their position to take a stand and raise awareness on issues they care deeply about. This past fall, Rapinoe took a knee in a show of solidarity with football player Colin Kaepernick who first took a knee a few years ago to raise awareness around racism and police brutality of black people. U.S. Soccer disapproved of Rapinoe’s decision, stating that representing one’s country is a privilege and that players are expected to stand and honor the flag. In response, Rapinoe said, “I truly feel like I’m representing my country in doing this, and representing everybody that lives in this country, not just the people that look like me or the people that I know [and] people that I have experiences with.”

Ask your students: Why do you think Rapinoe chose to take a knee even if the issue of police brutality may not likely affect her directly? What role might empathy play here? Do you agree with Rapinoe’s decision? Explain.

Optional: Use this NewsHour Extra lesson, “Free speech and Trump’s reaction to NFL protesters,” to explore the issue more. What would you do if you were in Kaepernick’s position? Would you give up millions in the NFL to take a stand on an issue if you thought your position may bring about change?

6. Olympic athletes Tommie Smith and John Carlos protested the state of poverty of black people in America when they took off their shoes and raised their fists in support of the Civil Rights Movement during the 1968 Olympics. They were suspended and sent home, and their careers were over. Watch the video “1968 Summer Olympics, Black Power Salute” in which both men explain why they took the stand they did that day on the podium.

Media literacy: What viewpoint does the narrator hold in the video? What do you think are some opposing viewpoints in response to Smith and Carlos’ decision?

*What repercussions did both athletes experience afterwards?

*Do you think that the Olympic world stage was the right place to stand up for civil rights? Explain your response.

*What are some other examples of athletes taking a stand on an issue in hopes of helping others?

1. Dig deeper: Next, watch The Young Turks video below about Australian Olympian Peter Norman’s role on the podium alongside Smith and Carlos in 1968. How did Norman demonstrate empathy towards Smith and Carlos? What repercussions did Norman experience as a result of his show of solidarity with Smith and Carlos? Why do you think Norman’s story is little known? What would you do if you were in Norman’s position? Would you have taken the pardon? Why or why not?

Take a look at the photo below. Why do you think Smith and Carlos acted as the pallbearers at Norman’s funeral in 2006? In 2012, the Australian government issued an apology for Norman’s treatment. What are some other examples from history in which an individual or a group of people received an apology from a governing body years after an injustice took place? Do you know of any injustices past or present in which the ruling body did not issue an apology? How could you find out, if you’re not sure?

2. Dig deeper: “It took a lot of courage for him to befriend me in front of Hitler.” — Jesse Owens, U.S. Olympic gold medalist

Directions: Read the story of the friendship between Owens and Germany’s Luz Long during the 1936 Olympics in Berlin here by Montgomery College students in Maryland. Owens ended up winning the gold medal and Long the silver after a unique exchange took place between both men.

In Owens’ words: “You can melt down all the medals and cups I have and they wouldn’t be a plating on the 24-karat friendship I felt for Luz Long at that moment. Hitler must have gone crazy watching us embrace.” He went on to share, “The sad part of the story is I never saw Long again. He was killed in World War II.” In Long’s last letter to Owens, Long said, “Someday find my son … tell him about how things can be between men on this Earth.” Ask your students: What is an example from history or in your own community of people from different backgrounds getting along and making a difference in the world ?

Could there really be a “gender gap” between what boys and girls earn for allowance? A recent survey showed that in U.S. families, boys are paid twice as much allowance as girls for doing weekly...

In this women in the workforce activity, students will examine graphs on education, earnings, and workforce participation for men and women between 1940 and 2010....