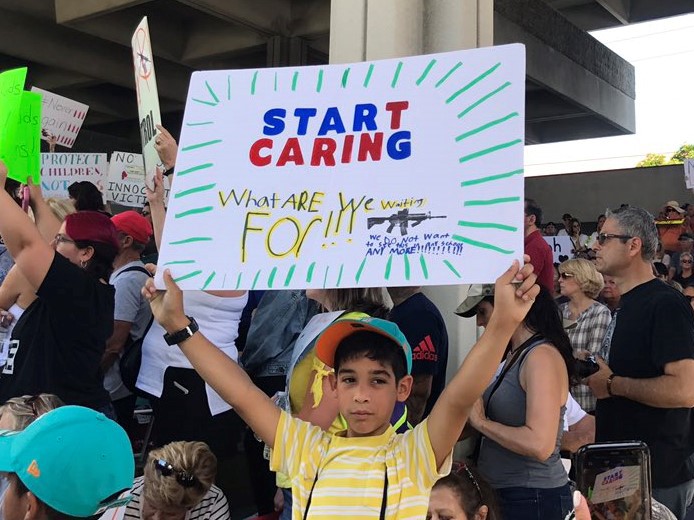 Children need to be valued more than guns

I met with educators and school staff from Stoneman Douglas High School and so many other schools — union members from Broward Teachers Union who spent hours at our afternoon meeting. They are feeling and expressing every emotion possible right now.

Let’s take a moment to appreciate the Stoneman Douglas staff, who on 2/14 performed acts of selfless heroism to protect their kids from bullets, hiding them in closets and keeping them calm.

I met with educators who lost their colleagues and the students they loved.

I heard from students who sheltered in closets, who lost their friends, who wrote texts to their families thinking they had one last opportunity to say they loved them, and who are now speaking out and demanding action. As Emma Gonzalez said, “We are going to be the kids you read about in textbooks. Not because we’re going to be another statistic about mass shooting in America, but because, just as David said, we are going to be the last mass shooting.”

Children need to be valued more than guns. We’ve had 238 gun shootings in schools since Newtown. When is enough, enough?

I laid flowers at the memorial for the 17 lives lost. And I cried.

I’m a religious person. I believe in thoughts and prayers. But now it is time for action.

Children need to be valued more than guns. We’ve had 238 gun shootings in schools since Newtown. When is enough, enough?

That’s why we’re joining with students, teachers, parents and communities on April 20, the anniversary of the Columbine shooting, for a national day of action against gun violence in our schools. Sign up right now to join us.

Our immediate focus as a union in the hours and days following 2/14 is to make sure that our students and our members feel safe and supported.

Our Broward local, under the remarkable leadership of Anna Fusco, has been an anchor for everyone. Unfortunately, our union has become all too familiar with how to handle the aftermath of these massacres and what those dealing with this kind of trauma need to support themselves and their students. All Broward’s national and state affiliates — the Florida Education Association, the National Education Association and the AFT — are all in, as are our locals. I was joined in Broward by our Newtown (Conn.) Federation of Teachers president, Tom Kuroski, to offer support and guidance on how his local and the Newtown community responded following the 2012 shootings at Sandy Hook Elementary. That support will continue.

And while we’ll continue to advocate for additional mental health supports, counselors and social workers in our schools, these massacres won’t stop until we do something about guns. Just like in Las Vegas, San Bernardino and Newtown, the shooter at Stoneman Douglas used an AR-15 — a weapon capable of shooting hundreds of rounds in minutes. Children, teachers and school staff should not have to prepare themselves against an attack with this type of weapon. And parents should never have to wonder if their child won’t come home because they were gunned down in their school by a military weapon.

While we’ll continue to advocate for additional mental health supports, counselors and social workers in our schools, these massacres won’t stop until we do something about guns.

If Australia could figure out how to stop gun violence after a mass shooting there in 1996, the United States can figure it out too. These kinds of tragedies don’t have to be our new normal.

The teachers and staff at Stoneman Douglas High School were heroes when they acted on their instincts to protect the children in their classrooms. A former student at the school shared that “there wasn’t a teacher at Stoneman Douglas who wouldn’t take a bullet for their kids.” I don’t doubt that for one minute, but nobody should be put in that situation.

And as I write, many more actions are being planned, like the one on March 24 in Washington, D.C., led by the students from Stoneman Douglas. As we get more details, we will make them available. We must not let other issues eclipse our determination to change laws to make our schools safer!

We need to make a lot of noise to try to change policy and laws. We worked to make that happen after Columbine, after Sandy Hook, and after Pulse nightclub. If it doesn’t happen now, then we must hold people accountable at the ballot box for their failure to value students, educators and schools over guns.

You can also contribute to the AFT’s fund to support the educators, students and community of Broward County, Fla.