Dolores Huerta— A Fierce Advocate for Workers’ and Women’s Rights 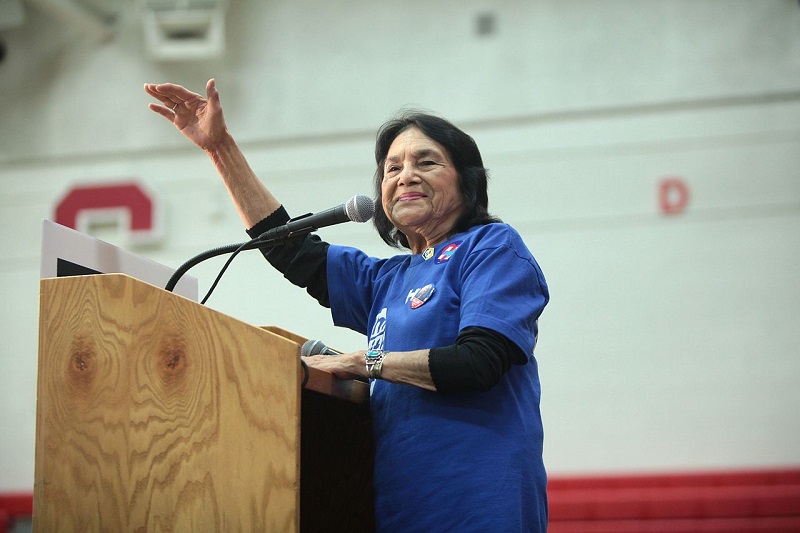 Aug. 18, 2019, marked the 99th anniversary of the ratification of the 19th Amendment, which barred states from denying women the right to vote based solely on their sex. Two days later, Dolores Huerta, a fierce advocate for workers’ and women’s rights, (together with seven others) was arrested in Fresno County, Calif., for doing something she had been doing since the early 1960s.

Dolores Huerta was leading a protest that demanded fair pay for homecare workers, 89 percent of whom are women and people of color; they work in residential institutions, nursing homes, private homes and communities, according to PHI, an organization that works to transform eldercare and disability services. The workers in Fresno are paid the $12 minimum wage and have not received a pay raise  in 10 years.

The median hourly wage for homecare workers nationwide is $10.11 in mainly part-time positions; therefore, a worker barely makes an average of $13,300 annually.

Dolores Clara Fernandez Huerta is often present at protests and demonstrations related to the struggle for workers’ and women’s rights. She has been beaten and arrested dozens of times for her role in union actions. During one California protest, she suffered two broken ribs inflicted by the police during an arrest.

She did not set out to become an activist. Born in Dawson, N.M., to Mexican American parents, she attended school and college and became a teacher, but quit after only a short stint. She said, “I quit teaching because I couldn’t stand seeing kids come to class hungry and needing shoes. I thought I could do more by organizing farm workers than by trying to teach their hungry children.” It was that reality that led her to join with César Chávez to found the National Farm Workers Association, which later became the United Farm Workers.

The farm workers identify closely with their countries of origin. In fact, Hispanic Heritage Month (Sept. 15 – Oct. 15), which began in 1968, recognizes and celebrates the contributions of Hispanics and Latinos. The beginning date (Sept. 15) is significant because it is the independence anniversary of five of their countries of origin: Costa Rica, El Salvador, Guatemala, Honduras and Nicaragua. Mexico, Chile and Belize also celebrate their independence day during this period. And Columbus Day (Día de la Raza) is Oct. 12.

Dolores Huerta and Her Enduring Impact

In July 2016, Huerta addressed the American Federation of Teachers convention in Minneapolis, the year of the AFT’s 100th anniversary, where she urged teachers “to ensure students know that while people come in all different shades and colors, we are all one human race.” At the convention, she also committed to continue to work to improve the lives of working people. “We have to work very, very hard against the forces of evil trying to put profits first and workers second. We cannot allow this.”

Her Fresno arrest at the age of 89 proves that her commitment is as profound and unwavering as when she quit her teaching job to become an activist for the poor and powerless. Huerta—whose home state is home to the largest share (47 percent) of the Hispanic and Latino population in the U.S.--is a national figure and compares to U.S. Rep. John Lewis who, in spite of numerous arrests and beatings, remained undeterred in his commitment to and involvement in the civil rights movement.

When Barack Obama launched his campaign for president, he chose the slogan “Sí Se Puede” (“Yes, We Can”) and credited Huerta for creating the phrase, which became the rallying cry during the long and dangerous struggle to win collective bargaining rights, decent contracts with growers, and health and benefit agreements for farm workers in this country. She was instrumental in getting the Agricultural Labor Relations Act passed in 1975—the first law that gave collective bargaining rights to workers in California.

Dolores Huerta received numerous awards for her role in the struggle to make the lives of workers and their families better. In 2017, her life was featured in an American documentary that won seven awards. Her honors include the Presidential Medal of Freedom in 2012, the highest civilian award in the United States. She continues to work very, very hard to put workers first.