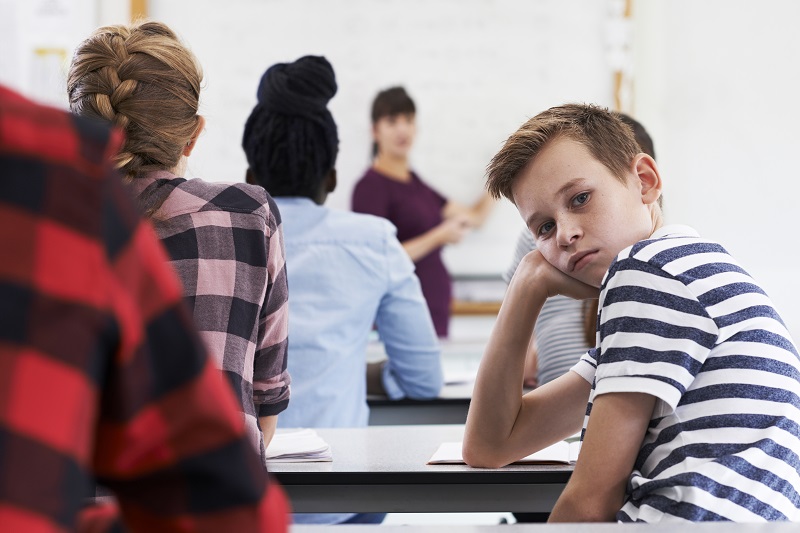 Motivating students, especially those who seem to constantly cause trouble, can be difficult. There are four myths about motivation that, when dispelled, can help us better understand how to motivate students.

Myth One: The Student Just Is Not Motivated

Have you ever said a student “just isn’t motivated”? I know I did when I was teaching—usually when nothing I did worked with a particular student. But this is never true; we are all motivated by something. When you say this, chances are that you really mean your student is not motivated by what you want or expect.

Let me explain using two examples. Philip is the class clown who never misses an opportunity to crack a joke. He doesn’t do his homework, and any time you ask him to respond in class, he turns it into an opportunity to perform a comedy routine. From your perspective, he is just a class clown who draws other students away from learning. You have tried to deal with this in a couple of ways, including referring him to the office for misbehavior. You noticed, however, that the next day at lunch, he was entertaining his classmates with the story of his visit to the office. Finally, out of desperation, you have decided not to call on Philip anymore, as a way to limit his opportunities to act up in class.

Tiffani, however, is quiet and doesn’t volunteer to answer questions. You always make an effort to include her in the class discussion, even though she never gives more than a one-word answer. When you ask her, even privately, if she needs help, her answer is always “No, I’m fine.” Her grades and classroom performance indicate that she has potential to learn, but her lack of response to your offer of help is hindering her from reaching her full potential. Finally, you tell her you are calling her parents in to talk about her work, and she bursts into tears. Despite your reassurances that you are not calling to complain, she can’t stop crying.

In each of these cases, it’s easy to accept the myth the students aren’t motivated; on the surface, they don’t seem to care. But the students are strongly motivated by two powerful emotions: pleasure and pain. Philip craves attention and wants to be popular. His parents are divorced; and at lunch with his friends who laugh at his jokes, he feels good because he temporarily forgets that his parents argue all the time.

Tiffani, on the other hand, is reacting from fear. She has five brothers and sisters at home, and her parents have said that children should be seen and not heard. Her oldest brother dropped out of school, robbed a convenience store and is in prison. Her sister was suspended from school so often that she also decided to drop out of school. Her parents were so angry, they made her live with an aunt and uncle in another state. Tiffani overheard her parents tell her grandmother, “Tiffani is the good one because she is quiet and doesn’t cause problems. At least she doesn’t get into trouble at school.” Tiffani is scared that if her teacher calls home, her parents will think she is just like her older brother and sister.

In each case, the student is motivated—just not by you or your classroom. This happens far too often. To combat the myth of students just not being motivated, learn as much as you can about your students and their interests.

Myth Two: You Can Motivate Someone

This is a double-edged sword. It’s true that you can motivate someone to perform a particular action (think of trained seals), but you aren’t truly motivating that individual for any length of time. If the stakes are high enough, and if you use the right rewards or punishment, even the most resistant person will conform long enough to get the reward or avoid the punishment. But, to motivate the student to continue, you would have to ratchet up the stakes.

I have seen this happen with a popular reading incentive program. Students earn points by passing a test showing they read the book. Then students cash in their points for rewards. This sounds pretty good (I know I like the rewards I can earn with my frequent flyer points), but it can take a negative turn. I’ve been in schools where the prizes are pencils, or bookmarks, or books; but as students get older, they want or need more and better prizes to keep reading. The prizes become electronic games or CDs. I was appalled to read a news story praising an area high school for its innovative reading program. The school wanted to encourage reading, so it purchased the incentive program; and to motivate students, the school gave away a car!

You’ve probably seen the same thing in terms of using punishment as a motivator. Eric constantly misbehaved in my class, and he quickly progressed through all the negative consequences in my behavior plan. Isolating him didn’t work, so I tried lunch detention. When that didn’t work, we used in-school suspension. Of course, the next time, that didn’t work, so we tried out-of-school suspension. By the end of the first nine weeks, I realized I had already used every single negative consequence in my discipline plan along with several others that I tried just in case. I believed I could motivate him (myth two), but because I never found the real reasons for his behavior, I was only able to get short-term results.

Myth Three: You Cannot Motivate Someone

This is the other edge of that sword. As I just discussed, you can motivate actions for the short term, but let’s take a long-term view here. Although you cannot make other people be motivated, you can set up an environment or situation where they are more likely to be motivated.

Kendra Alston, former academic facilitator at Kennedy Middle School, shared a lesson she learned in high school. She wasn’t excited to study the 1920s and 1930s, but her social studies teacher, Mr. Baldwin, told the students was giving a “show me what you know” final exam. “He didn’t care how you showed it, as long as you showed what you know,” she recalls. “Things flashed before my eyes, but I was into theater. So I researched the vaudeville circuit at the time and found Bessie Smith in theater. She was a blues singer who sang in speakeasies; and I learned about the ’20s and ’30s through her eyes. On the day of the exam, I came in singing, stayed in character (others did essays, etc.). Mr. Baldwin asked questions, and I answered based on what Bessie Smith would have said. It’s the only way I got through it.”

This is a perfect example of a teacher creating an opportunity for a student to be motivated about learning. Rather than learning for the purpose of answering a question on a test, Kendra Alston channeled her interests into learning the content. And the lesson still resonates with her more than 15 years later. “What I would say about motivation is to find what your students love to teach them.”

The myth that you cannot motivate other people is only partially true. Although you cannot make students be motivated,  if you make specific efforts to connect with them, they will respond.

Myth Four: You Cannot ‘Unmotivate’ Someone

This is also not true. Teachers can negatively impact a student’s motivation. Kendra shared an example with me of an instance from her childhood. When she was in the third grade, she loved to write; she still does. During each of the first two days of school, the teacher asked students to write about a certain topic. Although she always loved to write and everyone else was writing, she just sat at her desk—upset because she had always loved to write. On the second day, Kendra again wrote nothing, thinking, “I was the dumbest thing in the world.”

The teacher called her parents and informed them that Kendra had a U (unsatisfactory) in writing. During the subsequent parent conference, her mother asked, “What did you ask her to write?” On the first day of school, the teacher told the class to “write about the time you had a sleepover,” and on the second day, students had to write about a “time you had a fight with a brother or sister.” Kendra’s mother explained that Kendra had never been on a sleepover because she and her husband did not allow that until junior high. Also, Kendra was an only child. “How can you ask her to write about something she doesn’t know about?” Despite a request from her parents to let her write about something she knew or was interested in, the teacher refused.

In this case, Kendra’s teacher actually hurt her motivation. Whether it’s because of intentional efforts, or simply a lack of understanding, our actions can have a negative effect on a student’s motivation.

I truly believe that we should treat each student in a way that nourishes a sense of hope for the future. We can connect with students and create opportunities for their motivation to increase. But at a minimum, we should follow the same rule as physicians and first, do no harm.

Discover the benefits of mastering differentiation in the classroom by signing-up for Barbara's upcoming webinar: Differentiating Instruction without Lowering Rigor

Myths about motivating students has instantly increased my desire to be better in this area.