I am an unafraid educator 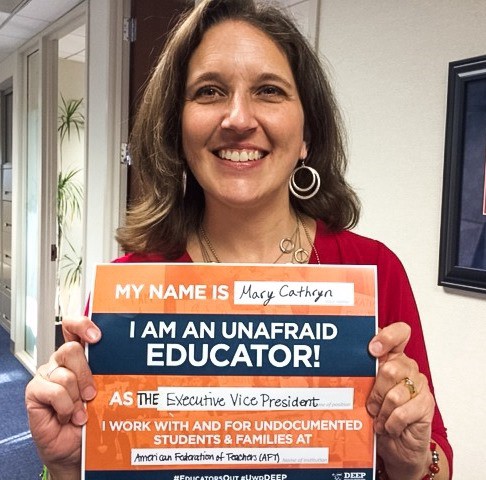 I became a teacher to make a difference in people’s lives. And I’ve never met another teacher who didn’t feel the same way.

This is why National Educators Coming Out Day is so important to me and the teachers, paraprofessionals, early childhood educators, and higher education faculty and staff across the country who I represent — and the millions of students we serve. Today, we are “coming out” in support of undocumented students. Today, we are stepping forward to say enough with the xenophobic rhetoric that drives fear in the hearts and minds of our most vulnerable students. Today, we are stepping forward to combat the vitriol too often heard in the debate on immigration with a new immigration story — one that says: Every child has a place in our public schools, our classrooms and our hearts.

Our national story is spun on the tales of Ellis Island, the melting pot and the Horatio Alger myth. However, there is one immigration story told without much nostalgia — one that is not only wrong but dangerous. That is the story of the millions of hard-working, aspiring Americans who are the economic backbone of this country, yet are vulnerable to abuse and exploitation because of their undocumented status. It is the story of the many students — or DREAMers — who, by no fault of their own, are in this country undocumented. And it is the story of the recently arrived unaccompanied refugee children who risked everything to come to this country only to be pushed to the periphery of our society.

When we lift up one immigration story and not the other, we send the message that some immigrants are more welcome than others. Children watch us, and they learn from us. If we communicate to them — through our words or actions — that one immigration story is good while another is bad, they will believe us. Take the recent horrific attack in a Coon Rapids, Minn., restaurant. A woman, who immigrated to the United States from Kenya, was eating dinner with her family when she was brutally assaulted by another diner for speaking Swahili. The woman suffered deep cuts and serious injuries to her face. Her attacker sent a message of hate — one that is reinforced by the venomous rhetoric we hear from Donald Trump and other Republican presidential candidates, and by the bigoted legislation pushed forward by some in Congress that aims to deport millions of immigrants.

Either all immigration stories have value and contribute to the strength of America, or none of them do.

Right now, there are millions of undocumented youth across the country stuck in legal purgatory as those in Congress and the courts debate their official status. As educators, we teach these children every day. We worry about whether they — and their parents and families — will be here tomorrow. And whether they will find the resources and support they need to build a better future in America. Which is why I join thousands of educators across the country to reaffirm our commitment to all our students — no matter their ZIP code, where they were born or their immigration status.

My union, the American Federation of Teachers, launched “Reclaiming the Promise of the American DREAM,” an initiative that brings educators, parents and students together to work on the implementation of the Deferred Action for Childhood Arrivals (DACA) and Deferred Action for Parents of Americans and Legal Permanent Residents (DAPA) programs. So far, we have created programs in 30 urban and rural areas, including education forums and pre-screenings. In collaboration with community partners, such as United We Dream and the National Immigration Law Center, we have helped more than 4,000 students and community members adjust their status through DACA and citizenship clinics. Some of our own members have benefited from DACA, and we have created a resource guide to help our members support undocumented youth to become “DACAmented.”

Leading up to National Educators Coming Out Day, many of our members have signed a pledge to support undocumented students. They want their students to know that as we fight to have our voice heard in the decisions made about public education in this country, we are their voice as well.

As educators, we believe that all schools should be safe havens where children can dream their dreams and achieve them, and it is our job to help them get there. And as educators, we believe that it is up to us to help every child feel safe, protected and loved — and to stop bullying wherever it occurs, whether at the playground or on the presidential campaign trail.

Our union’s work with community on DACA and DAPA is just one piece of our overall work to teach our students that if you came to this country seeking a better life, it doesn’t matter where you came from or how you got here. Our nation must still be a nation that welcomes immigrants. Those who arrived at our shores 100 years ago at Ellis Island, or two weeks ago in El Paso, Texas, are all part of the fabric that makes this nation strong.

As an educator, student or member of the community, I hope you will join us today, on National Educators Coming Out Day, to pledge to support undocumented students as they fight for their rightful place in our nation’s future.

To learn more about the AFT’s work on immigration reform, visit www.aft.org/immigration.

A Spanish-language version of this appeared on Univision.com.   This blog was originally published on Medium's School House Voices

Great thing this is very nice need to every people take unafraid education with our professional work, we are also provide online education get further query: Thanks
Newsletter sign-up form
Share My Lesson