By Annette Licitra and Leslie Getzinger

You know Kara McCormick Lyons. She’s your favorite teacher ever. Gung-ho. Irrepressible. A go-getter. She is president of the White Plains (N.Y.) Teachers Association, and she is an evangelist for First Book, the AFT partner that together with our members has distributed more than 5 million new, free books to children in need. Last but not least, she’s a passionate advocate for public schools.

Lyons is all those things. The middle school teacher envisioned staging a huge event in March to promote the U.S. census and give away 40,000-plus books from First Book. She went in with three basic goals: deepen school-community ties, promote literacy, and persuade everyone to fill out their census forms. 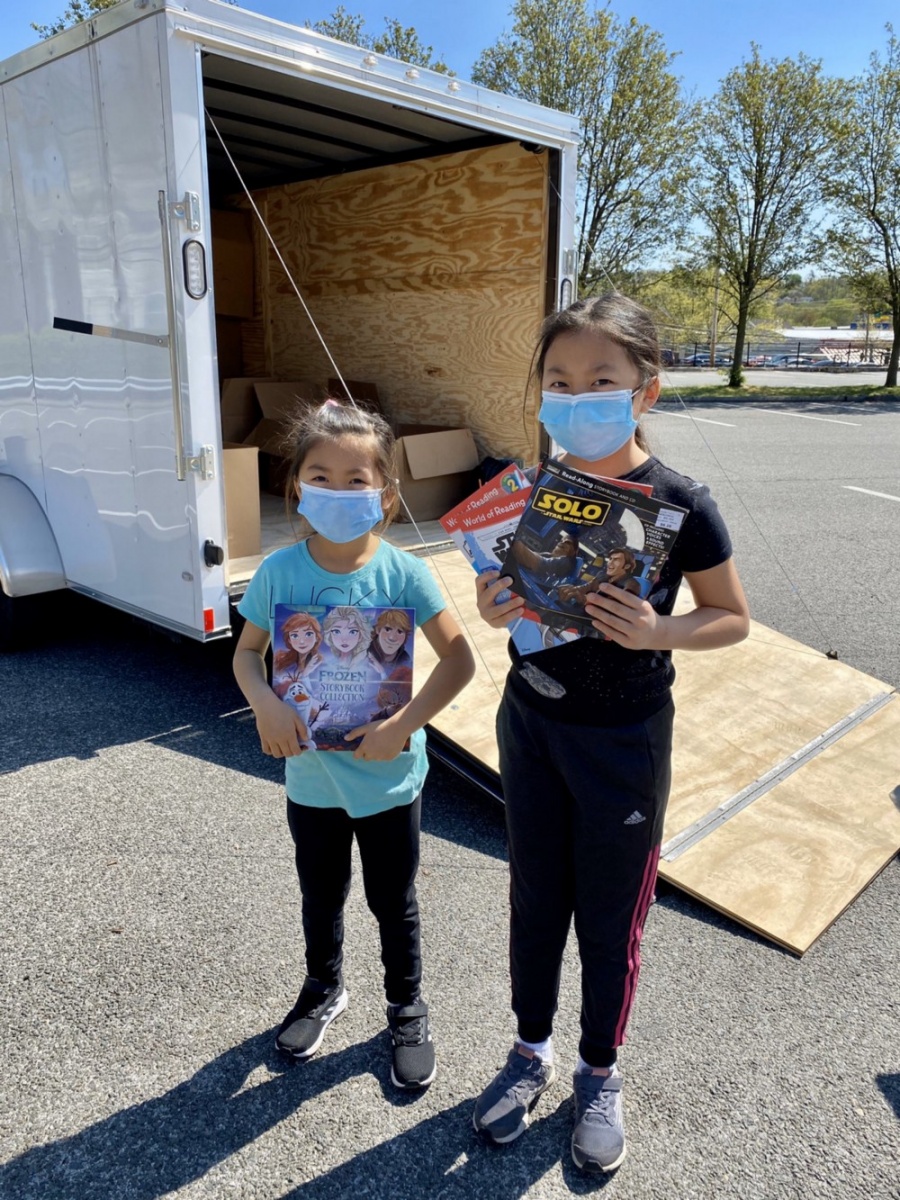 But suddenly, White Plains found itself smack in the middle of a pandemic. The suburb of New York City is right next door to New Rochelle, one of the nation’s first hotspots for COVID-19 and the district where Lyons’ husband also works as a middle school teacher.

“The need is so great because people are in crisis,” Lyons says. “COVID is having a tremendous impact. Food insecurity is widespread. People are losing their jobs.”

With her knack for getting things done, Lyons mobilized virtually all her district’s employees to register with First Book in only a few weeks to qualify for a truckload of free books. White Plains has a large Hispanic community, so on top of what First Book was sending on the semitractor-trailer, teachers and staff also ordered bilingual books from First Book Marketplace to build parent engagement and encourage reading at home.

They were all set for the truck to arrive on March 27 — just in time for what was then the census deadline — but the coronavirus derailed their plans. With schools closed and a stay-at-home order in place, not only did this mean that the book shipment got pushed back, but any idea of having a big community event was going to be impossible for the foreseeable future.

As you may have guessed, this setback did not stop Lyons or her superintendent, Joseph Ricca, one bit. They ran commercials on public access television about the importance of the census in school funding. And since the lockdown started, Ricca has held a daily read-aloud for students and families. During one of these readings, he urged families to fill out their census forms, encouraged them to pick up We Count! — census books in English or Spanish that the AFT provided — and thanked the union for providing them.

“Since we couldn’t have one huge event, he read aloud from the We Count! book,” Lyons says. “Even though it’s not a story narrative, he did a walk-through of it and let everybody know how important the census is.”

Meanwhile, the National Guard was bringing in food for the community pantry, serving thousands of meals at five distribution sites. This gave Lyons and Ricca an idea. Maybe union members could distribute books at those sites. After receiving their book shipments, the union and the district decided to use the school system’s trailer to transfer books to the feeding sites, food pantries and a homeless shelter.

For example, one church gets deliveries from a food bank, so its pastor suggested parking the trailer right outside. “It was a huge success,” Lyons says. “We gave away hundreds of books to almost every person on that line for their children. The PTA is so appreciative, as is the entire community. The books have been a real rainbow.”

For each distribution, the district provides custodians, drivers and trucks to move books to the site. Union members like Eliseo Lugo and Jen Stein, school board members, administrators and public officials all volunteer to hand out books, Lyons says, including “one guy who’s always over the moon when he sees the books.”

So far, they’ve had eight events, including one on June 1 at a community center. “We parked outside and shared with the families waiting on line,” she says, “and other folks came, too.” A highlight was connecting with the White Plains Youth Bureau: “They want us to come to some of their other food distributions. We will also be putting aside books for the kids they serve when they reopen.”

A Passion for Community

How heavy a lift is this? Lyons admits she’s stretched as a teacher and union leader, married to a teacher, with their own kids at home during the COVID-19 crisis. But she won’t give it up and, from the way her activism has unfolded, you can clearly see her passion for the work.

She learned about First Book through Philippe Abraham, treasurer of her state federation, New York State United Teachers, whose community outreach director, Paul Webster, asked her, “Hey, do you want a pallet of books?” Lyons recalls. “And I said, ‘How can we get more?’”

From the start, First Book was “an amazing partner, holding my hand, cheering me on. I told them I was sparktacular and sparktastic, and that I would make this happen. They were like, ‘Whatever you need.’ The shutdown here in New York gave us time to talk to religious groups, community partners and neighboring districts, which are still on pause, even though some of the restrictions have lifted.”

That pause gave public school advocates a chance to realize that coming out of lockdown, their schools, along with state and local public services of every kind, will be facing a budget crisis. And that’s why the White Plains teachers and NYSUT are now fighting for the $3 trillion HEROES Act — the first rescue bill in Congress that would truly help workers and families — to pass and become law. They’re joining virtual town halls, signing petitions and calling their legislators every day.

Lyons has more dreams for the book trailer, like having it play ice cream truck music, but for a moment she takes a deep breath and expresses pride at how well the union and the school district are working together during this difficult time. 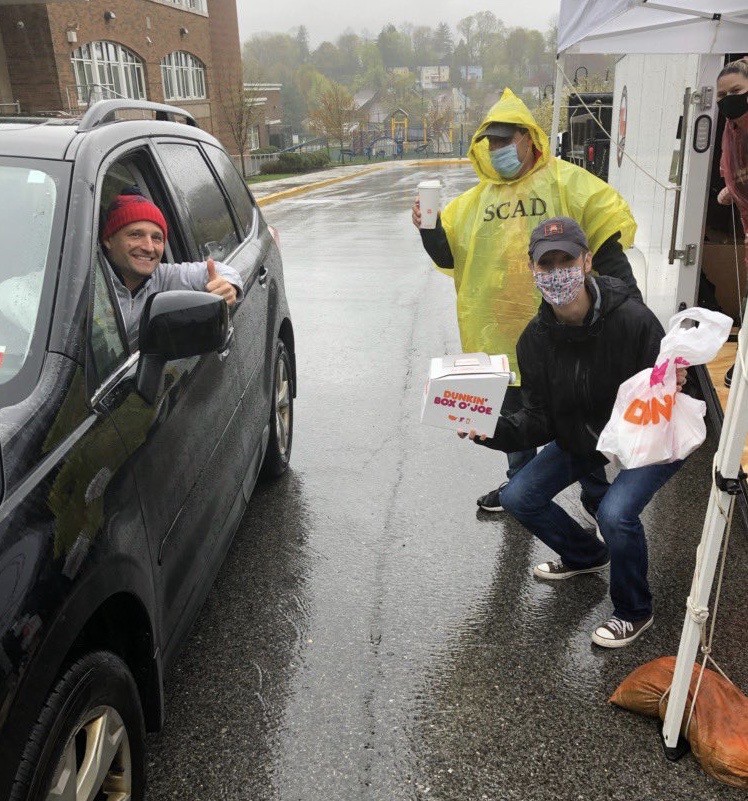 “I cannot tell you enough about the value of coalition-building,” she says. “This highlights why we need community schools, and I think we are in a position now where we can grow and expand our work in the community. First Book has been very much like a fairy tale here, and the irony is not lost on me that there are a lot of Disney books with happy endings going to our kids.”

“It’s so amazing and powerful!” she exclaims, then adds quietly: “Years ago, when I was watching all the school reformers, I realized they didn’t have the answers. The answers were inside of us, in our union and in us. Period. Hard stop. Everyone should be unionized.”

Republished with permission from American Federation of Teachers. Originally posted on AFT on June 9, 2020.