Border Crisis Lesson Plan: The Power of Photographs from Vietnam to Today 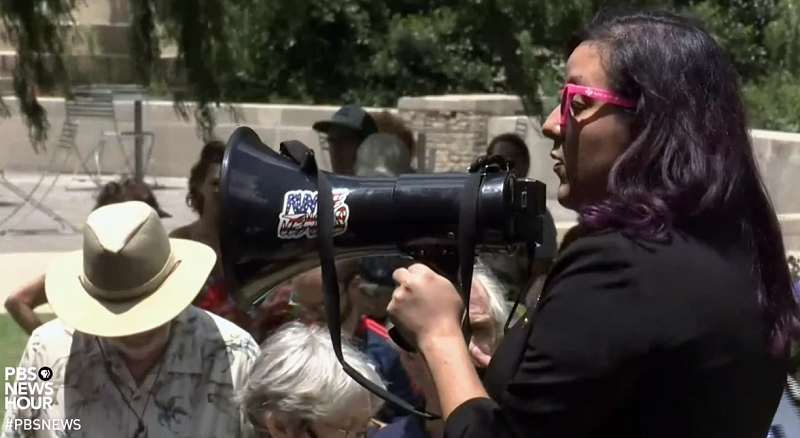 We encourage you to read through the whole lesson and complete the questions that make the most sense for you and your students. The lesson plan explains the U.S.-Mexico border crisis, including conditions in the migrant detention centers; reactions by politicians and members of the public; and the graphic photograph of Óscar Alberto Martínez Ramírez, a migrant father from El Salvador, and his 23-month-old daughter, Valeria, who both drowned crossing the Rio Grande River on June 23rd.

This lesson also focuses on how media literacy can help students understand how graphic photographs of humanitarian crises can affect individuals on an emotional level; lead to civic engagement; and in some cases, policy changes.

This lesson discusses some of the graphic images related to the border crisis as well as other points in history in which such images changed the conversation. There are links to some of the images discussed in the lesson, if you choose to analyze and discuss them with your students. We encourage you to talk with your school administrator and colleagues about the lesson and ways to make it work best for your students. You may also want to check out resources from PBS WETA’s Colorin Colorado’s “The Crisis at the Border: What Educators Need to Know.

Read the summary of the border crisis, watch the videos and answer the discussion questions below. Turn on the “CC” (closed-captions) function and follow along with the transcript here.

Summary of the Border Crisis Situation

In one of a number of speeches made by members of Congress on Monday, Rep. Ayanna Pressley, D-Mass., talked about her experience touring U.S. Customs and Border Protection (CBP) migrant detention facilities in Texas. Pressley discussed meeting women including mothers and grandmothers, many of whom have been traumatized after enduring a harsh, dangerous journey from their homeland, as they seek asylum in America. Pressley also called out hecklers who yelled that they didn’t want migrants coming to America. “Keep yelling. This is very appropriate. Vile rhetoric for vile actions. Hateful rhetoric for hateful behavior. Racist words and venom for racist policies. Very appropos,” she said.

Monday’s press conference followed an Associated Press report last week which stated inhumane conditions were found in a CBP migrant detention center in Texas-Mexico border. Immigration lawyers said there was not adequate food, water or sanitation. CBP officials responded to NewsHour’s story by stating: “U.S. Customs and Border Protection (CBP) leverages our limited resources to provide the best care possible to those in our custody, especially children. As DHS and CBP leadership have noted numerous times, our short-term holding facilities were not designed to hold vulnerable populations and we urgently need additional humanitarian funding to manage this crisis.”

The AP report came out just before the graphic photograph of Óscar Alberto Martínez Ramírez, a migrant father from El Salvador, and his 23-month-old daughter, Valeria, was taken on June 23rd by journalist Julia Le Duc.  The photo showed both father and daughter face down in the water having drowned crossing the Rio Grande River.

In reaction to the photo, President Donald Trump said, “I hate it,” but then blamed Democrats for not enacting new laws: “They have to change the laws,” he said, adding, “And then that father, who probably was this wonderful guy, with his daughter, things like that wouldn’t happen.” Democrats have spoken out on behalf of the migrants as well as some Republicans, including Sen. Ron Johnson of Wisconsin, stating: “I don’t want to see another picture like that on this border,” said Sen. Ron Johnson (R-Wis.), chair of the Homeland Security and Government Affairs Committee, “We have to do something,” he added.

1) Essential question: How might seeing graphic photos related to the border crisis affect public opinion as to how the United States government should respond?

2) How should the U.S. government treat asylum seekers? Why are migrants, predominantly from Central America, seeking refuge in the U.S.? Why are some Americans against allowing migrants into the U.S.?

3) What would you do if you were in a similar position to the migrants in which you feared for your family’s safety due to brutal gang violence or did not have basic services like clean water and sanitation, health care or education?

4) Take a look at the following photos inside the detention center taken by the Department of Homeland Security’s Office of the Inspector General. Do they affect your view as to the problems at the border? Should the Trump administration change course on how it is treating migrants? What are possible solutions?

6) The recent image of Óscar and Valeria may bring to mind a similar photo of a three-year-old Syrian refugee boy, Aylan Kurdi, whose body had washed ashore after the boat he was traveling in capsized in Turkey in 2015. Aylan’s family was attempting to escape Syria’s civil war. Eleven people drowned, including Aylan’s five-year-old brother and their mother. Read the NewsHour’s see transcript of “Will the haunting image of an injured Syrian boy make a difference?” and the print story (warning: graphic image) “Why a photo of a dead Syrian boy touched a nerve on an enduring crisis” to learn more. Ask your students:

“The ethics of the image: Different outlets treated the photo of Óscar and Valeria Martínez differently. Some (including CNN) showed it on their homepages; others appended graphic-content warnings to the tops of their stories. On Twitter, Philip Bump, of the [Washington] Post, argued that the AP was wrong (his tweet has since been deleted) to use the photo as its share image on social media; “The glib response is ‘make people look,’ not ‘allow people not to,’” he wrote. In 2015, following Kurdi’s [the young Syrian boy] death, CJR’s Jack Murtha weighed the ethics of the question.”

Ask your students: Do you agree with Washington Post’s Bump that the AP (Associated Press) was wrong to use the photo as its share image on social media? Why or why not?

8. For more than a century, photography has a played a critical role in shaping American society. One of the most powerful examples of photojournalism involved the Vietnam War. Images of children being killed, Buddhist monks lighting themselves on fire and a man being shot by a South Vietnamese general were responsible for shifting how Americans felt about the war. Take a look at the resource here by Southwest Center (Warning: Contains graphic and disturbing photos).

Optional: Choose one activity from the lesson that examines one of the famous photos from Vietnam and have your students complete it in class or for homework.

9) Media literacy: It’s good practice to read a few different sources, especially on controversial issues. However, time is often of the essence, and this strategy can be difficult to carry out. Jigsaw activity: Assign one of the sources below to different groups of students, and have them report back their findings. What was the main idea that the writer was trying to convey? What new information did students learn that hadn’t previously come up in discussions? (Warning: Some of the links contains graphic images.)

‘They wanted the American dream’: reporter reveals story behind tragic photo (The Guardian)

The Media Today: The shocking image from the border, and the lessons from Aylan Kurdi (Columbia Journalism Review)

Border Crisis: The Power of Photos

Lesson Plan: A picture is worth a thousand words (PBS NewsHour Extra)

History Through Primary Sources: Every Picture Has a Story (Smithsonian Education)

Study: What Was the Impact of the Iconic Photo of the Syrian Boy? (National Public Radio)

Refugee Crisis in Europe: How Should the World Respond? (Anti-Defamation League Education)

The War in Vietnam: A Story in Photographs (National Archives)

Register On Demand, for Free
REGISTER

This guide is written to be used with Re-Imagining Migration's Moving Stories Storytelling App. The provides an engaging classroom experience that allows students to...

In what has been named the largest refugee crisis since World War II, more than 65 million people have been forced from their homes. Around the world, one in every 122...