What do El Paso, Dayton mass shootings say about America? 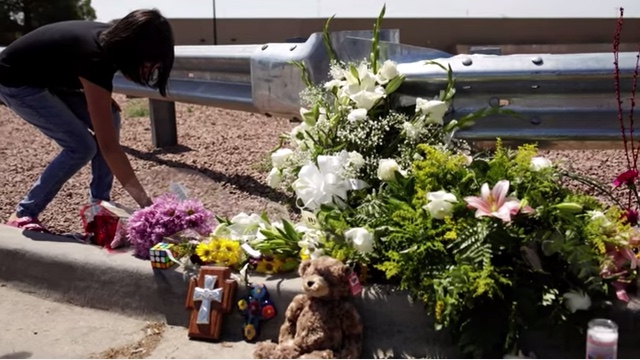 Directions: Read the summary, watch the videos and answer the discussion questions below. You may want to turn on the “CC” (closed-captions) function and read along with the transcript here.

Teachers’ note: For guidance on how to talk with students about mass shootings, you may want to read SAMHSA’s “Tips for Talking With and Helping Children and Youth Cope After a Disaster or Traumatic Event: A Guide for Parents, Caregivers, and Teachers.”

Summary: Terror and tragedy grip America with two deadly mass shootings in less than 24 hours. In downtown Dayton, Ohio, a gunman killed nine people, including his own sister, at approximately 1-am Sunday morning. Police said the carnage lasted less than a minute before they arrived on the scene and killed the shooter. On Saturday, just 13 hours earlier in El Paso, Texas, a mass shooting in a Walmart left 20 people dead and wounded at least 26 others. Investigators are treating the massacre as a case of domestic terrorism and will file capital murder charges against the suspect, now in custody. They are also trying to determine if an anti-immigrant “manifesto” posted online was penned by the alleged 21-year-old white male shooter.

1) Essential question: What do gun massacres like El Paso and Dayton say about who Americans are as a society?

2) Watch the 2-minute video about the El Paso massacre and why authorities are treating the massacre as a case of domestic terrorism.

*What is “domestic terrorism”?  (Definition of terrorism: “If the event is meant to cause public terror…or chaos,” according to Harvard’s Joan Donovan–see interview in question #4.)

*Why do authorities not treat all gun massacres as acts of domestic terrorism? Who decides if a case receives this designation?

3) Why are mass shootings more likely to happen in the United States than other developed countries? If time allows, read the Quartz article “The 292 mass shootings in the US so far this year, mapped” and share this quote with your students:

“As Axios’ Mike Allen pointed out this morning, the US has the highest gun ownership rate of any other country in the world. In the US, there are 120.5 guns per 100 people (pdf)—more than twice the rate of Yemen, which has the next highest rate at 52.8 guns per 100 people. The high rate of gun ownership and the spread of white nationalism and anti-immigrant sentiment are largely blamed for fueling the unprecedented number of mass shootings in the US.”

Ask your students: Do you think gun reform measures are needed in the United States to prevent further atrocities? What are some gun safety examples which would may make citizens safer?

4) Media literacy: Watch the interview below with Joan Donovan, director of the Technology and Social Change Research project at Harvard University, to discuss how reporters should — and should not — cover mass shootings.

*While reporting on the white supremacist ideology behind mass shootings, how might journalists inadvertently be magnifying the message?

*According to Donovan, what are some strategies journalists can do to more responsibly report on mass shootings?

*Why have white supremacists shifted their terminology?

After the discussion with your students, you may find that your students want to continue the conversation. A good media literacy lesson for students is to invite their families to watch or read news stories with them in order to address concerns their children may have. We recommend these stories which focus on different aspects of gun violence.

The ‘gamification’ of domestic terrorism online.

‘When is enough going to be enough?’ asks Dayton mayor.

Texas Tribune reporter Julian Aguilar joins Hari Sreenivasan via Skype from El Paso for more on how the community is coping with the loss.

Find free resources for supporting safe schools for students and teachers who want to become better informed and take action against gun violence.