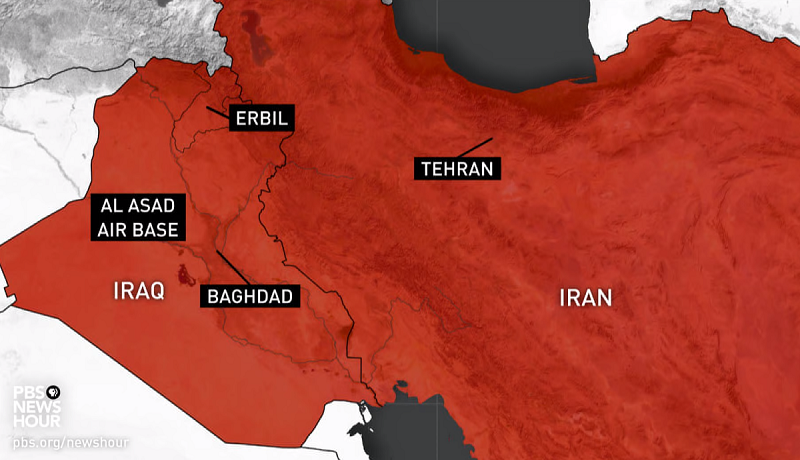 Watch the video and answer the questions below. You can turn on the “CC” (closed-captions) function and read along with the transcript here. For additional background on Iran and General Soleimani, use this NewsHour Extra lesson. Teacher’s note: We suggest you stop the video at 5m:43s for the sake of time.

Iranian state TV reported that the strikes were in retaliation for last week’s killing of General Qassem Soleimani, a top Iranian general. There were no immediate reports of casualties, according to two Iraqi officials.

Soleimani’s killing and the strikes by Iran follow an increase in tensions across the Middle East in the last few years after President Donald Trump’s decided to unilaterally withdraw the U.S. from Tehran’s nuclear deal with world powers. The deal was intended to avoid Iran building a nuclear weapons program.

Iran’s foreign minister said a ballistic missile attack was a “proportionate measures in self-defense” and said it did not wish to escalate the situation but rather defend itself against any aggression.

‘All is well!’ President Donald Trump tweeted shortly after the missile attacks, adding, ‘So far, so good’ regarding casualties.

Ain al-Asad air base houses about 1,500 U.S. and coalition forces, including 70 Norwegian troops.

Iran's top General and second in power, Qassem Soleimani, was killed by US drone strike. What does this mean for conflict in the Middle East?

On November 15, 2011, Mohammad Javad Ardashir Larijani spoke at Carnegie Council for Ethics in International Affairs on a variety of topics concerning Iranian politics. At the time of the talk, he...

Children of Heaven is a contemporary Iranian film about families, compassion, moral responsibilities and issues of limited resources. This film, shot in and around Tehran, follows the lives of two...

This resource was designed to provide a critical analysis of the graphic Persepolis. This includes a PowerPoint presentation, a handout on graphic novel/comic terms and a reading quiz. Persepolis...