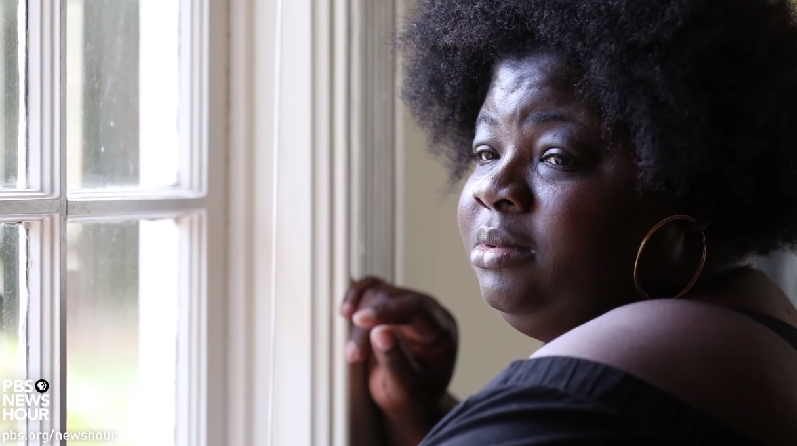 Essential question: What does the issue of police brutality say about how America has dealt with its history of racism?

Directions: Read the summary, watch the video and answer the discussion questions. You may want to read along using the transcript here or turn on “CC” closed-captions. If time permits, read the article “New study gives broader look into how police killings affect black Americans’ mental health” by NewsHour’s Joshua Barajas.

Summary: Police shootings against African Americans have prompted a public outcry in recent years, triggering a national conversation on the need for reform. A year ago, Tetrina Blalock’s cousin was killed by police in Mississippi after being shot more than a dozen times following a narcotics pursuit. In this Brief But Spectacular, Blalock reflects on her own encounters with law enforcement. Put in the position of feeling targeted because she is black, Blalock emphasizes the need for respect. In 2013 to 2015, at least 49 percent of more than 100,000 black adults had exposure to one police killing of an unarmed black American in a period of three months. Police brutality cases like Philando Castile and Trayvon Martin have created a massive public outcry involving protests and social movements like #BlackLivesMatter.

1) Essential question: What does the issue of police brutality say about how America has dealt with its history of racism?

2) What issues has Tetrina Blalock faced with law enforcement?

3) What aspect would you like to hear Blalock talk about more? Why?

4) How can young people help to dismantle racism in America?

5) What are some actions you can take if you experience racist or prejudiced remarks and behavior directed at you or someone else (note: this could vary in different situations)?

6) Who can you talk with at your school or home if you are feeling upset by issues discussed in this story including gun violence, police brutality or racism?

7) Media literacy: Brief But Spectacular is a popular series produced by Steve Goldbloom who wrote this lesson for Extra when he noticed teachers were writing him to say they were using “BBS” with their students. How is the structure of these segments different from most of the videos you see on the NewsHour (and perhaps other news clips your teacher may use to discuss current events)? What might be the strengths of a more narrative approach to storytelling which Brief But Spectacular employs? Is it also important to watch news videos with different individuals and points of view ? Explain your response.

Did you know that PBS NewsHour has a youth journalism program called Student Reporting Labs (SRL) found in 150+ schools across the country? A few year ago, SRL produced a series on race called “Crossing the Divide.” Check out these short, powerful videos here.