Talking and Teaching about Walls and Borders 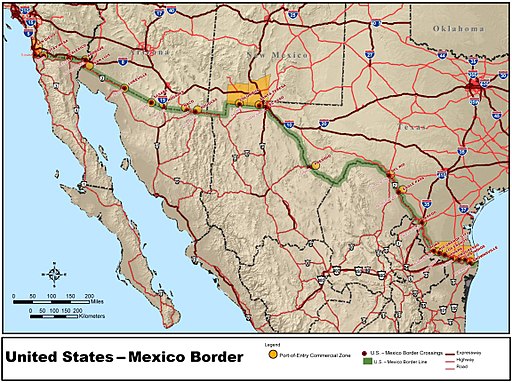 President Trump’s campaign promise to build a wall along the U.S. border with Mexico continues to generate controversy. Debates about funding, the purpose, and need for the wall often boil over, ending in talking heads raising their voices on 24-hour news channels. As we prepare to post this resource, the United States government is partially shut down over a dispute about funding for the wall.

Debates about the wall center on fundamental differences about the meaning and purpose of a border wall. Indeed, the wall itself means many things to different people. For some, it is an essential component of border security, others see the wall an insult to the Latinx community inside and outside of the United States, some see it as a way to prevent illegal border crossings, while others argue that it is a waste of money. Below you will find a curated collection of recent news stories about the wall, we have tried to represent a range of points of view and a variety of media to allow access for as many students as possible.

While discussions of contemporary migration are often polarized, they are essential. One reason that emotion about issues of migration run so strong is that debates over the movement of people are among the most important civic issues faced by societies around the world. They raise fundamental questions about inclusion and exclusion, identity, and national sovereignty. Below we introduce some context for discussing the wall, and an art based exercise intended to promote respectful reflection and discussion across difference.

Migration has been an essential part of the human experience well before the creation of national borders. Indeed, humans were migratory before they ever built cities. That said, it wasn’t too long after humans first built cities that they first began to build walls. They were created for defensive purposes, and to keep people considered undesirable, out.

Enforcement along the U.S. Mexico became more of a priority during the 1960s after the 1965 immigration and naturalization act. However, it wasn’t until 1993 that the U.S. government, led by President Clinton, set aside money for a 13 mile stretch of wall. Despite additional construction sections of border walls, undocumented migration rose throughout the 90s; however, it has decreased every year since 2007.

Instead of starting a lesson by delving into the middle of a controversy, we find it useful to provide a safe distance to begin reflection. In this case, we suggest using an image created by the French artist J.R. The piece, a gigantic scaffolding installation featuring the photograph of Kikito, a one-year-old boy from Tecate, Mexico, was placed on the Mexican side of the border facing the United States. We suggest following these three simple directions for interpreting JR’s work and considering the message he is hoping to send.

The large photograph was constructed on the Mexican side of the border facing the United States. Click on the image for more information.

This slideshow includes images that focus on the placement of J.R.'s "Kikito.": Embed from Getty Images

As a whole group, discuss the range of interpretations of the work. What themes emerge? What differences did you notice between interpretations? And, how do you account for those differences? You might also consider following a similar protocol for interpreting a second J.R. image that was placed along the U.S./Mexico border. This commentary published Latino USA explores the way that artists can reshape our understanding of the border. The authors write:

The arts have played a central role in forming narratives of identity and place. Whether through music or through visuals, the arts have a particular sensory and discursive power to shape consciousness and understanding of people and spaces.

As the border art suggests, debates about the wall are about more than funding and plans for construction. Deeply connected to discussions about the wall is a range of issues related to immigration. We frequently use the iceberg diagram strategy to help make the various issues that come together in a civic debate visible. Instead of telling students what you believe is fueling the border debates, ask them what they believe is below the surface. To conclude, we like to employ Project Zero thinking routines to help students to recognize the significance of a particular public debate. In this case consider using the Three Whys. Ask students:

Encourage students to think critically about their knowledge of the discussions of a border wall in the U.S. In this variation of a K-W-L chart, ask students first to list information that they are confident they know is true related to debates about the wall. As students list information, explain that you are looking for verifiable facts. In a separate category ask students to record what they have heard that they have not verified or are unable to confirm.

Below we have included a variety of news sources students could use extend their understanding of the issues involved. As students read the various sources, encourage them to be aware of the various perspectives offered in the text. Consider asking them to use another Project Zero thinking routine as they gather information. This routine is called Step In - Step Out - Step Back. Here is how it works:

Trump: Government won’t reopen ‘until we have a wall via PBS Newshour, December 25, 2018, https://www.pbs.org/newshour/politics/trump-government-wont-reopen-until-we-have-a-wall

While the US debates caravans and wall, thousands of migrants are dumped in border cities via USA Today, December 28, 2018 https://www.usatoday.com/story/news/nation/2018/12/28/us-mexico-border-migrants-dumped-america-border-cities/2431494002/

For context on current debates about the border, consider these news sources:

A look at U.S. policy toward immigration and border security with Mexico over the past 60 years: PBS.

The Raging Controversy at the Border Began With This Incident 100 Years Ago In Nogales, Arizona, the United States and Mexico agreed to build walls separating their countries via Smithsonian Magazine, July 2018, https://www.smithsonianmag.com/history/raging-controversy-border-began-100-years-ago-180969343/#CZVxSlEfHszuc5K5.99

Working individually or in groups ask students to prepare a one-page policy recommendation regarding the border wall that includes a justification for their position. You might offer students a chance to present their proposals to their peers, or to craft letters to political representatives describing their understanding of the issues involved.

Re-imagining Migration’s mission is to ensure that all young people grow up understanding migration as a fundamental characteristic of the human condition, in order to develop the knowledge, empathy and mindsets that sustain inclusive and welcoming communities.

We live in an era of mass migration.  Young people – whether they are part of an arriving or receiving culture – strive to form their identities as learners, community members and change-makers in the context of this global phenomenon. At Re-Imagining Migration, we are catalyzing a community of educational leaders and social organizations around making migration a part of their curriculum and culture so that all students can feel supported in their social, emotional, academic, and civic growth. Join us in this important work.

On October 30, Axios, a U.S. online news organization, released an interview with President Donald Trump in which he explained that his team is working on an executive order to change the...

This book explores what people who are immigrants bring with them when they leave their homes. It's a story about family. And it's a story to remind us that we are all dreamers, bringing our own...