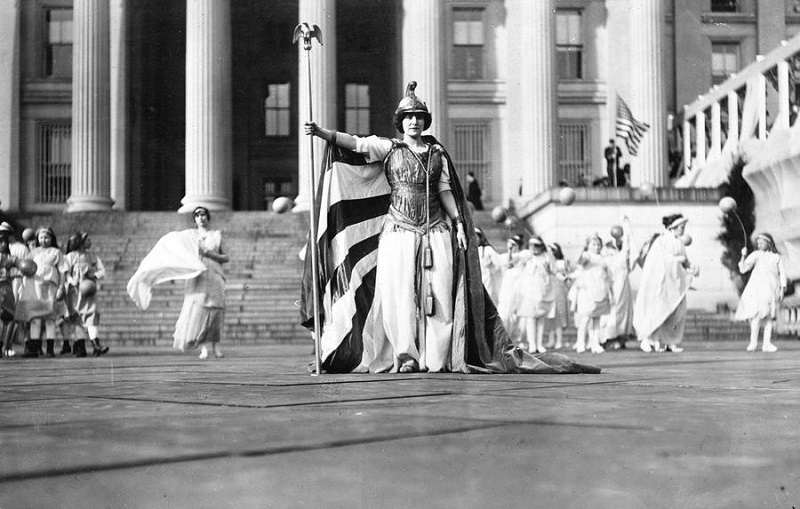 Aug. 26, 2020, will mark the centennial celebration of the 19th Amendment to the U.S. Constitution, which guaranteed women’s right to vote and became a milestone on the road to building American democracy. How did we get from the Founding Fathers—that small, brave group of mostly propertied, white men, who took for granted their right to make laws for everybody else—to where we are today?

“It was we, the people; not we, the white male citizens; nor yet we the male citizens; but we, the whole people, who formed this Union,” said Susan B. Anthony in 1873. When Anthony and her friend and colleague Elizabeth Cady Stanton first began organizing for women’s right to vote, the idea was considered laughable.

The 19th Amendment and the Abolitionist Movement

Stanton included the right to vote in her draft resolution for the first Women’s Rights Convention in Seneca Falls, N.Y., in 1848—but her audience was nervous about such a rash demand. It was Frederick Douglass, the former slave and abolitionist, who stood up to support Stanton. His explanation of the importance of voting made the difference, and the resolution was adopted.

The combination of Elizabeth Cady Stanton and Frederick Douglass was a powerful force that day—and a powerful example today. It was through building coalitions that the suffragists ultimately won the right to vote.

Discover Share My Lesson Partner, the Frederick Douglass Family Initiative, and learn more about an American icon and the Abolition Movement.

Many suffrage leaders began with abolition. The Grimké sisters of South Carolina left their slave-owning family to talk about the horrors of slavery. Their talks were so interesting that men too came to hear them; and for daring to speak at promiscuous “meetings, the sisters were denounced by local Ministers”. Now the sisters understood that they had to fight for the right to be heard. They continued to lecture on abolition—and added women’s rights to their agenda!

The 19th Amendment and Working Women

Working women were an important part of the movement. Susan B. Anthony was a teacher and paid far less than male colleagues. Her call for equal pay and equal respect for women teachers was met with furious opposition. Other women, trying to keep the money they had earned, or fighting for custody of their children, realized that they needed the vote to protect themselves—and their families.

“The time has come when working women must be enfranchised in the State of New York and thus have power to determine the conditions of their lives,” the Conference of Women Trade Unionists said in 1907—a plea tragically underscored by the Triangle Shirtwaist Factory Fire in New York City in 1911, when 146 young immigrant workers, mostly women, died in an unsafe building.

The 19th Amendment and the Progressive Movement

Leaders of the progressive movement, including Jane Addams, spoke out, arguing that women voters were more likely to insist on clean streets and safe food for their children. Ida B. Wells organized the first suffrage club for black women in Chicago. Its members became a force in local politics, and Wells integrated the suffrage parade of 1913 by marching with her state delegation.

The suffrage pioneers were raised to believe that ladies should be protected—but these same women stared down hecklers as they spoke at street corners and county fairs. They went door to door with petitions, facing the disapproval of their neighbors, and lobbied state legislatures, political insiders who did not welcome a new set of voters. The women picketed the White House, and were sent to prison—but they continued to campaign.

From small parlor meetings to mammoth parades and hunger strikes, the women and men of the suffrage movement marched, organized, spoke up and spoke out. Their courage and strategic sense made our lives possible—and made our democracy stronger. Their stories have lessons for us today.

For more information on women's suffrage and the 19th Amendment, check out Share My Lesson's Collection of Free Resources.