Luke (they/he/she), a 15-year-old Human Rights Campaign youth ambassador from Texas, says, “Pronouns are important because they give individuals validation and a safe environment to be themselves.” We all know that classrooms need to be safe environments for students to thrive, but are educators brave enough to create that safe environment? Something as simple as a Student Introduction Card could make a student feel seen and affirmed. Stephanie Salem, a high school English teacher from AFT Local 1274 in suburban Chicago created the card. This strategy is similar to models seen across the country that allow for students to self-identify at the start of the year. Gender pronouns, while not always stagnant throughout the year, can be equally important to a student's identity as the pronunciation of names, language of origin, race, or nationality. 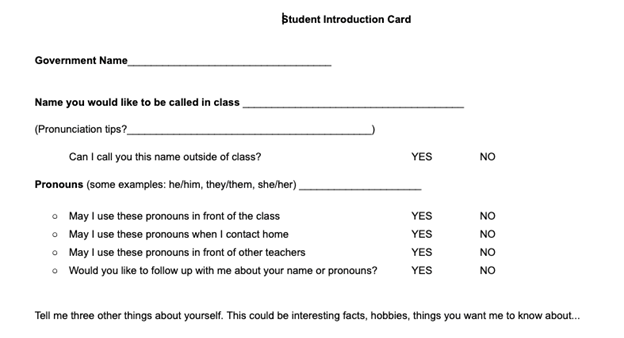 So why are some educators having trouble with acknowledging students’ pronoun preferences? Part of the answer is that we are often missing key information and qualitative data about what a pronoun is, why it’s important, and the impact of not acknowledging it.

What Are Gender Pronouns?

A quick look at the LBGT Life Center website will provide an easily accessible definition of gender pronouns and their use in the LGBTQ+ community. “Pronouns are used in place of a proper noun (like someone’s name). We use pronouns most often when referring to someone without using their name. In English, our most commonly used pronouns (he/she) specifically refer to a person’s gender. For queer, gender nonconforming, nonbinary and transgender people, these pronouns may not fit, can create discomfort, and can cause stress and anxiety.”

Why Are Pronouns So Important?

Again, gender pronouns are identifiers, similar to names. While a cis-gender person might not need to clarify their identifiers (he/she), a person who does need to make their pronouns explicit should be respected. Vanessa Valenzuela (she/her/hers), a preschool teacher from Cerritos, Calif., identities as a lesbian and has been a champion of identity work through AFT’s Identity Affirming Classroom Team (I-ACT). She suggests that more people are able to express themselves and share their pronouns because of those who “paved the way.” In relation to history, Luke says “I have had to do my own research about LGBTQ+ history. I never had opportunities to be taught about it in school. However, what I do know is that pronouns have always been existent … and people using different pronouns isn’t a brand-new thing.” Luke is absolutely correct. The historical context surrounding pronouns did not begin with today’s young people; but we do have them,  along with many others, to thank for continuing to keep these conversations in the forefront.

What Is the Impact of not Acknowledging Pronouns? 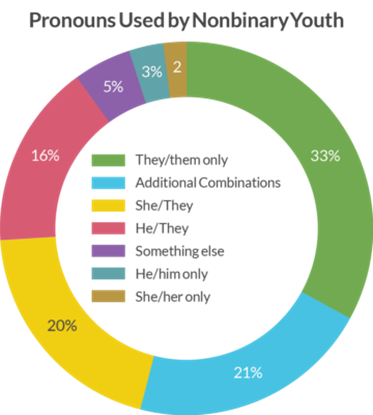 There are many resources to tap into for support in addition to the student introduction card the Hii strategy we introduced earlier, and you can always check out any of the websites referenced in this blog. Here’s our favorite way to learn—simply engaging with real people about their real experiences, and believing them.

When asked what kind of advice they would give to educators who want to be allies, Luke offered: “I love that allies are putting their pronouns in their bios. Instagram has a very important feature where you can put your pronouns next to your name. This personally makes me feel seen and validated.”

Similarly, Vanessa Valenzuela advises allies to ask for pronouns, not make assumptions, and make sharing pronouns the norm at conferences and in large settings. She shares with young people, telling them: “It’s OK to be afraid, but as more time passes and you accept who you are, it will get easier. It might take months or even years, but eventually you’ll be safe.” It’s reminders like these that might give students some hope that they will enter into a safe and affirming classroom this school year.

Kiesha E. Lamb (she/her/hers) is the director of educational equity at Assabet Valley Collaborative. She is an expert at facilitating rich and deepened dialogue among community members of all ages. With a focus on equity, she has linked people and communities that, at times, because of personal and/or systemic barriers, feel worlds apart. She uses art as a tool to advocate for the owners of absent narratives. Lamb grew up within two different major inner cities and graduated from Chicago public schools. She moved to the Twin Cities in Minnesota and earned a B.A. in educational equity and the arts from Metropolitan State University. During this time, she served as a professional development facilitator and consultant for Education Minnesota and the American Federation of Teachers. Lamb has dedicated her career to seeking equity in the corners of education, from a parent's access to their child’s education to a teacher’s access to culturally relevant materials.

Omar Salem (he/him/his) teaches English language learners and business education at Niles North High School in Skokie, Ill.  He is a proud member of the North Suburban Teachers Union where he chairs the Equity Committee. Salem has a bachelor's in business education, a master's in ELL and special education, and is currently working on an MBA in school business finance.  As the child of immigrants who was raised in a "diverse" community, Salem has felt the pain of racism, prejudgment and inequality but has also been able to see the power of different minds and experiences coming together. He has worked in a variety of roles within the school, including classroom paraprofessional, activity and club sponsor, athletic coach and teacher. He is an educator committed to anti-racist, anti-biased, and pro-Black practices in and out of the classroom.

Vanessa Valenzuela (she/her/hers) is a proud lesbian and a toddler teacher at Tracy Infant Center in the ABC Unified School District. She has been teaching children from birth to age 5 since 2012 in the Child Development Program and the Migrant Education Program. Valenzuela was born in Los Angeles, however, she was raised in Mexico for 14 years before returning to the U.S., where she graduated with honors from high school and later obtained her B.A. in human development in 2010; she went on to earn her M.A. in early childhood education with a specialization in trauma studies in 2016.