The Importance of Teaching Juneteenth

Learn how teaching Juneteenth empowers students to connect with their own communities and to become advocates in a diverse democracy.

Each year around June 19, Black communities across the country unite for a family reunion of sorts. Juneteenth activities feature the sights and sounds of Blackness: People enjoying art, music and food that connect them to a shared ancestry and history. They celebrate being their authentic selves. They celebrate freedom in both solemn and festive ceremonies.

This celebration marks a day in 1865 when enslaved Texans learned they’d be free—two months after Robert E. Lee surrendered and ended the Civil War and two and a half years after President Abraham Lincoln issued the Emancipation Proclamation. Initially a uniquely Texan observance, Juneteenth has now been recognized in some form in every corner of the country.

There are many ways to teach students about this celebration. Lessons about Juneteenth need to recognize the challenges those who fight injustice have always faced, but they shouldn’t be marked only by the tragedy of enslavement. Students, particularly Black students, can find empowerment in the jubilant celebrations of culture, activism and the humanity of a people.

Although the truth had been hidden from them—and they continued to face threats of continued oppression, violence and death—a year after they learned of their freedom, formerly enslaved people resiliently rallied around that date and made the celebration an annual ritual. Early Juneteenth observances included a search for lost family members and an opportunity to uplift each other as they moved through hostile environments.

With this knowledge, students can also identify ways the descendants of the enslaved recapture and honor the cultures, customs and practices lost through slavery. 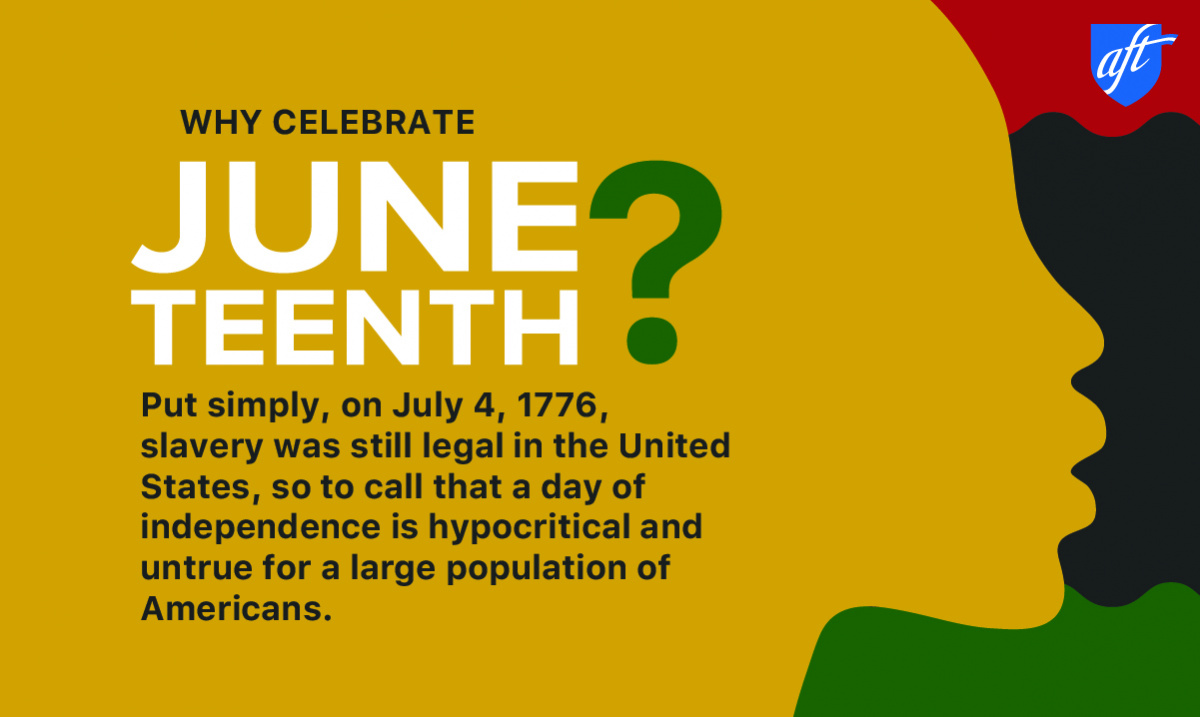 That’s why Juneteenth is more than an observance of freedom. It’s also a time to share the experiences of those who fought—literally and figuratively—to seek true freedom for future generations. It’s important that we don’t whitewash this history.

A common mistake among those who teach the history of American slavery is to center the U.S. government’s role in granting freedom while also placing the onus to navigate through a racist society solely on the formerly enslaved.

Perhaps many center Lincoln in this history because we tend to think of the Emancipation Proclamation, instead of the 13th Amendment, as ending slavery. Our 2018 Teaching Hard History report found that 59 percent of high school students couldn’t correctly identify the latter as the legal end to slavery in the United States.

But it’s important for students to know that enslaved people didn’t willfully accept enslavement or wait for others to free them. They resisted often and consistently. While rare, violent rebellions did occur. Some people successfully escaped enslavement. And everyday acts of resistance, such as breaking tools or pretending to be ill were other ways enslaved people asserted their humanity.

While it certainly encouraged enslaved people to liberate themselves (letting them know they wouldn’t be re-enslaved if they escaped behind Union lines), the Emancipation Proclamation didn’t end U.S. slavery because it didn't apply to Union states. January 31, 1865 marks the day the 13th Amendment—which officially abolished slavery in the United States—was passed in Congress. Students need to know that there were people enslaved in Delaware until December 6, 1865, the day the 13th Amendment was finally ratified.

Juneteenth offers an opportunity to talk to students about this complex history. When you do, you can also talk about the progress and opposing forces that continue to threaten all of these milestones, even though they’re protected by the Constitution of the United States. 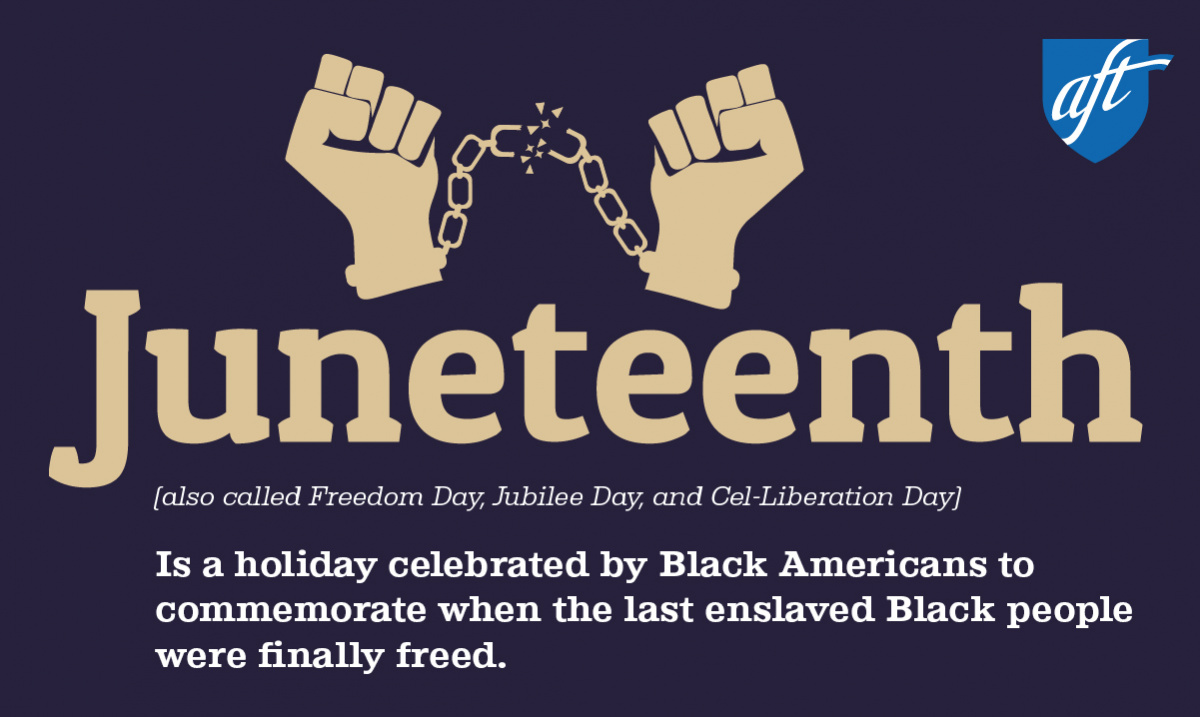 American history has often been reduced to a simple story of continuous progress. In this context, the Emancipation Proclamation represents an important turning point—the country coming to its senses and setting the course for concrete steps toward true equality.

But it’s important for students to know that the announcement—and the celebration afterward—was short-lived and riddled with setbacks, including violence. For example, some enslavers intentionally waited until the harvest before they announced that the enslaved were freed.

And some people taking advantage of their freedom were met with terror or even death. Newly freed people didn’t have protection until September 1865 with the creation of the Freedmen’s Bureau, and even those efforts were often thwarted during Reconstruction.

As TT Associate Editor Julia Delacroix points out, “Students tend to think of the fight for civil rights as though there has always been a set list of hurdles to be overcome—slavery, then racial terror, then segregation, then disenfranchisement, then mass incarceration.”

But we know that “racism takes the shape of whatever will hold it.” Barriers to freedom weren’t predestined, but they do confirm that there has always been a force to maintain racial hierarchy by pushing back against change.

In other words, with each attempt to bring justice and equality to all people, there is often a quick and fierce response. With each victory, there is yet another dueling force to conquer. The announcement of emancipation was no exception, and Juneteenth is a perfect opening to invite students to think about the “story of America” they often hear. 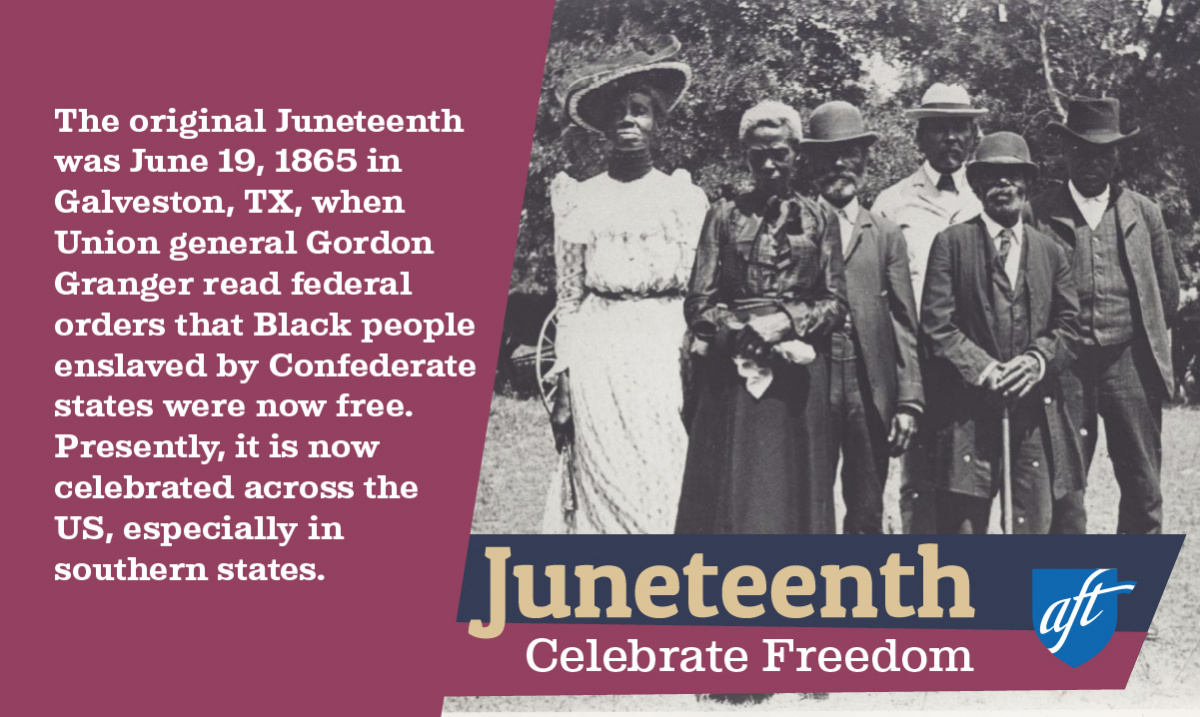 It’s not too challenging to ask students to consider what Juneteenth tells us about our ideas about the United States. After all, another holiday—July Fourth—is in the shadow of Juneteenth. It’s a time when Americans are encouraged to rejoice in the nation’s independence...and freedom.

Students might recognize a paradox with July Fourth celebrations. They might question how a country could have touted the idea of freedom and liberty for all while also oppressing and treating an entire group of people as property. Those celebrations of independence went on for 89 years before the United States abolished slavery.

Abolitionist Frederick Douglass acknowledged this as “inhuman mockery and sacrilegious irony” during his July 5, 1852 speech in Rochester, New York.

“What, to the American slave, is your 4th of July? I answer: a day that reveals to him, more than all other days in the year, the gross injustice and cruelty to which he is the constant victim. To him, your celebration is a sham; your boasted liberty, an unholy license; your national greatness, swelling vanity; your sounds of rejoicing are empty and heartless; your denunciations of tyrants, brass fronted impudence; your shouts of liberty and equality, hollow mockery; your prayers and hymns, your sermons and thanksgivings, with all your religious parade, and solemnity, are, to him, mere bombast, fraud, deception, impiety, and hypocrisy—a thin veil to cover up crimes which would disgrace a nation of savages. There is not a nation on the earth guilty of practices, more shocking and bloody, than are the people of these United States, at this very hour…”

Read more about this speech here

The irony hasn’t been lost on African Americans, who saw that true freedom included navigating society with social, political and economic power. Yet other Americans—those with and without power—fought actively to deny them those rights. For years this paradox dampened the enthusiasm to celebrate, and Juneteenth was not observed for several decades between WWII and the end of the civil rights movement.

The holiday wasn’t revived until the end of Martin Luther King’s Poor People’s campaign, which fell short of its ambitions after King was assassinated. Campaign organizers and protesters made their way to the National Mall in Washington, D.C., where, for more than a month, they visited federal offices to demand economic justice.  The campaign came to an end by late June, but not before recognizing June 19 as Solidarity Day.

William Wiggins Jr., professor emeritus of folklore at Indiana University and author of Jubilation: African-American Celebrations in the Southeast, told Smithsonian Magazine: “It was late June and there were people from all different states in that village for that summer, so they had a group from Texas and someone said, ‘Why don’t we have a Juneteenth celebration,’ which again is a way to address poverty and freedom and harkening back to our past.”

The organizers understood the significance of that date and would bring Juneteenth back to their respective communities in the following years. This, too, is an important part of the history of the holiday for students to understand.

Proponents of Juneteenth argue that it should be an officially recognized national holiday, not only as a way for the United States to acknowledge this vital history, but also to celebrate the values it lauds on paper. Texas officially declared June 19 an official holiday in 1980. And today, 40 other states and Washington, D.C., have adopted the holiday. Yet it’s amazing that this milestone in history isn’t officially recognized on a national level.

Knowledge about these dates and the celebration of them give students the steps to advocate for narratives and experiences that have been erased or forgotten. It also empowers them to connect with their own communities and to become advocates in a diverse democracy.

Reprintedwith permission of Teaching Tolerance, a project of the Southern Poverty Law Center.

I think it's great that we are standing together on this holiday. i wish that we will all get alone life is to short to keep fighting with each other.