Shirley Chisholm and Driving Change in the US Congress

Facing History and Ourselves discuss changemakers like Shirley Chisholm and how the changing makeup of the US congress matters.

In 1968, Brooklyn educator and state legislator Shirley Chisholm made history as the first black woman elected to Congress. While neither the first woman nor the first African American to serve in Congress, “unbought and unbossed” Chisholm boldly challenged the status quo and later became the first woman to seek a major party’s presidential nomination. She sparked inspiration for minorities and women to pursue inclusion in public service when she declared, “If they don't give you a seat at the table, bring in a folding chair."

100 years after American women gained the right to vote with the Nineteenth Amendment and 50 years after Shirley Chisholm was sworn into Congress, the 116th Congress is the most diverse federal legislative body in American history. The Congress was sworn in by Nancy Pelosi, who in 2007 became the first female Speaker of the House. She is now serving in this capacity for a second time.

The careers of Shirley Chisholm, Nancy Pelosi, and others now serving in Congress build on a long history of former outsiders seeking access to national political power. During the Reconstruction era that followed the Civil War, the first African Americans were elected to Congress, such as Senator Hiram Revels and Rep. Joseph Rainey, holding seats of former slaveholders. Before Rep. Chisholm, several women served in Congress. Some of these female legislators took up seats first held by their husbands; others ran for office in regular elections, like Rep. Jeannette Rankin, the first woman elected to Congress, in 1916, or Senator Margaret Chase Smith, elected in 1948.

At this political moment of greater diversity in Congress, students can learn about Shirley Chisholm’s groundbreaking career and connect her story to the evolving demographics of today’s Congress. Teachers can guide students to examine the demographics of the 116th Congress, explore the meaning of representation, and discuss how diverse representation may impact American politics. 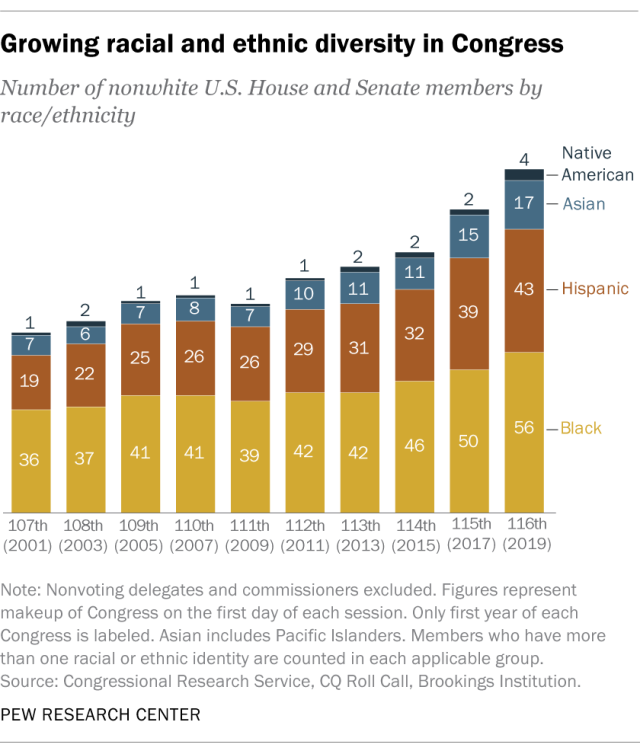 Who Was Shirley Chisholm and What Did She Represent?

View the short video, Before Obama And Maxine Waters There Was Shirley Chisholm (3:48) from The Root.

Discuss how Shirley Chisholm was a groundbreaking politician. Suggested questions include:

Who Has a Seat at the Table in the US Congress Today?

Share The Changing Face of Congress in 6 Charts from Pew Research Center with students. After students review the charts, ask them to consider:

(Note: To see an overview by race and gender in Congress during the twentieth century, refer to pages 34–37 of Vital Statistics Members of Congress by the Brookings Institution. Students can compare diversity between the 116th Congress and the 91st Congress, when Shirley Chisholm was inducted.)

Why Does Representation Matter?

In January 2019, Ayanna Pressley became the first African American woman to represent the state of Massachusetts in Congress and was able to fulfill her dream of working out of Shirley Chisholm’s old office. Pressley said, “It seems like change is on the way . . . People who feel seen and heard for the first time in their lives, a stakehold in democracy and a promise for our future . . . That is the real victory.”

Facing History and Ourselves

Facing History and Ourselvesis a nonprofit international educational and professional development organization.Its mission is to engage students of diverse backgrounds in an examination of racism, prejudice and antisemitism in order to promote the development of a more humane and informed citizenry.