Three Observations to Help the iGeneration Navigate the Internet 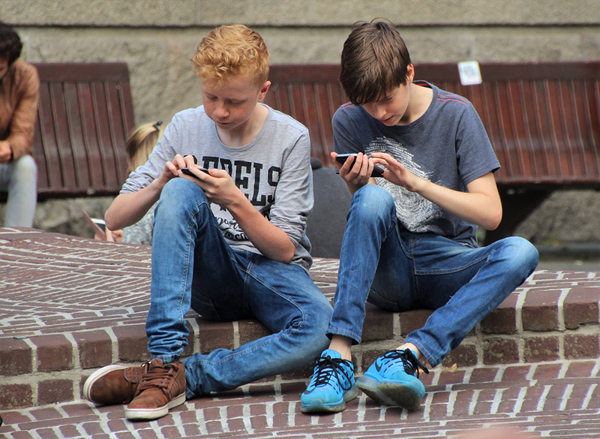 Adults constantly complain about screen time and their kiddos’ phone obsession;  they also like to talk about how teens are incapable of relationships IRL (in real life, for all of you who are, in your own way, disconnected). My husband quit Facebook because it makes him talk to the computer and simultaneously raises his blood pressure. I’m listening to Zadie Smith’s collection of essays, Feel Free, which relays a story about a friend who thinks that the next “big thing” will be to go off the grid completely—an act of rebellion against the mindless, dull faces backlit by the glow of their devices. Despite the negative impression so many have about technology, phones are the No. 1 bargaining tool adults use to keep their children in line, including threats such as, “If your grades don’t go up, you are losing your phone,” or in my case, “You are going to play Minecraft with your brother. Now go into his world and hang out with him.” To say that we are a society conflicted by our love/hate relationship with technology seems too obvious to discuss, but I think it bears fleshing out. There are three concerns I have with the either/or dichotomy.

Too much of anything, even a good thing, is bad

To be clear, there have to be limits. If you eat too many carrots, for goodness sake, you’ll turn orange. You can even get “water intoxication” from constant overhydration. You get my point, right? The problem here is defining what is “too much.” Healthychildren.org provides guidelines within its “Kids & Tech: Tips for Parents in the Digital Age,” but most adults (or at least the ones willing to admit it) have allowed a child under 2 screen time, even if it is looking on as big brother watches “Thomas the Tank Engine.” I’m not being dismissive, but I do know that members of my generation, growing up in the 1990s, frequently watched television from the minute we got home from school until we went to bed. I’ve watched my fair share of “Dukes of Hazzard,” and though I’m rather appalled by the ridiculous stereotyping, I came out relatively unscathed. As the adults, and as those who know our children and students best, we can make good decisions without being legalistic and judgey to those whose rules might not be the same as ours.

Kiddos need mentoring at least as much as monitoring

I’m actually quite a defender of screen time, if you want to know the truth. I think it depends what the child is doing. My son codes pretty much every afternoon, and I see that as very different from vegging out. He also watches tutorials, and he makes his own. He recently taught himself how to “cube” from watching videos. I guess I just can’t see how that is not a good use of time.

On the other hand, my daughter, who is 13, watches television shows, mostly Netflix. I recently had an in-depth conversation with her regarding the controversial “13 Reasons Why” series. From talking to my students, I know that parents were banning their children from watching it, but I also know that most of them watched it anyway. That’s why kiddos need mentoring over just monitoring. Share My Lesson has several resources that can help teachers and parents. This resource treats “13 Reasons Why” as a drama, a text to be read and studied, while this one has vocabulary to go with the novel.

My daughter and I had some awkward conversations, mostly driving on the way to school so that we didn’t have to look at each other, but I’m very happy that we did. Sadly, parents who just think they can monitor miss the chance to have these strange, stilted, yet essential conversations with their children. You can read more about mentoring vs. monitoring in Devorah Heitner’s Screenwise: Helping Kids Thrive (and Survive) in Their Digital World.

Jean Twenge, author of iGen: Why Today’s Super-Connected Kids are Growing Up Less Rebellious, More Tolerant, Less Happy—and Completely Unprepared for Adulthood, provides valuable information about those who were born between 1995 and 2012. I recommend her book highly, but this article she wrote for Quartz at Work, is an excellent summary by the author herself. The fact is, this generation can’t comprehend a world without extreme connectivity any more than most of us can without phones, cars and fast food, so asking them to do so is not only impossible, but ridiculous too. Additionally, by belittling a part of their world, we seem like dinosaurs who will never “get it.”

As tempting as it is to criticize, the only way we are going to build relationships with our students is to inhabit the world they live in. If we are more interested in banning, monitoring, and threatening than mentoring, we are going to get results that occur anytime things are banned and monitored—a sneaky, silent rebellion. Their world, the connected world, is scary, and I don’t want my students or children to feel that they must navigate it without a guide, so I will always err on the side of learning what interests students and immersing myself in it so that I can shine a light on what is good, and steer them from what might hurt them.

Amber has enjoyed a wide variety of teaching opportunities--from 6th grade remediation, to college courses, to education workshops on Differentiation, Danielson’s Domains, and Project Based Learning.

Amber has enjoyed a wide variety of teaching opportunities--from 6th grade remediation, to college courses, to education workshops on Differentiation, Danielson’s Domains, and Project Based Learning. No matter which level Amber is teaching, the goal is always the same: engage students to take charge of their own learning.

Amber’s blogs and articles have appeared in Middleweb, ShareMyLesson, Getting Smart, ASCD’s “Ideas From the Field,” Mom’s Rising, The EdVocate, AMLE magazine, as well as New York Teacher. She has served as a co-moderator for #WhatIsSchool education chat, as well as initiating the first #NYEdVoice Twitter chat as a New York Educator’s Voice Fellow. Amber has appeared as a guest on BAM! Radio Network to discuss the benefits of Project Based Learning, as well as webcasts for AMLE on the importance of teaching speaking and listening skills, and how to use artifacts to improve teacher evaluation in APPRs.

Amber was chosen from a nationwide search as one of a handful of panelist for Fordham’s “Evaluating the Content and Quality of Next Generation Assessments” to evaluate how state assessments compare in their ability to assess Common Core Standards. She’s also served as a School Review Team member, offering her observations and expertise, particularly in the area of Project Based Learning.

Amber is an active AFT member as a ShareMyLesson Ambassador and participant in the Resource and Materials Development at the Summer Educators Academy. Amber also is a featured contributor for the AFT blog, “Classroom Voices.” She serves as the President for her local, Frontier Central Teachers Association.

To learn more about her work, check out Amber Chandler's website here.