Why Don’t They Just Talk to Each Other?: Technological vs. IRL Conversations 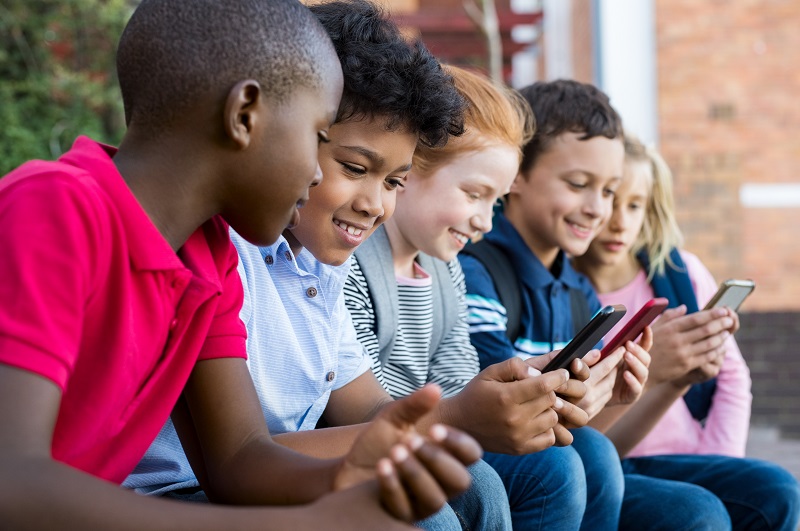 Just look at them. Always on their phones. They don’t even know how to have a conversation anymore. They will text each other even when they’re in the same room. Why don’t they just talk to each other? Have you heard teachers and parents muttering these types of comments about today’s students?

Sometimes, this is the reality of dealing with teenagers; but even as adults, we too are guilty of this tech-obsessed behavior.  Is there a way we all can become better communicators and connect more in our daily interactions?

First, let me be clear that there’s a whole lot more to this conversation than might meet the eye. I’m definitely not on the side of the “there’s too much technology” or “students are losing all their social skills” rhetoric. I have a paperless classroom, and I continually marvel at my 10-year-old son’s ability to research, watch tutorials, and learn how to do cool things like solve a cube—all on his phone. He understands how to have a conversation (albeit in the comments section of a YouTuber’s channel). And my 13-year-old daughter built a babysitting services website with multiple technological means of reaching her objectives.  Actually, I am a proponent of connecting with students digitally and allowing them to work virtually; in fact, my most successful student conferencing has happened inside a Google Doc, where yes, I was typing on the document of a student who was only three feet away from me. On the contrary, I think that when educators ignore students’ way of doing work or dismiss it, we are alienating students from ever inviting us into their world.

With all that being said, however, I have noticed a reticence among teenagers to speak to each other IRL (in real life). I think it is worthwhile to note that though we typically think teens are impetuous and thoughtless in regard to what they post, the opposite is true as well. Texting and posting pictures both allow students to rehearse ahead of time what they are “putting out there” about themselves. I know that some students pay no attention, but in my experience, teens agonize over how to say something and which pre-selected and posed picture to post. The problem with IRL conversation is that it is fast, unrehearsed and open to judgment. There are ways we can improve our students’ conversational skills, but you might be surprised by how overtly we must explain the way to successfully communicate (read more in 3 Tips for Teaching Speaking and Listening Skills in the Association for Middle Level Education’s magazine).

I’ve written about Rotating Chairs before, and you can see examples for Stargirl, The Outsiders, Zootopia (and check out my SML blog and lesson plan) and The Giver to get a feel for the types of conversations that can be sparked. One aspect I’ve failed to discuss previously is the overt instruction of how students should respond. Lately, I’ve been using ADDS to help students remember what to do: 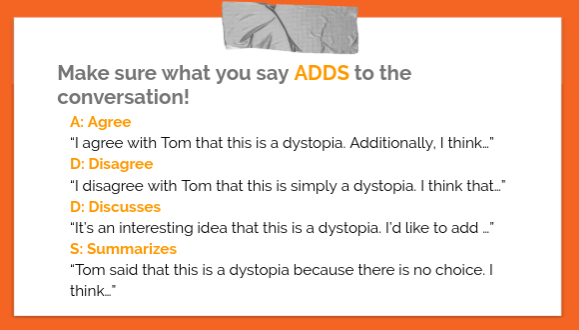 This graphic is a part of the directions I use for Fishbowl Discussions, another great way to get kiddos talking.

Last week, we did chapters 1-7 of The Outsiders using Rotating Chair. This is the third time I’ve used this discussion strategy this year, and there are two stories worth sharing here about the power of conversation. The first is about a young man I’ll call Chad. In our last Rotating Chair, students were required to contribute five times over a three-day conversation. Each conversation is almost 40 minutes long, so this is not a hefty ask. However, he only managed to make two comments, leaving him with a 40 as a quiz grade. I offered him the opportunity to get the other 60 points later, in a future Rotating Chair. Over the  next several weeks, I made sure to initiate a conversation with him every day. I’d ask him to contribute to a casual conversation with other students: “Hey, Chad, what did you do this weekend?” Slowly but surely, he was loosening up. This past week, the Rotating Chair requirement was only two comments in two days. Chad contributed twice on the first day, and he approached me and asked, “Can I get get those other 60 points tomorrow if I talk three more times?” I was beside myself with excitement, and I was thrilled that Chad had finally gained the skills and confidence to participate. Instead of counting him out, more conversation practice was the key to his future ability to connect with others.

The second story is about a student who loves to talk, yet has a very difficult time paying attention. She struggled at first with the notion that she had to respond to the students before her because it required active listening skills she did not have. However, this last week, having further practiced these skills, it was clear she was enjoying herself. Normally, she is the student who is dying for me to say, “OK, you only have a few minutes left. You can chat with one another.” This week though, when I said that, she piped up, “We still have three minutes. Do we have to stop now?”

These two students represent two “types” who often turn up in our classrooms, but by overtly helping them learn strategies like ADDS, we can bring some balance to screen time vs. IRL conversation.

Amber has enjoyed a wide variety of teaching opportunities--from 6th grade remediation, to college courses, to education workshops on Differentiation, Danielson’s Domains, and Project Based Learning.

Amber has enjoyed a wide variety of teaching opportunities--from 6th grade remediation, to college courses, to education workshops on Differentiation, Danielson’s Domains, and Project Based Learning. No matter which level Amber is teaching, the goal is always the same: engage students to take charge of their own learning.

Amber’s blogs and articles have appeared in Middleweb, ShareMyLesson, Getting Smart, ASCD’s “Ideas From the Field,” Mom’s Rising, The EdVocate, AMLE magazine, as well as New York Teacher. She has served as a co-moderator for #WhatIsSchool education chat, as well as initiating the first #NYEdVoice Twitter chat as a New York Educator’s Voice Fellow. Amber has appeared as a guest on BAM! Radio Network to discuss the benefits of Project Based Learning, as well as webcasts for AMLE on the importance of teaching speaking and listening skills, and how to use artifacts to improve teacher evaluation in APPRs.

Amber was chosen from a nationwide search as one of a handful of panelist for Fordham’s “Evaluating the Content and Quality of Next Generation Assessments” to evaluate how state assessments compare in their ability to assess Common Core Standards. She’s also served as a School Review Team member, offering her observations and expertise, particularly in the area of Project Based Learning.

Amber is an active AFT member as a ShareMyLesson Ambassador and participant in the Resource and Materials Development at the Summer Educators Academy. Amber also is a featured contributor for the AFT blog, “Classroom Voices.” She serves as the President for her local, Frontier Central Teachers Association.

To learn more about her work, check out Amber Chandler's website here.