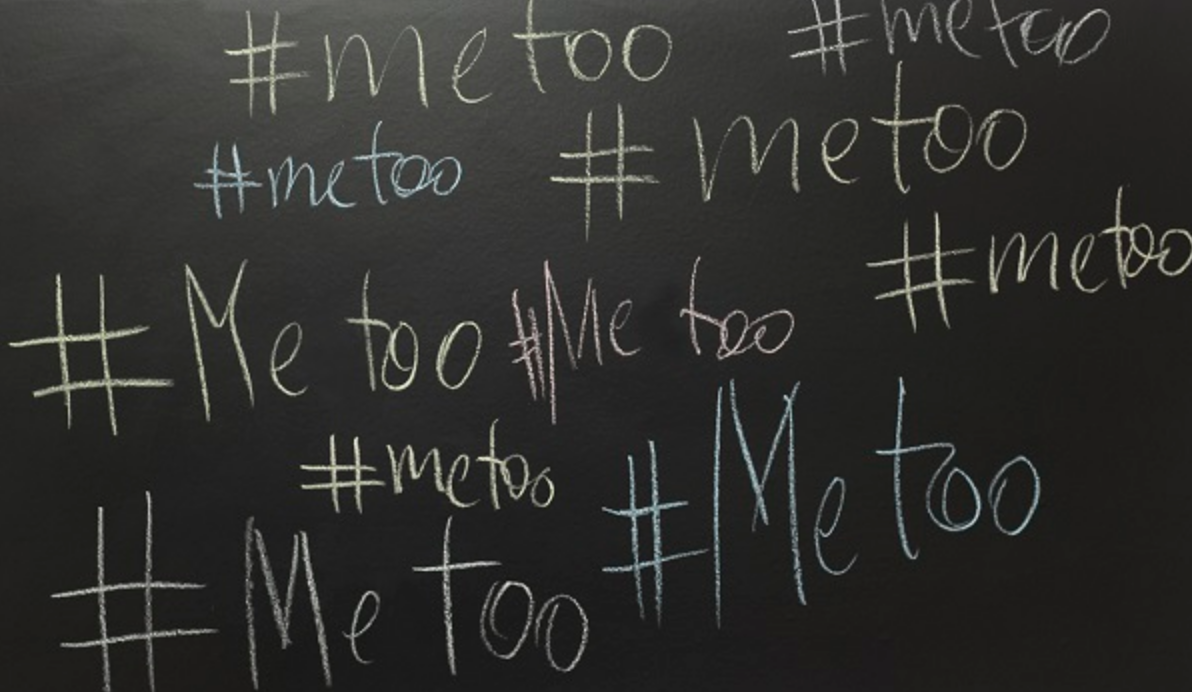 The trauma that survivors of sexual assault experience doesn’t end with the attack. There’s the aftermath. How the authorities will or won’t handle it. The self-loathing for “letting” yourself get in that situation. And, if you tell someone about it, the fear that you won’t be believed. That you’ll be blamed. That it will define you. That you’ll be called a slut and your attacker will be cheered.

We witnessed the emergence of a national movement upon the arrest of Hollywood megaproducer and serial sexual assaulter Harvey Weinstein, and the outing of a number of high-profile men who have abused their privilege and positions of authority to prey on women and girls. With the rise of the #MeToo and #TimesUp movements, it seemed that perhaps survivors had reclaimed a little bit of power as we finally found comfort and support in one another. That the silence and shame so many of us retreated into during the last century might truly be a relic of the past, and that going forward, our girls would be believed, embraced and protected from the predations of men who fail to recognize and respect our full humanity.

The experience of Dr. Christine Blasey Ford, who alleges that Judge Brett Kavanaugh sexually assaulted her when they were in high school, confirms survivors’ worst fears of further suffering and abuse.

President Donald Trump attacked her credibility. Senate Majority Leader Mitch McConnell said, “In the very near future, Judge Kavanaugh will be on the United States Supreme Court,” regardless of Dr. Ford’s testimony or any evidence of Kavanaugh’s wrongdoing that may come to light. Nevada Sen. Dean Heller referred to this as a “hiccup” in Kavanaugh’s confirmation.

And Dr. Christine Blasey Ford has received death threats and gone into hiding.

Hideous reactions such as these to credible allegations of sexual assault have led to an outpouring of #WhyIDidntReport testimonials. Some survivors say they didn’t report their abuse because their attacker was well-respected. Some feared it would cause their parents unbearable pain, or unbridled rage. Some figured nothing would happen to their perpetrator — a calculation that, tragically, is all-too-often true. Some simply were too traumatized.

I understand this, because it happened to me. And I finally spoke my truth on Dec. 15, 2014, more than 30 years after the fact, to help stop rape culture on college campuses.

While I was in college, I had an internship in labor relations at an automobile plant in Warren, Ohio. I knew almost no one there, so I did what was familiar: I went to shul. One family invited me over for Shabbat dinner. They also invited a young man. He was nice enough. So, when this “nice Jewish guy” invited me for dinner, I accepted.

A few days later, I went to his apartment. And that’s where it happened. He tried to rape me. I managed to get out after a struggle, but the emotional scarring was deep.

I carried it with me for years and years. The shame and the fear faded but never erased completely as I graduated from college and law school, then became a lawyer, a teacher and a union leader. 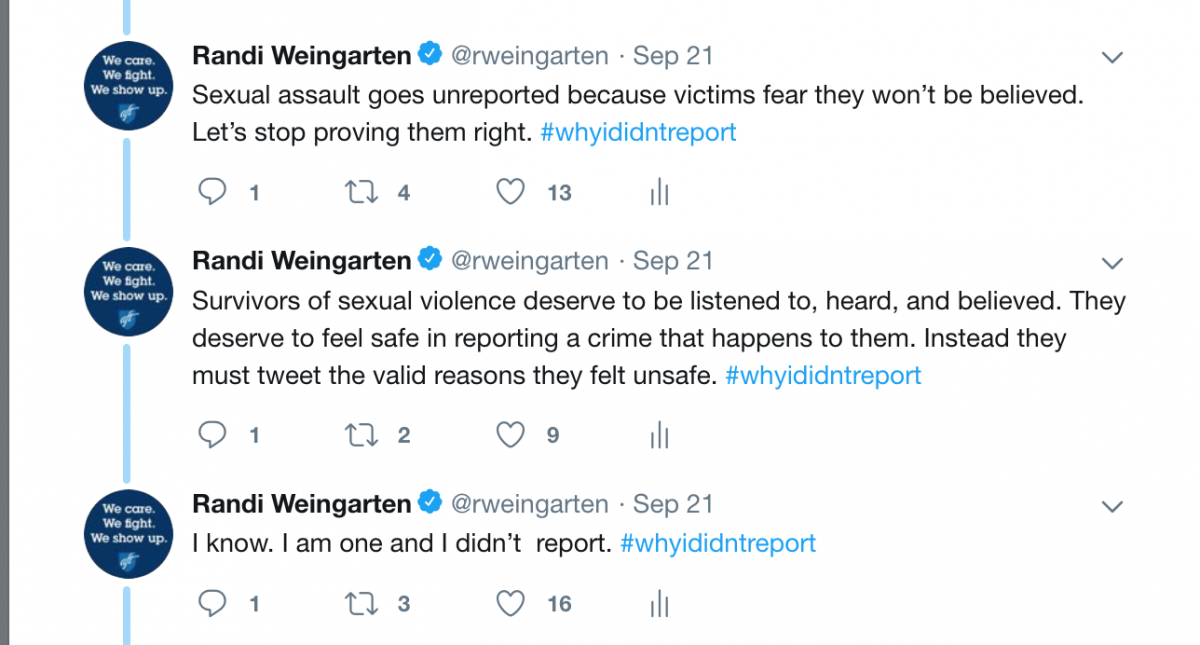 I have been inspired by the courage of people sharing their truth through #MeToo and #WhyIDidntReport. By speaking up and ensuring that perpetrators can’t count on their victims’ silence, these courageous women (and some men) are making the road we walk on. We must bring change not just in policy, but also in our culture.

We all have our own stories to share, and we all must be part of the solution. Here’s my part: As president of the American Federation of Teachers, I represent hundreds of thousands of workers at colleges and universities who can help effect change on campus. I can do something. We can do something.

And we are. At the State University of New York, for instance, where the United University Professions — an affiliate of the AFT — represents workers, the board of trustees released a policy that establishes a “Bill of Rights” for victims of sexual assault. Under this bill, survivors are asked to repeat their stories as few times as possible and can decide whether they want to engage law enforcement without being pressured by college officials. It clearly defines “affirmative consent.” SUNY is creating a best-practice guide for freshman orientation, a clear and confidential reporting protocol, and a campus climate assessment to gauge the prevalence of sexual assault on campus.

The AFT consistently reviews, updates and bolsters our own internal policies to protect the safety and well-being of our staff, affiliates and leaders, and in the past year alone we’ve passed updated resolutions against sexual harassment and to support the development of age-appropriate sexual consent education in schools. We have also worked with our national labor federation, the AFL-CIO, on its Code of Conduct. Our national curriculum-sharing platform, Share My Lesson, hosts free, downloadable K-12 lessons supporting teachers and trainers everywhere on how to address issues of consent, sex education, relationships and undoing a pervasive culture of silence.

The disgusting tweet by President Donald Trump repeating all the myths that have silenced survivors for generations has shocked and provoked an outcry from women and men from all walks of lives — and even some Republican senators. But widespread public condemnation is not enough.

It is time we collectively take real steps toward change, and one of these steps is recognizing that there need to be higher standards for a lifetime appointment to the highest court in the land.

The culture that led President Trump to brag that men “can do anything” to women with impunity, that emboldens him to say that abusive men should “deny, deny, deny and push back on these women,” and the culture that may allow a second man credibly accused of sexual misconduct to sit on the Supreme Court kept me from speaking out for nearly 30 years. As a former high school teacher, as an assault survivor and, frankly, as a human being, I am enraged by people who want to give teenagers who commit sexual assault a pass because of their age. What message does that send to teenage girls? Or to teenage boys?

When Sen. Chuck Grassley callously dismisses the fears and concerns of Dr. Ford, when senior senators and Fox News commentators promulgate the dangerous trope that “boys will be boys,” when we rush forward to confirm to the U.S. Supreme Court a man credibly accused of a very serious crime, we are doubling down on a culture that has contributed to society’s failure to support people who have been sexually assaulted.

This blog post is re-published with permission from AFT Voices. Read the original post. To learn more about AFT's Schoolhouse Voices from