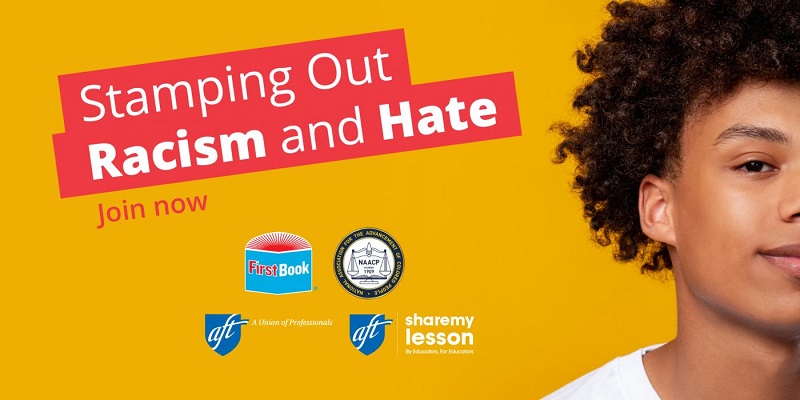 Imagine a world without racism. Now gather up some tools and put in the work to get us there.

Stamping Out Hate. Together.

Imagine a world without racism. Now gather up some tools and put in the work to get us there.

That’s what the AFT is doing with its new campaign, “Stamping Out Racism and Hate.” Launched with partners the NAACP and First Book, the campaign aims to make sure every student has an actively anti-racist, safe and welcoming learning environment, and it will give educators the resources they need to help create it.

While the campaign was announced just in time for Juneteenth—the day we celebrate emancipation from enslavement—it will officially launch in July with a special AFT edition of the book Stamped, by Jason Reynolds and Ibram X. Kendi. A relatable remix of Kendi’s Stamped from the Beginning, this version unpacks Kendi’s treatise on how historic racism has shaped our lives with the trademark humor and familiar language that’s made Reynolds an award-winning author of young adult novels. The book is “not a history book,” Reynolds tells readers. It is “a book that contains history.”

For example: He calls Abraham Lincoln “complicated Abe,” for first refusing to challenge slavery, then eventually issuing the Emancipation Proclamation. He writes about James Brown lyrics and colorism (“I’m Black and I’m Proud”) and Richard Nixon’s coded words like “ghetto,” “urban” and “thugs” that demeaned Black people “without ever actually saying ‘Black people,’” as Reynolds writes. “My mother would call this ‘gettin’ over.’”

“The authors lay out the pervasiveness and insidiousness of racism in our lives, even as the history and legacy of racism often are left out of what we are taught and told,” writes AFT President Randi Weingarten in a note included in the special edition. “Their words have the power to transform the way we look at the world—to deconstruct false narratives, appreciate diversity and differences, and, crucially, recognize and confront our own racist ideas. I wish I had a book like this when I was a young student.”

The AFT will distribute hundreds of copies of Stamped to NAACP youth councils and advisors at their national convention in July. Giveaways will continue throughout the year. Free classroom collections will go out to AFT members, educators and youth mentors during the AFT’s TEACH conference July 6-10.

The campaign will also point to First Book’s Empowering Educators series, a collection of resources that currently includes videos and a guidebook with actionable advice from educators around the country on having effective conversations on race with all students, of all ages.

The campaign is just one way the AFT is tackling racism. It recently launched a community page for educators to share resources and discuss issues on Share My Lesson; has been a leader in pushing voting rights legislation that protects the vote for Black people; has sponsored multiple panel discussions to advance anti-racist policing and education; supported activists in George Floyd Square; promoted Black Lives Matter at School; and passed multiple resolutions protesting police brutality and hair style discrimination (the Crown Act), confronting anti-Black racism, supporting Black Lives Matter and more.

“Now more than ever, we’re reminded that racism and other forms of oppression—antisemitism, Islamophobia, anti-Asian hate, homophobia and other hatred based upon race, religion, sex, creed and color—are long-standing scourges in America, and that as educators, we have a key role in bringing people together and teaching tolerance, overcoming divisions and working toward justice and equality,” says Weingarten. “Stamped provides an insightful look into the history of racism and what steps we can take to overcome racism so that we can become an anti-racist nation. … We’re thrilled to be working with First Book and the NAACP on this important campaign to help stamp out the injustices that are holding us back as a society.”