The Paradox of the Constitution - Blog 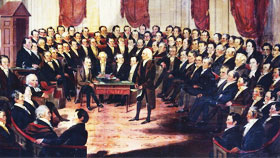 Did police
violate journalists’ constitutional rights to assemble, speak and make
demands of those in power in Ferguson, Mo., following the shooting
death of Michael Brown?

Does “forcing” states to comply with the implementation and
assessment of the Common Core State Standards because vital monies are
attached constitute unlawful coercion by President Obama, and thus a
violation of constitutional rights?

Is Hobby Lobby protected by constitutional rights to opt out of
providing birth control options for women as a part of its healthcare
coverage?

These events fill Twitter feeds and Facebook posts, prompt
individuals nationwide to write op-eds and fuel debates on the nightly
news. In each case, “constitutional rights” are called in to question,
which underscores the need for students to both celebrate and learn
from Constitution Day on Sept. 17.

Interestingly, as a part of Robert Byrd’s Consolidated Appropriations
Act of Fiscal Year 2005, Congress passed a provision requiring every
school and college that receives federal money to teach about the
Constitution on Sept. 17 each year, the day it was originally adopted
in 1787. Some would argue that this very provision—an intrusion by the
federal government—is unconstitutional.

When the Constitution is invoked, a strange paradox frequently emerges
as individuals on both sides of the argument use the document as
evidence to back their own position. Though wrought with frustration
and confusion, events such as those mentioned above only highlight the
need for a thorough study of this primary source that is at the center
of both sides’ arguments.

As teachers prepare to teach about the Constitution, there is
some concern that their curriculum does not have this lesson
incorporated, and that its inclusion would disrupt the flow being
established in the first few weeks of school. The subject matter,
however, is worthwhile, and teachers have a treasure trove of “How does
this relate to your own life?” conversations with students ahead of
them, which will build community and rapport.

Share My Lesson’s Constitution
Day resources are extensive. One of the coolest lessons I
found is for grades 1 and 2. For whatever reason (probably because I
have only taught on the secondary level), I couldn’t imagine how a
worthwhile conversation and learning experience about the Constitution
could take place with students this young. My son, Oliver, is in the
first grade, and unless something is Star Wars-related, it doesn’t
necessarily hold his attention for long. And, though we have many “good
vs. evil” and “the dark side” conversations, I still wasn’t convinced
that philosophically he could absorb the material about the
Constitution.

However, Share My Lesson’s content partner, the
Center for Civic Education, has an engaging and
age-appropriate lesson called “Constitution
Day Rap.” Students use their artistic talents to create a
13-star flag, while tapping into their intrinsic motivation as they
perform the rap and have fun connecting with their peers—all
developmentally necessary for fruitful learning. The teacher also has
access to “Fun Facts” that can be incorporated throughout the lesson.
And, as for my son, he’d like the art and music, as well as the trivia
gleaned from the fun facts.”

Another content partner, the National
Constitution Center, provides a current video lesson that
addresses the
legislative branch while also exploring important historic
sites. This resource is designed for grades 5-9, although I expect that
there is some content that also would be appropriate for older high
school students. Perhaps it could be used as a review tool or as part
of a special education plan that requires multiple methods of delivery
for student success.

Without fail, the Constitution is going to be used in
persuasive arguments for both sides of controversial issues, and it is
a reasonable expectation that schools will instruct and guide students
in pursuit of their own ideals. Ironically, the framers of the
Constitution, who were deliberate to the point of contention at times,
intentionally left matters of education out of the document.

We don’t tell students what to think, particularly about
politics, but instead, we teach them how to think critically. As they
read about the National Rifle Association and gun control; abuses of
presidential power; United Nations arms trade treaties; Environmental
Protection Act regulations; and National Security Agency phone
surveillance programs, students need to think critically.

No matter which side you are “for” and which you are
“against,” help students who will be our leaders in the coming decades.
One way to do this is to help them become familiar with the U.S.
Constitution—and the rights it provides.