Reading, Books and Empathy with Actress and Author Sheetal Sheth

Breaking Down Boundaries with Sheetal Sheth

Sheetal Sheth is an award-winning actress, author, and activist. Her choices as an artist speak to her willingness to take chances and break down spoken and unspoken boundaries. At Re-Imagining Migration, we met Sheetal on the tour for her first children’s book, Always Anjaii. She joined our educational leaders’ seminar in July 2020 for a reading and a book talk. Sheth’s second children’s book has just been released, Bravo Anjali. Our Executive Director, Adam Strom, had the opportunity to speak, quite virtually and very socially distanced, with Sheetal about the book, literature, and the importance of representation.

Adam S.: Sheetal, thanks for taking the time to speak with us. I want to start our conversation with an apology and a question. We’ve spoken several times, and yet, when I introduced you at our summer seminar, I mispronounced your name. The irony, when the importance of a name is central to the story of your first book, was not lost on me. You were very generous and let me off the hook, but it strikes me that we shouldn’t just gloss moments like that over. I have my own assumptions about what it feels like when someone mispronounces your name, but with a name like Adam, it happens so rarely to me in this country. What goes through your head in a moment like that?

Sheetal: My initial instinct is to always correct as I do know that people want to get it right. And don’t feel bad- it happens and your heart is in the right place. But I also try to read the moment and the room and think about how the best way to do it is. If I don’t do it in the moment, I may do it privately so as not to put anyone on the spot. A lot of the time, if there’s a chance to, before I do an interview or a public event, I will preemptively ask the person if they are comfortable saying my name so we can practice ahead of time. If I’m with or in front of children, I will likely always correct so they can see that it’s ok to do so and model for themselves.

Adam S: Thanks, that’s helpful. Let’s turn to your two books. I’ve really come to like Anjali. Both books capture some of the pressure young people, and really all of us, face from the people around us and how that pressure impacts how we think and act. In the first book, it was the dominant society and her white peers, in this book, a friend plays a similar role. What attracts you to these kinds of stories?

Sheetal: I want to tell stories that dig a little deeper. That are entertaining and fun but allow for real talk about real things. I firmly believe that there is no such thing as ‘too young’ to have certain conversations. We can talk to our kids about anything within the right context and with appropriate words. AND I know they want to have these conversations. They crave them, in fact. Our kids are getting gunned down in schools for goodness sake…we can have these conversations.

Adam S: Many educators have come to think about literature through a frame described by Dr. Rudine Sims Bishop. Dr. Sims Bishop explained that “Books are sometimes windows, offering views of worlds that may be real or imagined, familiar or strange. These windows are also sliding glass doors, and readers have only to walk through in imagination to become part of whatever world has been created or recreated by the author. When lighting conditions are just right, however, a window can also be a mirror. Literature transforms human experience and reflects it back to us, and in that reflection, we can see our own lives and experiences as part of a larger human experience. Reading, then, becomes a means of self-affirmation, and readers often seek their mirrors in books.” Do you remember particular books from your own childhood that served as either windows or mirrors?

Sheetal: I’ve always been drawn to books that had fundamental questions explored in them. Books like Catcher in the Rye and To Kill A Mockingbird. I remember reading so many mythology books- from all around the world. I was captivated by them. And I had an early connection and interest in Shakespeare. I have an anthology of his collected works and I still go to it and re-read often. When I got older, I found Arundhati Roy, Jhumpa Lahiri, and Ayad Akhtar. All authors I so admire and have become pillars in their own right. One of my all time favorites is Shantaram by Gregory David Roberts. Lately, I have been reading more poetry.

Adam S: I just started looking for more poetry, I tend to go back to the same poets again and again. I’m always looking for new voices. Some day we should compare notes. I also know that you are a parent. What do you look for when you choose books to read to your family?

Sheetal: I look for books that bring in worlds, narratives, and images that expand my kids’ experiences. They get enough of the other stuff in daily life and media. I love reading a book with them that allows for questions and conversations. Could be about the mundane or extraordinary. And the best is when we look up answers and information together. I love learning with them. 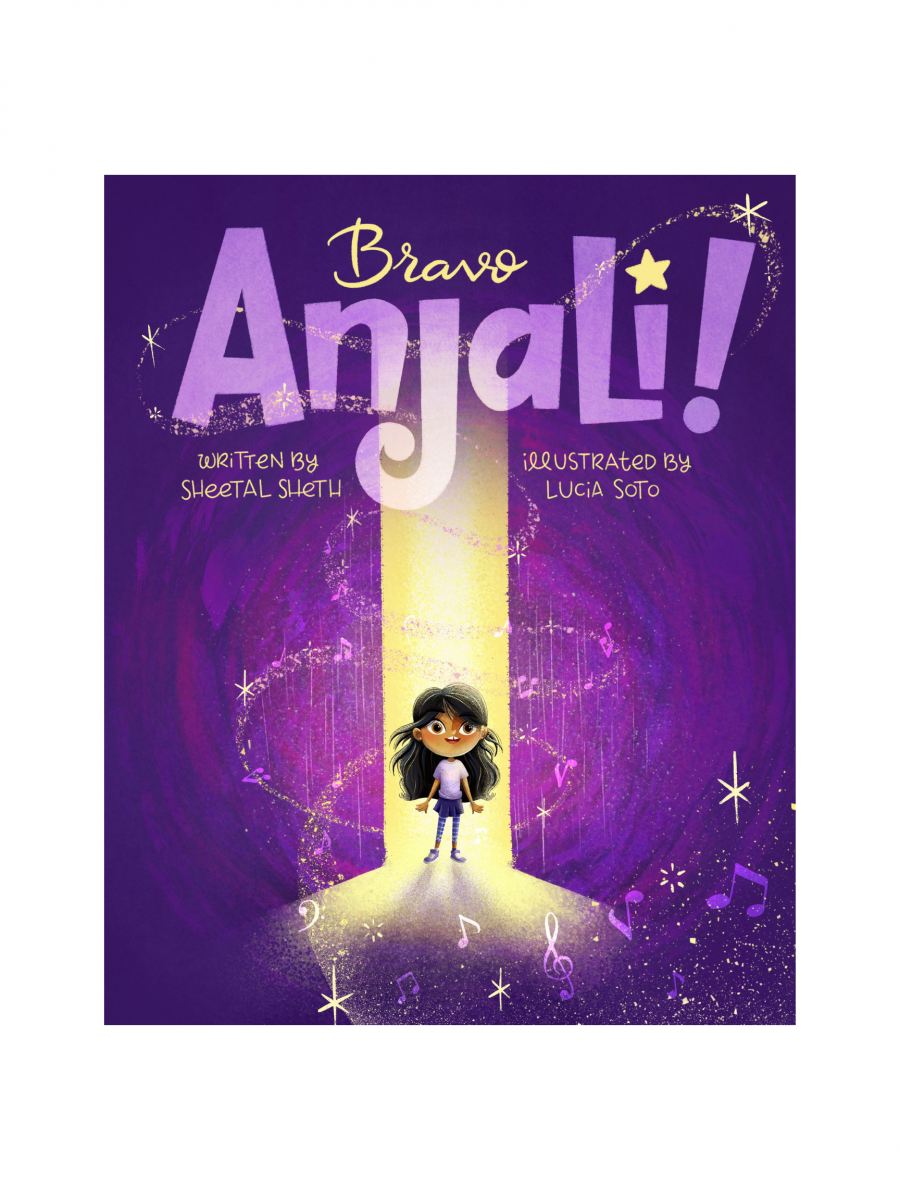 Adam S: It’s so much fun to learn with your children. Now, as my children are older, I find myself learning from them all of the time. As you think about yourself, the daughter of immigrants, maybe Anjali’s age or just a bit older, what do you wish your teachers knew about you, your strengths, and the challenges you were facing?

Sheetal: Teachers/educators are my favorite and have some of the hardest jobs out there. I know they are juggling a ton and forced to be everything to children at times. I have nothing but deep respect for someone who chooses this path. I am going to share a story. When I was young, we went to India a lot. Every couple of years and we would stay for months at a time. Sometimes so long that we missed the first month of school. When I’d return, I’d be so accustomed and fluent in Gujarati, that my English wasn’t great. Even though English was my first language, it took a beat for me to get back into my groove. But my teachers never said anything- they understood and helped me. My husband on the other hand grew up similarly. But when he spoke Gujarati in class, his teacher called his mom and made it a problem. So much so that my in-laws stopped speaking Gujarati as much at home. They had been made to feel that self-conscious and were worried it would affect their kids’ grades. To this day, my husband doesn’t speak Gujarati fluently. His family was shamed and he lost out.

Adam S. That’s powerful. Thanks for sharing that. It is a reminder of just how much power educators have to shape the ways kids, and their family’s see themselves.

I know that children’s literature, particularly diverse books, are very important to you. I’m going to ask you to dream for a minute. How do you think the world would be different if young people had access to more diverse literature? What do you think people would know that they don’t know? What might they understand?

Sheetal: Ah, well the world would be such a kinder and more empathetic place. I dream of bookstores that don’t ‘categorize’ and ‘other’ books with heroes of color in them. I dream of an industry that structurally allows for people of color to have as many opportunities as their white counterparts. I dream of an industry where there aren’t more books about animals than there are about kids of color. I dream of the day when we can replace many of the ‘classic must-reads’ in school with more own voices’ texts that are better and more accurate. I dream of the day when all this is so normal we don’t have to have these conversations anymore and we can just enjoy a good book. And there are stacks of incredible ones all around us. For anyone to pick up.

Adam: I love that. Let’s work to get there.

Sheetal Sheth is an acclaimed actress and producer known for her provocative performances in a wide range of memorable roles on film and television. She has starred in over 20 feature films and many TV shows and is a favorite in the independent film world, having won five best actress awards on the film festival circuit. She has earned a loyal, international following. Sheetal began her career at a time when few South Asians were making their living as actors. Despite being told she'd have to change her name to work, her successful career has trail-blazed paths for other women of color across media. Sheth supports marginalized communities not only through her own pioneering work as an actor, but by also appearing at workshops and panels and speaking directly to issues facing those communities. She is known as an outspoken advocate and has delivered talks and keynotes at festivals and charity galas. She's had op-eds published on CNN and Thrive Global. She served in President Clinton's AmeriCorps and is currently on the advisory board of Equality Now and an ambassador for CA First Partner, Jennifer Newsom's, The Representation Project. Her first children's book, Always Anjali was published in 2018 to wide acclaim. It won the 2019 Purple Dragonfly Storybook Grand Prize (voted on by teachers and librarians) and is set to be a series.

Adam Strom is the director of Re-Imagining Migration. Throughout his career, Strom has connected the academy to classrooms and the community by using the latest scholarship to encourage learning about identity, bias, belonging, history, and the challenges and opportunities of civic engagement in our globalized world.  Before helping to found Re-imagining Migration, he was the director of Scholarship and Innovation at Facing History and Ourselves where the educational resources produced under his direction were used in thousands of classrooms around the world.

Republished with permission from Re-Imagining Migration.