The Reality of Racial Profiling and the Dangers of Stereotyping - Blog 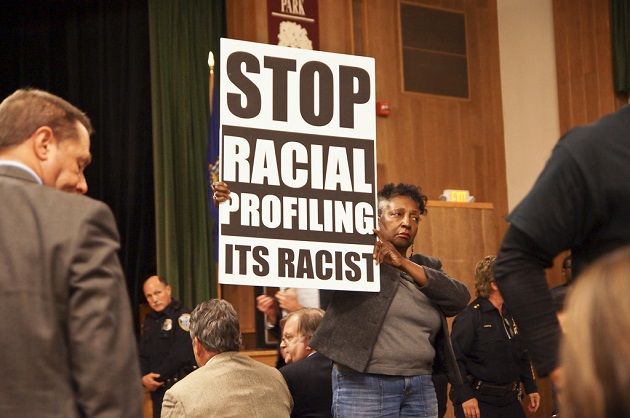 Racial Profiling and the Dangers of Stereotyping

Local student leaders from the Ferguson Youth Initiative wanted a summit to discuss how to make change after the tragedy in their community. In September, teens gathered just miles from where Michael Brown was shot the month before in Ferguson, Mo. They discussed racial profiling and how the relationship between youth and the police needs to change. This tragedy brings out the underlying prejudice that can lead to dehumanization and senseless killing. Young people across the country, like those in Ferguson, need opportunities for dialogue.

This blog won’t focus on the Michael Brown case. Many articles and op-eds have been written from a range of viewpoints. Our focus is on the need for teachers to open dialogue with students from all backgrounds on the reality of racial profiling and the dangers of stereotyping, and to find solutions.

“The nation is listening. Their eyes, their ears are all open. So now it is our chance to elaborate on what we want—what we want to change. Let our voice be heard.”
-- Jayde, a young leader who opened the Ferguson Youth Summit

The Reality of Profiling

In August 2014, at least five unarmed black men in the U.S. were killed by police. In addition to Brown, they include Eric Garner, the chokehold victim who died while members of the NYPD attempted to arrest him; John Crawford, who was gunned down by police in an Ohio Walmart, holding a BB gun he had taken off a shelf; Ezell Ford, who was shot in the back during an "investigative police stop" in Los Angeles; and Dante Parker, who died in police custody in California after being hit by a Taser.

Racial profiling is evident in the disparate treatment of black males in schools and the criminal justice system. Black students are three times more likely to be suspended than their white peers.

One of three black men nationwide goes to prison sometime in his lifetime. That number is one in 17 for white males. Racial profiling and bias create the “school-to-prison” pipeline and profiling tragedies.

Explicit bias and implicit bias are two sides of the same coin, but manifest as different mental constructs. Explicit bias is an overt bias or negative attitude about a racial or ethnic group, or a social identity that is overtly expressed. Implicit bias is unconscious; this unconscious negative association people make about different groups can be more subtle, but also extremely damaging. Whether conscious or unconscious, attitudes and stereotypes like “a black boy wearing a hoodie is dangerous” can lead to horrific results, as in the killing of Trayvon Martin.

A growing body of research points to implicit bias as a significant cause of disparity in the treatment of blacks and Latinos in America. The way to break the daily cycle of implicit and explicit bias and stereotypical attitudes is to create an identity-safe environment for everyone.

Identity safety is a concept that has all people feeling accepted, not in spite of, but because of who they are. It is the opposite of identity theft. Most people are familiar with the idea of having their identity stolen. It refers to someone using their credit cards and robbing their very identity. When people are negatively judged just for being themselves, they are also robbed. Shouldn’t we all be safe from implicit and explicit bias and stereotyping and free to be ourselves?

The events of Ferguson are part of an important national dialogue on issues of race in America and affect you and your students whether you teach in a public, private or charter school or in an urban, suburban or rural community. Giving voice to your students and creating identity-safe spaces is the first step in finding solutions to eliminating bias and stereotyping. Just like the courageous young people at the Ferguson Youth Summit, we need to make the time to be part of the discussion and the solution. Tools for having respectful and productive conversations, where all voices can be heard, and where students listen to each other’s perspectives, can be found below.

Taking the First Step Toward Healing

In the aftermath of the Michael Brown shooting, there has been a lot of finger-pointing. I would contend that we all are like fish that cannot see the water they are swimming in. “Water” that is polluted with toxic attitudes about race is actually what makes such shootings possible.

How can we help our students, colleagues and members of our community go beyond blaming and find ways to end the negative stereotyping and create identity safety? It starts by having meaningful conversations about acceptance, with opportunities to learn one another’s histories and backgrounds. Kids—no matter their gender identity, race or religion—can get to know each other and, together, create a kinder and more accepting society. The responsibility to change our society belongs to each of us.

Resources for Educators and Parents