Note: This blog is a follow up to Amber Chandler’s October 2017 blog, The Flexible Approach to Social and Emotional Learning.

Back in August, I had the amazing opportunity to go on a shopping spree of the best kind: I had been awarded grant money from the NoVo Foundation to implement flexible seating to go along with my “flexible” philosophy that I’ve written about in The Flexible ELA Classroom and The Flexible SEL Classroom.  That’s a whole lot of “flexible,” right? If it seems a little overwhelming to you, imagine my surprise when my dream-come-true classroom hit a few bumps in the road. I’d like to share three lessons for those who are contemplating flexible seating.

So you thought you could handle the chaos

Truth be told, this was my main concern when implementing flexible seating. It isn’t that I had a super-structured classroom to begin with; I run a project-based learning class that is differentiated, creating all kinds of noise, chaos, and sometimes confusion. I’m OK with that. What I found out though is that I’m not OK with all of that while students are bouncing on a yoga ball or pushing themselves across the floor in the office chairs. No one was doing anything wrong, per se; in fact, the yoga balls were definitely serving their purpose, but within the first week I took them home. Don’t judge! I didn’t know anyone’s name yet, and I felt like I couldn’t complete a sentence without becoming distracted.

Another aspect of the chaos that I didn’t anticipate is the total abandonment students have when they are in a cozy space with comfy furniture. My room is adorable when there aren’t students in it. It looks like the remnants of a sleepover when they are sprawled out everywhere, shoes off, continually leaning on each other and generally making themselves at home. I had to remember that the goal of the flexible seating was to create a safe, comfortable and productive space for my students. Believe it or not, their work ethic is awesome, and I’ve found that they can sustain longer periods of tasks like typing when they can get comfortable. Sure, it looks a little unconventional, but isn’t that the point? 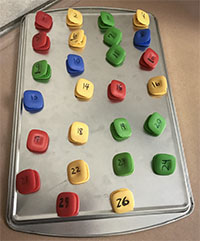 The most frequent questions people ask me are “How do you decide where students are going to sit?” and “What if a student doesn’t like a kind of seat?” To begin the year, I wanted all students to try out the different arrangements. I set up groups and put everyone on a rotation so that in the course of a week they’d experience all of the learning environments. This worked well enough, but it also defeated the purpose of having a classroom where student choice is the point, so I implemented a magnet strategy that I borrowed from Pinterest. Each student is assigned a number. When a student walks in, he or she places a magnet on the quad where the student wants to sit. Each quad has a certain number and type of seats, basically like a station. I started with quads (my room divided into quarters); however, this also made me crazy because that meant groups as large as seven or eight, which is simply too many people to work effectively together. I had to do something different.

In February, I added two more stations, and we now have “squads.” I also brought back the yoga balls. Now that I knew the students better, I could honestly say to them that I couldn’t think while they were bouncing. They now know that we have a system: If I’m talking or another student is presenting, no bouncing. If they are working, bounce away. Students have had no problems with this system, so I’m glad I risked bringing the balls back. Because the students only choose their seats once they have entered the room to stay, and they are not allowed to “save a seat,” I have the most amazingly punctual students. For the first time in nearly 20 years, I can start to take attendance before the bell because everyone is already here! I did create a sort of no man’s land for students who didn’t find a spot that worked well. It is a standing table with stools. Students can move there any time they aren’t feeling good about their work environment. What I’ve found is that we all need very specific systems. I dismiss by squad, they get their computers before they sit down, and the number system is used on most days.

One of the most important considerations, which I highly underestimated, is that choosing the “right” flexible seating option should also be based on practicality and durability. The office chairs have held up great, and they still look nice (I had invested in spraying them liberally with Scotchgard, which was surprisingly expensive, but worth it). The beanbags were pretty much pancakes by Christmas, but they remained a coveted squad. I did some research and found that the filling would cost nearly as much as the beanbag chairs themselves, so I decided to simply restuff them with old clothes, towels, mismatched socks, etc. This seems kind of weird, but it actually made the beanbags function better, as they were fuller and heavier. The yoga balls are awesome, and when they start to look a little worse for the wear, I can pump them back up. The gaming chairs are great, but absolutely no one sits in them “correctly,” so if you are OK with students lying flat on their backs with their feet in the air half the time, they work wonderfully.

The two worst choices I made were also extremely popular. I had bought a number of bungee chairs, and for a little while they were great. Then, I’d look back and students would be tangled in the bungee, rear end on the floor. It didn’t look comfortable or safe, so I took them away at Christmas. I also had bought those half-saucer type chairs. Students loved them; the problem was that the constant use and the continual plopping down in them wrecked the fabric, so they had to go too.

I can honestly say that it has never once crossed my mind that I should go back to traditional desks and tables. If I could do it all again, I’d invest in a couch, but back in August, I was too overwhelmed to try to orchestrate delivery. Students love our space as much as I do, and I have watched kids who typically are not invested in school rush to my room to get the best seat. I’ve watched that kiddo who needs to move find a way to balance the need to be productive with the need to fidget. I’m always excited when someone who doesn’t know about my room comes in. They don’t always know what to make of it, and that’s OK. Perhaps the biggest lesson I’ve learned is that flexible seating is going to be an evolution and will require me to be flexible with my expectations of what it is “supposed to be.” If you are interested in giving it a try, I’d love to chat with you! Contact me via twitter @MsAmberChandler or leave a comment below.

Amber Chandler is a National Board Certified middle school ELA teacher in Hamburg, New York with a Master’s Degree in Literature, as well as a School Building Leader certification.

Your article is really helpful. Thank you for sharing this.

Take Steps to Benefit Your Heart

Resources for a Global Civics Education