D-Day at 75: Stories from WWII Veterans

In June 6, 1944, more than 160,000 Allied soldiers landed on five different beaches in Normandy, including Utah, Omaha, Gold, Juno and Sword. Operation Overlord, the codenameset the stage for liberation of German-occupied France during World War II. The battle was the largest amphibious invasion in history and involved more than 5,000 ships and 13,000 aircraft. Once the beaches were secured, thousands more Allied troops moved into northern France. For those who participated in the critical mission, the challenges they faced and the losses they suffered were immense. Special correspondent Malcolm Brabant speaks to veterans commemorating D-Day’s 75th anniversary.

Watch the videos and answer the discussion questions below. You may want to turn on the “CC” (closed-captions) function and read along with the transcript here.

2) What do you know about D-Day? Why was this operation so critical to the war?

3) Many veterans carry the scars of war with them throughout their lives. PFC. Russell Picket shared his regret he wasn’t quick enough in action to save more lives; at the same time, he correctly realizes there is nothing more he could have done. How could you learn more about stories like Picket’s? Why do veterans not often share their stories from wartime? What do you think it took for Picket to share his story?

4) “Don’t let it happen again,” said Staff Sgt. George Mullins. What do you know about how the U.S. government decides what military operations to take part in? What goes into these decisions? Who is involved? How could you find out more about the decision to go into France 75 years ago?

5) World War II veteran Brad Freeman said, “We knew what we were coming for. We were ready,” adding, “We were just all kids.” What do you know about the draft? Why was it important for Freeman, whose story was featured in the HBO series “Band of Brothers,” to have the support from fellow service members?

6) Media literacy: Check out three or four other news outlets’ coverage of the 75th anniversary. What headlines do you see? Who is interviewed? Are primary sources like the one in the extension activity below part of the story? How does watching the news coverage make you feel? 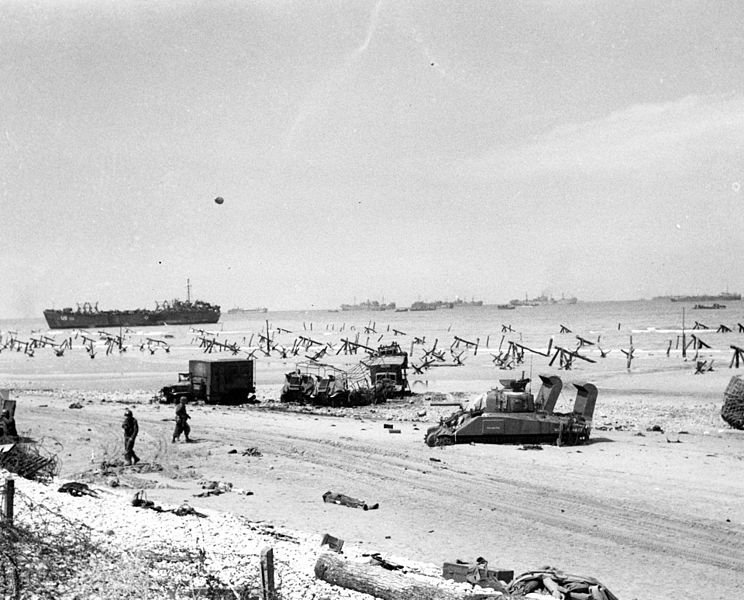 On Wednesday, President Donald Trump read from a prayer in Portsmouth, England, delivered by President Franklin D. Roosevelt as he gathered with other world leaders and veterans for the 75th anniversary of D-Day. Ask your students: Why do you think Trump chose this particular piece to read?