DACA provides all students with a lesson in social justice 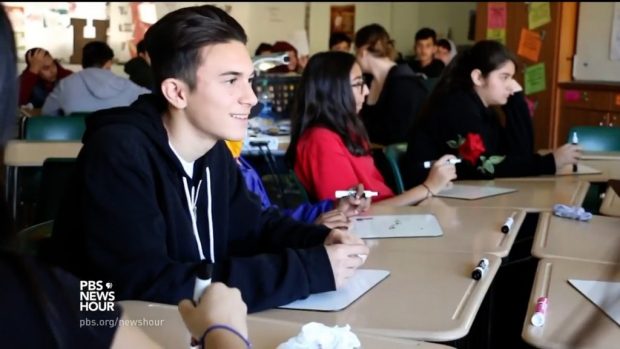 1. California is home to more than 270,000 undocumented students enrolled in public school, the largest number in the country.

2. Anxiety levels of undocumented young people are growing due to the Trump administration’s promise to crack down on illegal immigration

3. In September, Trump announced that he would end DACA (Deferred Action for Childhood Arrivals) protections this March unless Congress could come up with legislation he could stand behind.

4. A growing number of California educators are receiving training to become advocates for undocumented students. The aim is to provide resources, including the steps necessary to graduate high school, financial aid information and counseling.

1. Essential question:  How does the debate over DACA give students and teachers an opportunity to engage civically?

2. Why are teachers independently choosing to receive training about DACA?

3. “Politics should never come in to it when it comes to young people’s education,” stated school board member Cecilia Iglesias. Do you agree or disagree? Explain your response.

4. Can you think of other examples when controversial issues have been taught in schools and used as a tool for learning?

5. Do you see DACA as an issue of social justice? Why or why not?

undocumented immigrant — a person present in the U.S. without proper authorization

DACA (Deferred Action for Childhood Arrivals) — a U.S. immigration policy ordered by President Obama as an executive action that allows certain undocumented immigrants to the U.S. who entered the country before turning 16 and before June 2007 to receive a renewable two-year work permit and exemption from deportation

Dreamer — a term used to describe young undocumented immigrants who were brought to the United States as children, who have lived and gone to school here, and who in many cases identify as American (Anti-Defamation League)

2. To explore what immigration looks like at the grassroots levels across the country, watch New Americans produced by Student Reporting Labs. Then complete the following short activity:

Visit PBS NewsHour Extra for more education resources designed to help teachers and students identify the who, what, where and why-it-matters of the major national and international news stories.  @NewsHourExtra

On September 5, 2017, President Trump ordered an end to the Deferred Action on Childhood Arrivals (DACA) program. This program shields some young undocumented immigrants —who often arrived at a...

Help students understand that their voices are integral to the story of the United States with six lesson plans that investigate individual and national identity....

Join Teaching Tolerance, National Immigration Law Center and Share My Lesson for a webinar on protecting our students in an anti-immigrant climate.