National monuments: Whose job is it to protect public lands? 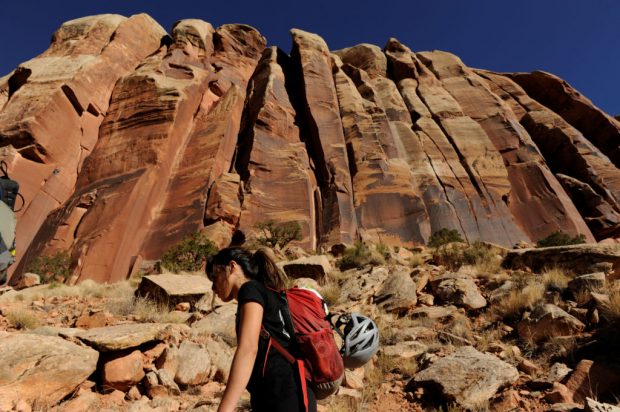 2. Have you heard the saying 'A picture is worth a thousand words'?  How about 'There's always two sides to a story'? Pictures are an important tool for both adults and young people to understand the world around them. Just look at social media! Take a look at these three images below and read their captions. What picture starts to form in your mind about the national monuments issue? What could you do to find out more about the stories of the two people featured in the pieces?

Visit PBS NewsHour Extra for more education resources designed to help teachers and students identify the who, what, where and why-it-matters of the major national and international news stories.  @NewsHourExtra

Earlier this year, President Trump signed an executive order that directed the Interior Department to review certain national monuments which are lands that were set aside by former presidents...

The U.S. National Parks system began in the late 19th century. Over time, the rationale for National Parks has expanded from simply maintaining scenery for tourists to restoring original...

In this lesson, students watch a 14-minute film, "Among Giants" by Rainhouse Cinema, about an environmental activist who risks injury and incarceration to protect an...

To have students analyze and...

There are National Parks all around the world and each one can show us examples of a warming planet. Petroglyph National Monument is a small 7,000 acres park located on the westside of Albuquerque...

Gray wolves were re-introduced into Yellowstone National Park in 1995, resulting in a trophic cascade that has benefited the health of the Yellowstone ecosystem. In this lesson, students explore...