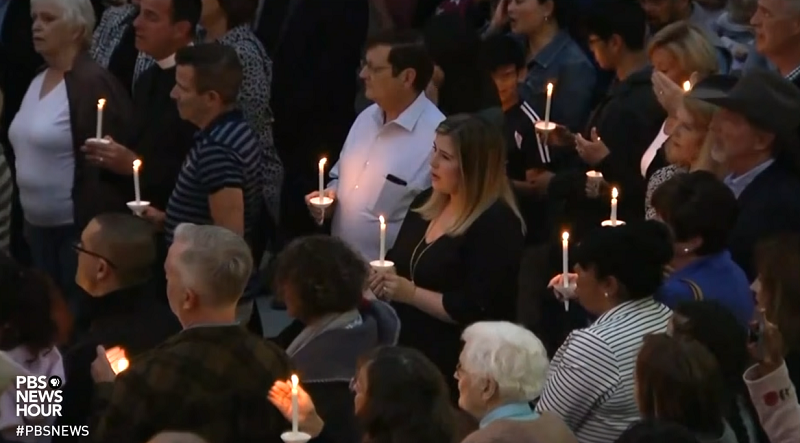 Directions: Read the summary, watch the videos and answer the discussion questions below. You may want to turn on the “CC” (closed-captions) function and read along with the transcript here. If time is of the essence, you may wish to stop the video at 2m:18s.

Teachers’ note: Use this link to see a full list of resources on how to speak with children about gun violence, including in the immediate aftermath of a mass shooting. Resources are from a variety of organizations and for students of all ages. Use the resources that work best for you.

Summary: On April 27th, a gunman stormed the Chabad of Poway synagogue in Poway, Calif., in a San Diego suburb, where 100 worshipers were gathered. One woman, 60-year-old Lori Gilbert-Kaye, was killed, and three people were injured. One congregant was able to charge the gunman and force him out of the synagogue. The 19-year-old alleged shooter was inspired by white supremacy and posted an anti-Semitic manifesto on the internet hours before the shooting. The attack took place at the end of Passover, which is meant to be a celebratory time for Jews. Offerings of support have been flooding in for all of those affected, as the government grapples with how to stop the increase in anti-Semitic violence.

1) Essential question: Why is anti-Semitism increasing in the U.S.?

3) Do you think the U.S. government has done enough to prevent and deal with domestic terror attacks? Explain your response.

4) Nick Rasmussen of the McCain Institute for International Leadership suggests including more domestic terror incidents under the PATRIOT Act or another terrorism statue that allows the government to investigate possible terrorism suspects. Do you think this would improve the U.S. government’s ability to prevent acts of terrorism? Why or why not?

5) Media literacy: NewsHour’s Amna Nawaz raises the concern that Rasmussen’s idea could give the government too much authority over tracking people’s communications and possibly infringe upon their free speech. Can citizens’ privacy still be protected during threats of terrorism?

1) The deadly California synagogue shooting is the latest in a series of attacks that raise profound questions about keeping sacred spaces safe. Watch the video from NewsHour: “How the US should respond to the growing wave of domestic terror attacks” and answer the questions below.