What Do You Know About Tribal Sovereignty?

This guest blog, by National Board-Certified educator Julie Hutcheson-Downwind, walks readers through an understanding of the role and history of tribal sovereignty that should be common knowledge for all Americans. Additionally, Ms. Hutcheson-Downwind concludes with an example of what this can and should mean for our students. The Albert Shanker Institute, whose offices reside in the ancestral land of the Anacostans (also documented as Nacotchtank), and the neighboring Piscataway and Pamunkey peoples, is committed to strengthening our collective understanding of and respect for historic and contemporary tribal sovereignty. 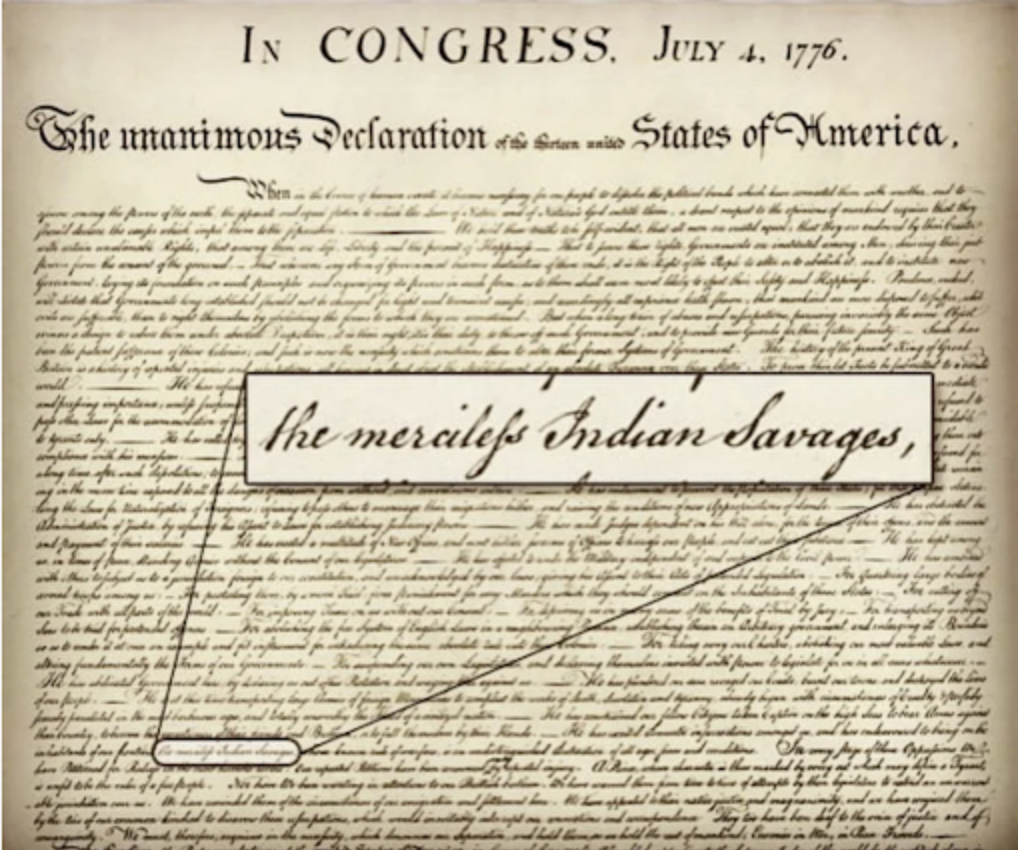 “He has excited domestic insurrections amongst us, and has endeavored to bring on the inhabitants of our frontiers, the merciless Indian Savages, whose known rule of warfare, is an undistinguished destruction of all ages, sexes and conditions."

The definition of tribal sovereignty is “independent of all others.”

When applied to government, sovereignty refers to independent self-governing nations. For Indigenous nations within the United States, sovereignty is the right to determine their own future. American Indian tribes, through elected tribal governments, retained the right to operate as self-governing nations. Tribes have a unique and inherent political status that sets them apart from all other racial and ethnic groups in the United States. This legal political status conveys dual citizenship with specific rights and responsibilities.

What is the History of Sovereignty?

In order to attain land to expand the United States, the US government signed treaties with many tribal nations. This affirmed the inherent sovereignty as treaties are only signed between two nations. The inherent powers of tribal nations, as acknowledged under House Concurrent Resolution 331, include: the power to determine the form of government; to define conditions for membership in the nation; administer justice and enforce laws; to tax; to regulated domestic relations of its members; and to regulate property tax.

Tribal nations have a history of operating in accordance with democratic principles. One example is the Haudenosaunee (Iroquois Confederacy). Each nation within the Haudenosaunee selected representatives to deliberate and agree on common actions. Today, tribal members elect representatives to tribal councils to make decisions in the best interest of the tribal members.

How did Treaties Determine Sovereignty?

In all treaties with the United States government, tribes retained the right to form and maintain their own governments. This was never a right given to tribes as a result of treaties. This right has been upheld since the 1830s when federal courts affirmed a trust responsibility to the tribes. That responsibility includes the protection of tribal rights and interest particularly with regard to tribal lands and resources. In the treaties tribes agreed to cede vast segments of their homelands in exchange for honoring their right to retain small segments of this land for tribal members in common. The treaties included provisions which guaranteed the tribes government services in the areas of education, health and technical assistance. Some treaties guaranteed tribal members the right to hunt, fish, and gather resources in a customary manner on ceded lands.

How did Federal Policies and Practices take away rights guaranteed by Treaties?

The United States government did not honor the treaties it made with the tribes. Federal policies and laws eroded tribal rights and took more land away than was provided in the treaties. Although the right of tribes to govern their own nations has been affirmed by treaties; federal laws, executive orders, and federal policies have eroded the tribes’ freedom to exercise this sovereign right.

Congress used constitutional powers as justification for passing laws and approving treaties and agreements to regulate trade with tribes. Later Congress passed legislation which interfered with internal affairs of tribes and assumed plenary power over them. The United States courts have supported the plenary powers of Congress. The Dawes Act of 1887 also impacted land loss by allotting land to individuals rather than keeping land in common.

What do Students Need to Know about Tribal Sovereignty?

Students should be able to name the tribe whose homeland they live on. This is often done through a Land Acknowledgment. For example, “I acknowledge that I am standing on the ancestral land of ________________ nation,” followed by a call to action.

Students should be able to explain how Indigenous tribal members are not only a racial or ethnic group, but have a political status with dual citizenship. They are members of their own tribal nation and citizens of the United States.

Republished with permission from the Albert Shanker Institute.

Teaching About Tribal Sovereignty and the U.S. Constitution

Join the Albert Shanker Institute and Share My Lesson on demand for an engaging session with experts on tribal sovereignty.

The Share My Lesson team has selected a variety of free lesson plans, educational resources and classroom materials to support you while celebrating Constitution Day with your students.

The Albert Shanker Institute is a nonprofit organization established in 1998 to honor the life and legacy of the late president of the American Federation of Teachers.